Why renewable energy is booming in Iran

Unshackled from crippling nuclear-related sanctions but faced with low oil prices, Iran turns to renewable energy in preparation for the future. 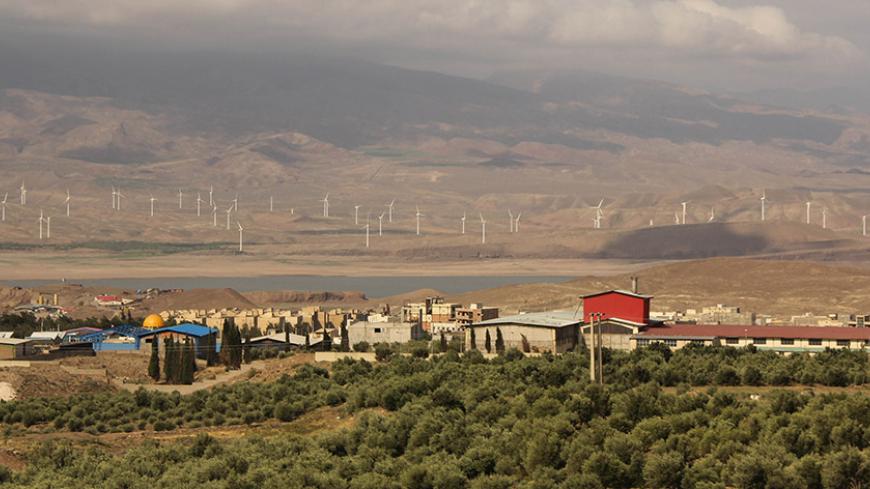 TEHRAN, Iran — On Sept. 10, Iran and Russia launched a project to add two new 1,000-megawatt (MW) reactors to the already existing 1,000-MW reactor at the Bushehr nuclear power plant in the southwest of the country. The operating plant was connected to Iran’s national grid in September 2011, following a long series of delays and technical problems, and amid a dispute between Tehran and the West over Iran’s nuclear program.

Iran, with a population of over 80 million, has the fourth-largest oil reserves and the second-largest natural gas reserves in the world. But despite its rich hydrocarbon resources, the country is pursuing projects to construct more nuclear reactors as part of efforts to increase its reliance on renewable energy sources as it has an advantageous topography for renewables.

Under such a policy, Iran has in the past years taken measures to increase power capacity via sources such as wind, solar and geothermal. Projects to produce 600 MW of electricity through wind and biomass and the construction of a 50-MW geothermal power plant in the northwest of the country are among these measures.

According to official figures, Iran’s existing power generation capacity stands at 74,000 MW, of which nearly 200 MW is currently produced via renewable sources, mainly solar and wind. However, the renewable energy production capacity is predicted to reach 5,000 MW in the next five years, under Iran’s sixth Five-Year Development Plan that envisions the construction of new power plants with a total capacity of 26,000 MW.

The sixth development plan also requires the government to focus on clean energy to protect the environment. Rik Teeuwen, the project manager of Solarplaza’s Renewable Energy Trade Mission Iran, told Al-Monitor that for Iran, which is among the nearly 200 countries committed to the 2015 Paris climate deal that calls for cutting emissions, renewable energy is a major tool to reduce impact on the environment as it reduces the use of fossil fuels and saves water.

“If you can get wind energy and solar energy cheaper than old ways of generating, you save money and you can sell the fuels you don’t need to other countries at a premium,” Teeuwen, the manager of the Netherlands-based private firm, said.

Teeuwen also believes that renewable energy helps Iran attract foreign capital, which benefits both its local industry and employment. With Iran already attracting foreign investment in renewable energy, he believes that the country “definitely is well underway” to become a regional electric hub that will significantly export electricity in the years to come.

To help speed up renewable energy production and fulfill the set targets, the Iranian government has facilitated investment rules and offered incentives to encourage both local and foreign investors to cooperate on the renewables sector. Energy Minister Hamid Chitchian said in July that the purchase guarantee period will be increased from five years to 20 years to further support domestic production, while the guaranteed purchase price will be raised by 30% for companies that use local technology and equipment. Jafar Mohammadnejad Sigaroodi, a senior official at the Renewable Energy Organization of Iran (SUNA), which is the central institution in charge of renewable energy, has mentioned other incentives.

“We have facilitated the permit issuance process that investors need to go through, including permits demanded by the Department of Environment. Moreover, based on the talks held between the ministries of Energy and Economy, foreign investment in the sector will be guaranteed. This is an important step as it is a cause of concern for many foreign investors,” Sigaroodi, the deputy chief for planning and development at SUNA, told Tehran Times in April.

Government measures appear to have been successful enough to attract foreign investors whose presence, according to Iranian officials, has increased following the nuclear deal. European firms from Germany, Italy and Denmark as well as companies from Norway, China and South Korea have either reached agreements or expressed readiness to cooperate with Iran to boost its renewable energy production.

Giles Dickson, the CEO of the European Wind Energy Association, who traveled to Iran in July, has also announced his organization’s readiness to encourage European investors to have a more active role in Iran’s renewable energy projects, particularly wind energy, as Iran enjoys high potentials in wind energy — even more so than Europe.

To learn more about why Iran has focused on renewable energy in recent years, Al-Monitor spoke with Mohammad Reza Babaee, an economic strategy expert in Tehran who believes that the importance of sustainable development and the necessity of supplying energy needs for future generations make the use of renewable energy more than reasonable.

“There’s a strategic need for oil and its refined derivatives in the future. At the same time, fossil fuels will definitely be used up, and renewable energy can gradually replace them to meet Iran’s growing household and industrial needs for energy,” Babaee said.

Pointing to the fact that renewable energy can also help the country have more control over possible price fluctuations in fossil fuels, Babaee said, "Other than being a source of improved energy security, renewable energy provides Iran with export opportunities as well.”

As Iran’s significant resources of solar, wind and geothermal energy along with its special geopolitical location has made the country one of the best areas for investment in renewable energy, experts like Babaee and Teeuwen believe that Iran could become an electric hub in the region to export the produced electricity, as its production could exceed local demand in coming years.

Up until last year, when nuclear-related sanctions against the country were still in place, Iran’s plan for investment in renewable energy projects would have appeared highly ambitious and very difficult to achieve. But with the removal of major restrictions on foreign investment in Iran, in the eyes of many experts, the country’s investment goals of $10 billion by 2018 and $60 billion by 2025 now appear quite feasible.

Experts say development of the industry involves various challenges, including aged or underdeveloped infrastructure or a lack of expertise in certain specialized renewable energy technologies. But many believe that the government’s strong commitment to diversifying its energy mix and modernizing its infrastructure along with local and foreign investors’ interest to invest in renewable projects leaves little doubt that Iran is moving in the right direction.