Hamas has released Zaki al-Sakani from prison, raising questions of whether it was part of a deal between Hamas and Mohammed Dahlan, with whom it just restored relations. 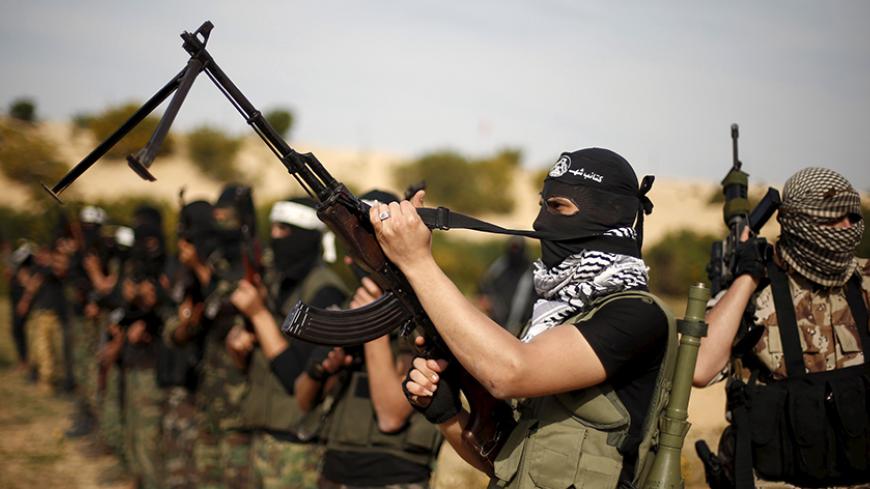 Palestinian militants from the al-Aqsa Martyrs Brigades take part in an anti-Israel military drill in Rafah in the southern Gaza Strip, March 25, 2015. Their leader, Zaki al-Sakani, was released from Hamas custody on Oct. 19, 2016. - REUTERS/Suhaib Salem

Sakani was arrested by the Hamas government security services on Aug. 2, 2008, after sustaining abdominal injuries during armed clashes. The [Hamas] judiciary laid several charges against him, most importantly for forming terrorist groups, planning terrorist attacks, possessing and manufacturing explosives, and involvement in the Gaza beach explosion that killed five members of Izz ad-Din al-Qassam Brigades as well as a child on July 25, 2008. He was sentenced to 15 years in prison, a term that was later on reduced to 10 years.

Sakani left for Cairo with a temporary passport 24 hours after his release, he told Al-Monitor over the phone. “I bid my nuclear family — my wife, children, mother, brothers and sisters — farewell at the family house a few hours before leaving the Gaza Strip. After that, I went straight to the Rafah crossing. The Gaza Interior Ministry prevented me from bidding my other relatives or neighbors farewell.”

He said that the Gaza Interior Ministry kept him from telling anyone about his release to avoid being welcomed by a crowd of friends and relatives, and he could just see his nuclear family.

Sakani pointed out that he will receive treatment in Egypt for complications caused by his severe injury during his arrest and recover there. Then, he will travel to Saudi Arabia to perform umrah. He continued, “After that, I will try to return to the Gaza Strip, because nothing will stop me from going back to my hometown. On my return, there will be communication between Hamas' political bureau and me to guarantee my freedom and ensure that I will not be arrested by Hamas.”

Two-thirds of Sakani’s sentence had been served a year and a half ago. Palestinian law allows convicts to be release upon serving two-thirds of their sentence for good behavior. He said he knew that the Gaza Interior Ministry was willing to free him after serving that time, but he did not know when it would happen.

Sakani’s release coincides with a rapprochement between Hamas and Dahlan, raising questions on a potential agreement. Sakani revealed there were previous communications between Samir Mashharawi, a Fatah leader and close associate of Dahlan, and Mousa Abu Marzouk, a member of Hamas’ political bureau, in efforts to free him.

He explained, “There are strong ties between Mashharawi and me. He had communicated with Abu Marzouk to ask why I was still in prison until that moment, when my health was so poor. For his part, Abu Marzouk instructed Hamas and the Gaza Interior Ministry to set me free.”

He added, “I spoke to Mashharawi, and I asked him whether or not a deal was concluded. He laughed and replied that I am important to him. He assured me that no deal was concluded with Hamas, and that there were communications with Abu Marzouk, after which I was released.”

Gaza's Interior Ministry Spokesman Iyad Bezm told local news agencies Oct. 20 that Sakani was released after serving more than two-thirds of his jail term and that he went to Egypt for treatment.

Whether Sakani’s release was part of a comprehensive deal or just the result of communication between Dahlan's current and Hamas, it is a sign that Hamas is playing some of its cards to deliver positive messages to Palestinian and international parties, said Ibrahim al-Madhoun, a political analyst close to Hamas.

He told Al-Monitor, “I believe that Sakani was a card used by Hamas, in light of the complex situation, to end the accusations of political detention by freeing the one whose name has circulated the most. It is also a message to President Mahmoud Abbas that [Hamas] has in its possession many cards that would clearly affect developments on the Palestinian arena, particularly regarding his opponents and rival Dahlan. In addition, [Hamas] wants to appease regional parties, particularly the Egyptian regime. It is well aware that Sakani’s release will be well appreciated by Egypt. In fact, positive signs have emerged, starting with the opening of the Rafah crossing.”

Madhoun believes that Sakani’s release was not part of a deal. The release of a figure of Sakani's stature, however, is noteworthy and usually accompanied with special and detailed arrangements, he said.

He noted, “In addition to the fact that Sakani is a figure that has importance and ties, there are parties that are trying to take advantage of his release. For instance, Dahlan would love to be viewed as the "man of the moment" who cares about every Fatah member and deserves to lead Fatah and the Palestinian Authority more than Abbas, who cares less about Fatah’s members. This is why Dahlan strived to have many pictures showing him and his men and Sakani together and exaggerated their meeting.”

Whether or not Sakani’s release was part of a deal between Hamas and Dahlan, it is likely a sign of the normalization of ties between both sides following communications between Hamas’ political bureau and close associates of Dahlan. These developments follow more than nine years of rupture since the 2007 Fatah-Hamas conflict that resulted in Hamas’ takeover of Gaza.