The man behind potential breakthrough in Hamas-Egypt ties

Hamas and Egypt appear to be adjusting their attitudes toward each other, and Fatah’s dismissed leader Mohammed Dahlan probably has a role in this regard. 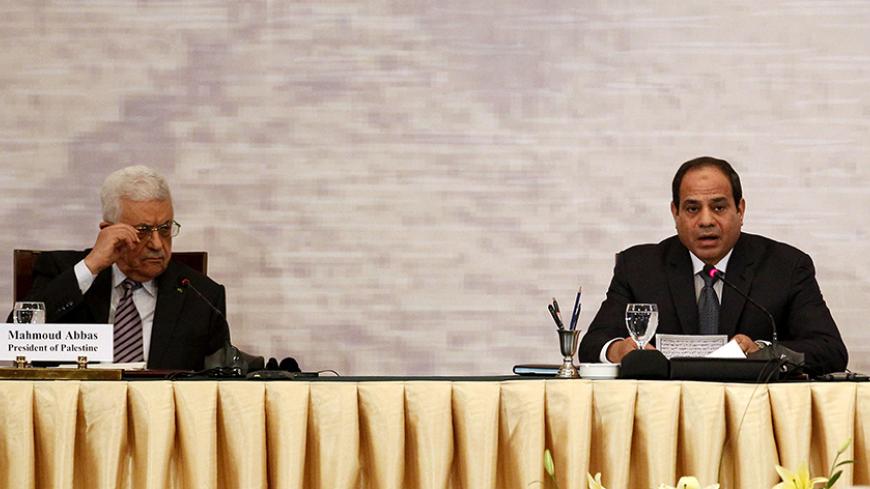 The relationship between Egypt and the Hamas party in Gaza might be thawing a bit, though no one seems to be interpreting Cairo's recent steps toward reconciliation as altruistic.

“It is safe to say that the gradual rapprochement between Hamas and Egypt is an Egyptian act of defiance, aimed at pressuring Palestinian President Mahmoud Abbas into responding to Egyptian demands that Abbas reconcile with his arch rival [dismissed Fatah leader] Mohammed Dahlan and get him ready to succeed him," Raed Enairat, a political science professor at An-Najah National University in Nablus and the head of the Contemporary Center for Studies and Policy Analysis, told Al-Monitor.

"The coming period will prove whether the Hamas-Egypt convergence is tactical or strategic, as it is linked to the extent to which their mutual interests will be achieved. These consist of permanently opening the Rafah crossing and preserving the Sinai security from the Gazan side. Yet it is clear that the godfather of this rapprochement between Hamas and Egypt is Dahlan, who wants to be accepted by both sides,” Enairat said.

Hamas seems well-aware that Egypt's gestures actually arise from Cairo’s desire to win battles on two fronts, namely against Hamas and Abbas. Cairo may be seeking, at least at the current stage, to neutralize Hamas until Cairo settles its confrontation with Abbas in favor of Dahlan.

Humanitarian steps recently taken by Egypt toward Gaza coincide with a significant decline in the relationship between Cairo and Fatah in the West Bank and a chill between Abbas and Egyptian President Abdel Fattah al-Sisi, due to the latter’s support for Dahlan. Fatah, which is Hamas' rival party, is experiencing a rift over support for Dahlan to replace the aging Abbas, who is 81.

In an interview with Al-Monitor, Amin Maqboul, secretary-general of Fatah’s Revolutionary Council, refused to speak of Dahlan’s role in the rapprochement between Hamas and Egypt and said the relationship between the Fatah-led Palestinian Authority and Egypt is fine. "We welcome any rapprochement between the Palestinian and Arab brothers, as the most important thing is to end the Palestinian division [between Hamas and Fatah] that has been ongoing since 2007.”

In what seemed to be a sign of goodwill, Egypt invited 100 businesspeople and merchants from Gaza to an Oct. 30 economic conference in a bid to improve commercial activity and put forth ideas aimed at facilitating trade and easing the movement of goods and merchants at the Rafah crossing.

Egypt's tight-fisted grip on the crossing has long been a source of immense frustration among Palestinians. So recently, when Egypt temporarily opened the Rafah crossing to students, sick people and owners of residences outside Gaza, it was a significant move. From Oct. 16-23, 4,000 people traveled from Gaza.

Also, on Oct. 20, Egypt released seven Gazan pilgrims who were detained Sept. 24 on charges of possessing undisclosed banned substances. The pilgrims were arrested as they returned from Saudi Arabia, where they had performed the hajj.

Another development in the Cairo-Hamas relationship was revealed when the Israeli al-Masdar website announced Oct. 15 that Hamas had foiled an attack against the Egyptian army planned by a four-member terrorist cell in Gaza. The cell members reportedly had planned to use Kalashnikov assault rifles but were arrested by security forces in Gaza. Investigations are underway to determine the cell’s relationship with the Islamic State (IS) in Sinai Peninsula, the website added. News of the arrests was also reported Oct. 16 by Al-Masry al-Youm newspaper. No date was given for when the arrests were made.

The story was considered especially important because of the deteriorating security situation in Sinai. Most recently, IS attacked an Egyptian security checkpoint in northern Sinai on Oct. 14, and 12 Egyptian soldiers were killed.

Also, the Egyptian military said it destroyed a large collection of explosives Oct. 19-22 when it bombed storage sites at Rafah and Sheikh Zuweid in Sinai near the Gaza border.

So there appears to be movement by both Hamas and Cairo. Hamas spokesman Sami Abu Zuhri recently told Al-Monitor, “Many contacts were made between Hamas leaders and Egyptian officials to confirm Hamas’ keenness on having a good relationship with Cairo, as well as its desire to promote such a relationship in a way that serves the interests of the Palestinian people and preserves Egypt's historical role. Hamas is keen on having a good and positive relationship with Cairo. The movement recently suggested sending a delegation from the Hamas leadership to Egypt as a goodwill gesture amid positive Egyptian signs toward Hamas.”

It seems too early to tell how stable the Hamas-Egypt relationship currently is, given the extent to which this connection is linked to other issues, including the future of the Sinai security situation, the Rafah crossing opening and Dahlan’s role. Egypt and Hamas want to keep communication open — at least regarding humanitarian and living issues — as a prelude to improving their relationship on political and security levels.