Gaza agriculture on brink of collapse

With new Israeli encroachment in the name of security and restrictions on the importation of chemicals and fertilizers, even more of Gaza's farmers are being forced to abandon their lands despite a near-total lack of other employment options. 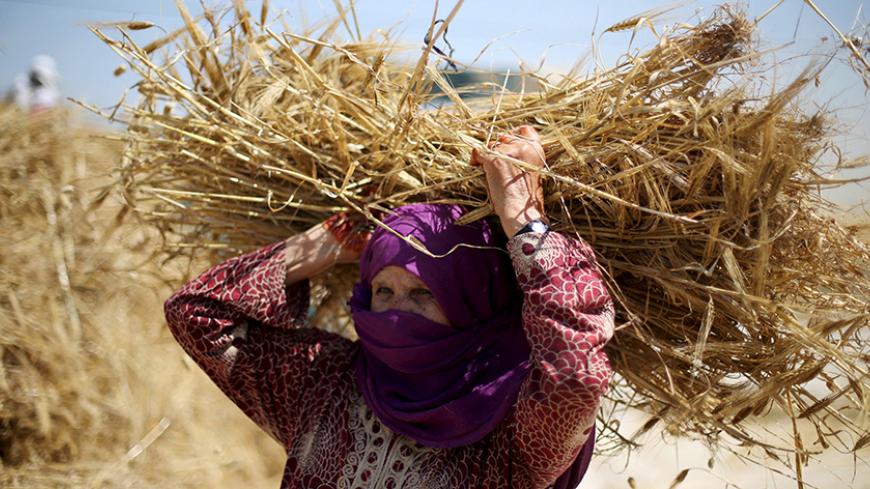 With small manufacturing plants in the Gaza Strip shutting down one after the other and the bigger ones barely holding on against impossible odds, agriculture there is next in line for a resounding crash.

Unlike other manufacturing sectors, the farmers’ economic downfall will have immediate and dire consequences for residents of the Gaza Strip. Even now, the UN’s Relief and Works Agency regularly supplies more than half the residents with sacks of flour, rice, sugar and oil. Fruits and vegetables grown locally make up an important part of their meager diets.

The slow ruin of Gaza’s agricultural sector began about a decade ago, when Hamas came to power and Israel imposed a blockade on the Gaza Strip. But farmers were dealt a near fatal blow by the 2014 Israel-Hamas war, known as Operation Protective Edge, and are having a hard time recovering. Now farmers are saying that what little remained after the war has been wiped out in recent months. It would appear that the death throes of Gaza’s agriculture are yet another stage leading to the eventual declaration of Gaza as unfit for habitation, as the UN foresaw in a report issued about a year ago.

According to farmers who spoke with Al-Monitor, Israel's severe restrictions on bringing in essential farming products are leading farmers to abandon their lands. If immediate measures are not taken, they say, the already harsh conditions will further deteriorate. “This will be the end of Gaza’s economy,” said Rashid Abu Warda, a landowner from the Gaza town of Khan Yunis.

In an interview with Al-Monitor, Abu Warda claimed Israel blocks imports of fertilizers and other chemicals, which Israel claims help Hamas manufacture explosives. In addition, he said, iron for the construction and maintenance of hot houses is hard to come by. “As a result, most farmers in Gaza are at a point where they have no choice but to give up,” he said. “But farming is the main basis of existence of many families. Without it, all is lost.”

Engineer Mohammed al-Bakri, the director of the Gaza Agriculture Department, told Al-Monitor that the number of farmers in Gaza is at a record low. More than a third have lost their assets, he said, and another third can no longer make a living off their land and have had to seek other sources of income, usually without much luck. According to Bakri, since Operation Protective Edge, the number of those tilling their lands and growing crops has dropped from 65,000 to 18,000.

Bakri said that before Hamas took over and Israel imposed its embargo, there were more than 100,000 farmers in the Gaza Strip. They employed hundreds of thousands of laborers and managed not only to supply the residents’ domestic needs, but even export fruit and vegetables to markets in Israel and the West Bank.

Bakri explained that most of those who have stopped cultivating their lands are relatively small landowners with a long family tradition of farming. “They provided for their entire extended families with produce they grew on lands they inherited, and now they have no food and no way of making a living. They have no other profession other than their know-how in the growing of fruit and vegetables. Where will they go? Where will they find work in Gaza, with unemployment so widespread that we’ve stopped counting?”

But even the larger landowners can no longer hold on to their lands and plant and harvest wheat. Abu Warda explained that salt intrusion into much of the land in the Gaza Strip is making the cultivation of crops that previously flourished there impossible.

He also said that most of the bigger farms are located outside the towns and most, given Gaza's geography, lie along the border with Israel. These are mostly in the northern part of Gaza (near the towns of Beit Hanoun and Beit Lahiya) and extensive areas in the southern part of Gaza (near the towns of Khan Yunis and Rafah). The Israel Defense Forces clear these areas extensively of vegetation for visibility as they watch for terrorists trying to infiltrate Israel.

According to Abu Warda, Israel occasionally expands its “restricted zones,” forcing the owners to abandon thousands of acres once used to grow fruit and vegetables. He also claims that Israel sprays massive areas with defoliants that inhibit crop growth, including areas outside the restricted zones.

“We’re no longer even thinking about modern agriculture of the kind you have in Israel,” he said, “and we’re not worried like other farmers about weather hazards and market price levels. We’re talking about the most basic existence, and new troubles are always raining down on us. There’s no way to maintain the agricultural sector in Gaza anymore.”

The dire state of farming in Gaza is similar to the desperate straits of Gaza’s traders, who claim Israel has revoked the permits that allowed them to travel to the West Bank. Thus, step by step, Gaza is gradually becoming unfit for habitation by the 1.8 million people who still live there.