The global carefree cat meme, Tombili, is honored by a bronze statue as a result of an internet petition by locals after his death in his quiet Istanbul neighborhood. 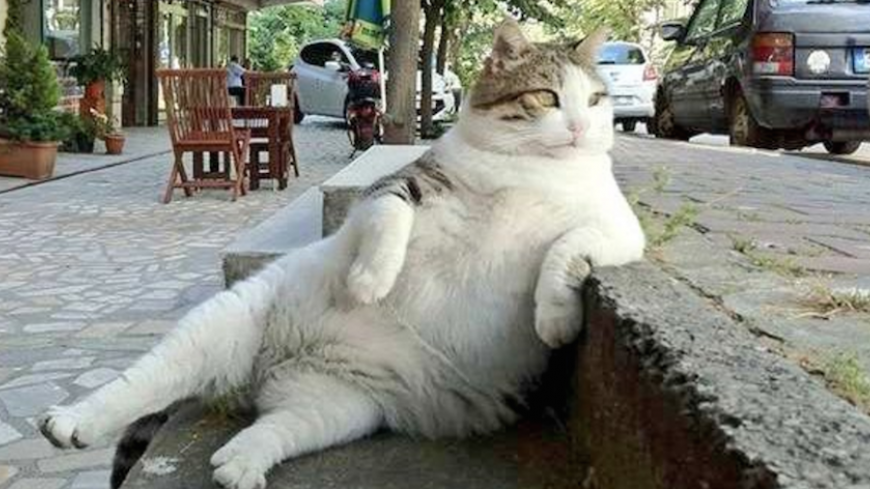 The late Tombili the cat rests on the streets of Istanbul in this undated photo. - TWITTER/Number 10 Cat

I received the famous photo of Tombili, now a meme for cat lovers everywhere, by email from a Greek friend. He said, “This is the spirit of the Aegean, not just chilling but always ready to take on the world.” It was a photo of a chubby, white-bellied cat with one arm hugging the pavement as if he were imitating a man. The photo became an instant hit on social media, shared thousands of times with captions, comments and add-on images such as raki (the anise-scented traditional alcoholic beverage of Turkey) glasses, worry beads, teacups and backgammon sets.

Witty captions paired with the famous Tombili photo gave people smiles even in the most distressed times. For example, after Gezi Park protesters were brutally attacked by police and everyone was asking who gave the order, Tombili’s photos circulated on social media with the caption, “I gave the order.” It was a satirical and smooth way of handling Turkish leader Recep Tayyip Erdogan's having told cheering crowds, “I gave the order to the police.” Later, the "I gave the order" cat meme became a phenomenon in Turkey as several other harsh orders for crackdowns came in, and the public was not sure how to handle them. Hence, Tombili’s rowdy pose became one of the most potent mediums for dark satire in Turkey. After all, who can dismiss a cat with such a carefree pose?

The rowdy cat craze went global when 9gag (an online platform and social media website) posted Tombili’s unique resting pose. Tombili was known in the Ziverbey neighborhood of Istanbul to be a one-of-a-kind cat who was almost like a man. Unlike many other street cats who enjoy being cuddled and petted, Tombili had a reputation for being a recluse. People loved him and said that they appreciated his nonconformist attitude. One resident told Al-Monitor that during a visit to the neighborhood in the summer of 2015, "In a world where so many are competing to cheer and clap a political leader [Erdogan], it is good to see a cat who never gives a damn.” It was this carefree spirit not matching his cuddly appearance that made Tombili world famous.

Indeed, even cats are politicized in Turkey. Several incidents in recent history have been rewritten through cats. For example, during the March 2014 local elections there were abrupt power shortages during the vote-counting process in cities where the ruling Justice and Development Party (AKP) was facing stiff competition. Then-Energy and Natural Resources Minister Taner Yildiz told the media that a cat had caused a short circuit that shut down a power distribution unit. His explanation generated dozens of cat memes on social media where Tombili’s image resurfaced as the leader of the cat mafia planning to attack power stations. Since then, whenever there is something that cannot be explained, the immediate common response has become "Cats must be the culprit."

On Aug. 1, Tombili lost his life battling disease and weight problems. Posters of his photo were hung around the neighborhood on trees, and the caption read, "You will live in our hearts." Some social media users reported that in the last month of his life, a local family took him into their house to care for him but could not save him.

The love for Tombili and mourning for him did not end there. Soon, a petition started on Change.org, which quickly gathered over 17,000 signatures demanding that Kadikoy municipality erect a statue of the late cat. Kadikoy, a secular neighborhood run by the main opposition Republican People’s Party, acceded to the popular request.

Seval Sahin, a sculpture artist, volunteered to make a statue of Tombili for free. The finished statue shows Tombili as he was resting in his world-famous pose by the pavement. The bronze replica honoring Tombili was unveiled on World Animal Day, Oct. 4. The statue rekindled interest in Tombili and further spread the news on social media of his death.

Tombili's transformation from a neighborhood mascot to a national phenomenon was so complete that the news about the statue received coverage in all of Turkey's media outlets.

Cats are loved in Turkey, although the majority live on the streets, where residents help feed them. Cats are seen as clean animals, also helpful in decimating the rodent population in their vicinity. There are several sayings in Turkish about cats and folkloric beliefs that anyone deliberately harming a cat commits a sin that can only be repented for by paying the expense of building a mosque.

With its various breeds and hybrid varieties, Turkey is known as a cat lover’s heaven, so much so that municipalities compete to cater to the street cats. For example, Samsun, an AKP municipality, has built what is called a five-star village for cats. The cat village aims to help sick cats heal and recover.

Tombili has died, but his legacy of nonconformism and his global fame have now been immortalized by a popular initiative. Indeed, it can be said that seeing people from all walks of life finding comfort and joy from the images of a cat has provided the world a sense of hope. Rest in peace, Tombili!