How Muhammad Ali became a hero for Turks 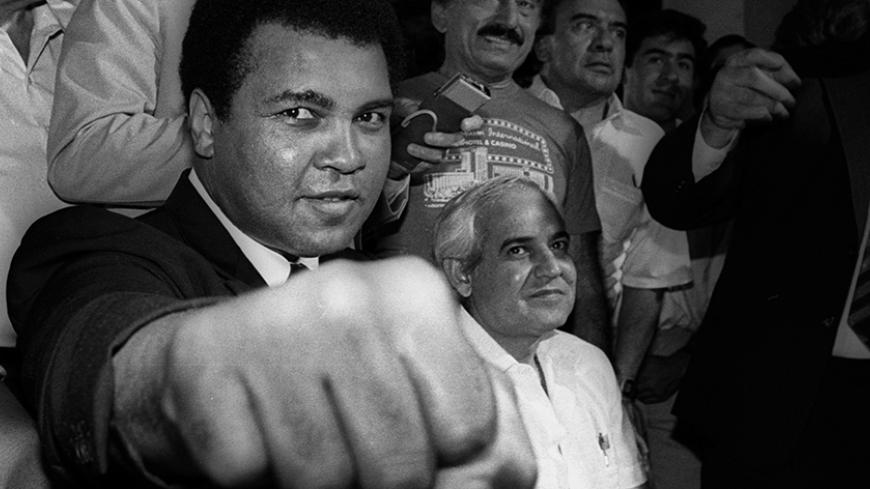 A smiling Muhammad Ali shows his fist to reporters during an impromptu press conference in Mexico City, July 9, 1987. - REUTERS/Jorge Nunez

In 1976, boxing legend Muhammad Ali visited Istanbul. The late Necmettin Erbakan, known as the Father of Turkish Islamism, greeted Ali at the Ataturk airport. Together they attended Friday prayers at the historic Sultan Ahmet Mosque and toured Hagia Sophia with thousands of fans marching along on the streets of Istanbul to catch a glimpse of Ali. Legend has it that Ali that day praised Erbakan, saying, "No white leader ever before embraced me," making Erbakan the first white politician to hug Ali.

An elderly Islamic scholar who asked to remain anonymous told Al-Monitor, “We all grew up watching Muhammad Ali on the black and white screens in the early '70s. Due to the time difference [between Turkey and the United States], we would have to wake up around 3 a.m. In my neighborhood, we were the only family who owned a television. My father did not enjoy sports, let alone boxing, because he was an imam. But he loved Ali. We would invite as many neighbors as we could fit into our living room and raise the television high up on the table. Everyone would pray quietly for Ali. Then before the tea was served, he would knock his opponent down with an amazing TKO. We would all cheer, praise God for this moment of joy. When Erbakan and other Islamists met him, and he hugged Erbakan, I knew we would overcome our hardships. Those were the days when Islamists were the dark black Turks, ostracized and belittled. Muhammad Ali’s punches and his embrace of Islam gave us hope and pride.”

Indeed, Erbakan must have been touched by Ali’s charm so much so that in 1979 he named his only son Muhammad Ali Fatih. On June 3, after battling Parkinson’s disease for decades, Ali passed away in Phoenix, Arizona.

When the news of Ali's death made the headlines in Turkey, there was an interesting ripple effect on social media. Secularists, ultranationalists and of course Islamists in all sections of the media expressed their condolences. Eksisozluk, a popular public information sharing network that already had 28 pages of entries under Ali’s name, added another 35 pages within four days of his death.

Murat Ozer, chairman of the nongovernmental organization Imkander, succinctly summarized it by saying, “The death of Muhammad Ali in the world of Twitter brought together left, right and Islamists — all the sections. That means we share a common value.” Indeed that was precisely the case with hundreds of tweets pouring in from all ideological, religious, ethnic and political divides of the country. Ali, an American boxing icon, became an uncontested hero for the Turks.

Turkish President Recep Tayyip Erdogan provided a heartfelt condolence message on June 4, calling the late boxer “a genuine Muslim.” Erdogan did not miss the opportunity to take a jab at the United States, saying, “Only 50 years ago, the country that aims to establish the world order was labeling people second-class citizens exclusively due to their skin color.” Then Erdogan praised Ali for his struggle against racism in the United States. His speech focused on Ali’s conversion to Islam and resilience as a conscientious objector against the Vietnam War.

One tweet read, “The people who would lynch me had I said 'Kurds did not do anything to me, why would I join the [Turkish] army?' are praising Ali [for his stand against the Vietnam War].”

Another tweet read, “AKP’s spokesperson, Numan Kurtulmus, praised Muhammad Ali for his argument. 'They did not do anything to me' against the Vietnam War. What if someone [from Turkey] refuses to go to war in Nusaybin?”

Despite ridicule of Erdogan’s mendacity, the majority of the Turkish population was united in mourning Ali.

Considering the fact that anti-Americanism has been persistently high in Turkey in the last decade, it is quite impressive for Turks to place an American athlete on a pedestal.

It was impressive to see calls on social media for a funeral prayer in absentia to honor Ali in Turkey. Several Ali interviews, with Turkish subtitles, circulated, and there was almost no news outlet that did not publish a number of famous Ali quotes and unforgettable matches of Ali's, celebrating his life. Details of his funeral and even a biography of Imam Zaid Shakir, who would be leading the jenazah — the Muslim prayer service for death — were published on Thursday in the mainstream Turkish media.

Yet, the tide turned and Ali’s funeral became indeed a strong point of rift after June 6 when Erdogan announced he would attend the funeral and give a eulogy along with former US President Bill Clinton and King Abdullah of Jordan. Critics of Erdogan started questioning what Erdogan would say at the funeral, and in social media people commented, “The man who does not attend the funerals of martyrs in his own country is attending Muhammad Ali’s funeral to get more votes.”

While people were wondering what exactly Erdogan would say, on June 7 the situation became even more complicated. Ali’s family had asked Erdogan and King Abdullah not to deliver speeches. Many foreign news outlets reported the news with a touch of snide, while Turkish media was divided. While those critical of Erdogan emphasized that Ali’s family had asked Erdogan not to speak, pro-AKP media ignored the cancellation and just reported the announcement from the presidential office about Erdogan’s travel plans.

Yet, pro-government media failed to contain the ridicule Erdogan faced about the cancellation of the speech. For example, Brazilian cartoonist Carlos Latuff drew a cartoon where Ali throws a boxing glove from his coffin to an Erdogan figure who is giving a eulogy — the caption reads, “Not in my name, dictator.” In addition, an online petition was initiated asking the Ali family not to let Erdogan speak at the funeral and even not to let him come to Louisville.

Social media users focused on what kind of unique counterattack Erdogan can engage in during the funeral since his name was taken off the speaker list; some fantasized whether or not he would be arrested upon arrival in the United States. Another heated debate that generated several contributions was based on another funeral attendee, rumored to be none other than Fethullah Gulen, an elderly cleric who resides in the United States.

Social media users engaged in bets on who will win if Erdogan and Gulen were to battle, who would have more bodyguards and what the United States would do to handle Erdogan’s rowdy security details.

Unfortunately and unexpectedly, Ali’s funeral has become a mirror of domestic Turkish politics. Ali remains a hero for the different sections of Turkish society for his ability to stand tall against unjust policies of his own government. His personal sacrifices to battle racism, inequality and Islamophobia in his youth have bestowed Ali with rewards later in life. Yet, Erdogan’s attempt to capitalize on his death to reincarnate his image as the leader of the Muslim world has failed.

On the evening of June 8, prior to his US trip, Erdogan gave a speech that resembled a passionate eulogy for the late boxer. Erdogan told the press he was present in 1976 when Erbakan hosted Ali in Istanbul. He added, “Ali was punching for those suffering. He was [symbolically] the punch of the victims.” In 1976, Erdogan and his base were the victims for whom Ali meant hope. Forty years later, it seems Ali delivered a strong punch from the grave against Erdogan’s international credibility.