President Recep Tayyip Erdogan criticizes the United States for racism while pro-government media alleges that the anti-fascist groups in the protests are being supported by outlawed groups in Turkey. 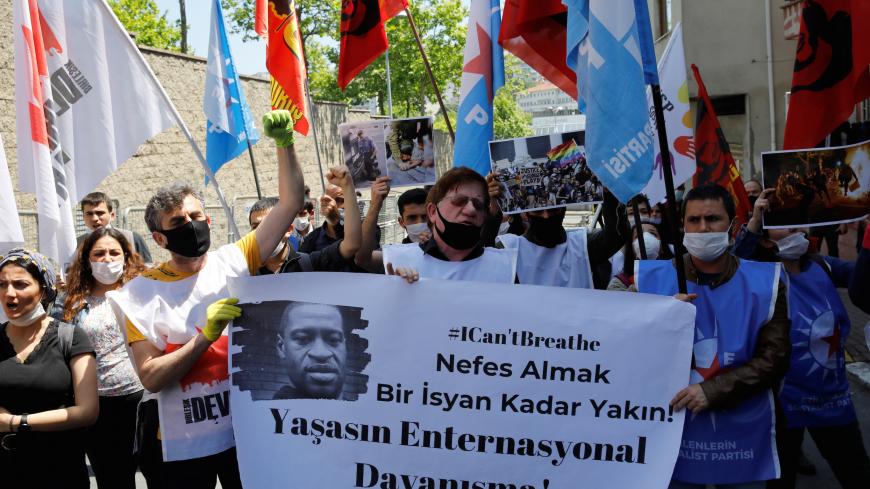 Demonstrators protest the death of African-American George Floyd while he was in Minneapolis police custody, in front of the US Consulate in Istanbul, Turkey, June 4, 2020. - REUTERS/Umit Bektas

George Floyd, a 46-year-old black man who died in police custody on May 25 in Minneapolis, became a household name in Turkey overnight. As protests in the United States took a violent turn, images of police brutality began bombarding Turkish news.

Radical Islamists, ultra-nationalists and left-wing media all had a say about why racism is so prominent in the United States and what needs to be done.

On May 28, Turkish President Recep Tayyip Erdogan posted a series of tweets in English about the “racist and fascist approach that led to the death of George Floyd.” Erdogan sent his condolences to Floyd’s family and made references to hadith (Prophet Mohammed’s recorded words) about how there is no room for racism in Islam.

Over the 10 days that followed, pro-government media oscillated between exaggerated views of “America burning” and criticizing the United States for racism and the lack of press freedom; it made mind-boggling allegations such as the support of the Gulen movement and the Kurdistan Workers Party (the PKK, which is deemed a terrorist organization in the United States and Turkey) for the uprising in the United States.

This is one of the unique moments where an otherwise awfully divided society like Turkey comes together. Why are Turks so eager to criticize the United States while diligently ignoring hate crimes in their own country against Kurds, Alevis, Jews, Christians and LGBT, and police brutality against all possible critical voices?

The way racism is perceived in Turkey may best be reflected in one of the recent news reports from Hurriyet Daily in which reporters surveyed black people in Turkey. The title of the print piece was “Our blacks are happy,” but online it was titled “We asked blacks in Turkey: Do you experience racism?” The answers of African immigrants were summarized as that, in general, they do not experience racism — or they only experience it only from time to time and in small doses. One response read, “Sometimes they [Turks] are afraid of us; that upsets us.” Another one read, “My Syrian friends face problems, but we are fine.”

Kemal Ozkiraz, director of the Eurasia Public Opinion Research Center, told Al-Monitor that based on his observations, “Condescending words toward disadvantaged groups in Turkey are used frequently, so much so that they are normalized and people who engage in this hate speech are usually unaware.” He explained how in the heart of Ankara his apartment management wanted to evict a same-sex couple. Management wanted to gather signatures for eviction simply because they suspected the residents are gay. Ozkiraz said, “The word gypsy is still used as a slang; there are several terms and sayings that are heavily sexist.” A crucial point that Ozkiraz emphasized is that this sort of prejudice is so imbued in the culture that it is normalized.

For example, listening to music in Kurdish or attempting to speak Kurdish in the wrong neighborhood can get one killed in Turkey. The systemic discrimination is internalized. For example, when the Justice and Development Party (AKP) began expelling pro-Kurdish parties' elected officials from parliament or from their mayoral seats, there was no uproar in Turkey. Most Turks were confident these kinds of activities can only be done in the “southeast,'' where the majority of the population is Kurdish and the AKP would not dare touch Turkish officials of the opposition.

The difficulty of government officials to talk about racism can be explained by their Islamist mindset as well. Islam urges the end of discrimination based on skin color. The Turkish Religious Affairs Directorate says Islam is about “global brotherhood,” in which there is no room for racism.

AKP elites become defensive when their racist tendencies and actions are questioned. It is a taboo subject. This Turkish-Islamist fragility explains how little it takes for the dominant male Sunni Turkish elitist culture to melt down when speaking of possible acts of discrimination against Kurds, Alevis, non-Muslims and identities that may be perceived as a challenge. This fragility could be deadly more frequently than government elites would like to acknowledge. The blunt rejection that Muslims cannot be racist blocks any healthy and much-needed public debate about the suffering of the disadvantaged groups.

Eren Keskin, a prominent human rights attorney and vice president of the Turkish Human Rights Association, told Al-Monitor, “After the 1915 Armenian genocide and attacks against Assyrians and other Christians of Anatolia, the new republic was established. The Turkish and Sunni identity was the base of this official new ideology. People were educated to internalize this mindset. Racism became ordinary and legitimized.” Keskin did not mince words when analyzing the Turkish reaction to the uprising in the United States when she said “the most effective explanation is anti-Americanism.”

She also recalled a case quite similar to that of George Floyd. Festus Okey, a black asylum seeker, was brutally murdered at an Istanbul police station in 2007. Keskin said that his murder "generated no public outrage except for a handful of human rights activists no one knew or cared about.”

Several cities around the world held vigils and crowded protests for George Floyd. Although Erdogan and government elites shield themselves behind “no racism in Islam or Turkey” slogans, there were only a few small protests in Istanbul — in front of the US Consulate and Istanbul Trump Towers. A sociology professor who has been studying social movements at a prominent Istanbul university and who spoke to Al-Monitor on the condition of anonymity said, “Erdogan’s men violently lash out against protesters in the United States. How can you expect a protest genuinely against fascism in Turkey?”

It is much easier to criticize the United States for racism and inequality than to question the Turkish government. The sociology professor said that “Islamist fragility makes it impossible even to discuss the existence of racism or other forms of discrimination with Turkish elites. The Erdogan administration is struggling with its own mindset. On the one hand, they are deeply concerned about the growing white supremacist movement in Europe, which fuels Islamophobia and violent attacks on Muslims. On the other hand, the roots of this white supremacy are anti-Semitic. Anti-Semitism is strong in Turkey. It is quite a challenge to battle white power while you are encouraging the supremacy of the Sunni Turkish mindset.”

In today’s Turkey, racism is seen as a foreign concept. Turks are immune to it, and it has become "normal" not to want Syrian, Alevi, Kurdish, Armenian, Greek or gay neighbors. It is kind of you if you can tolerate them. It is encouraged to crack belittling jokes about them — just do not touch the male, Sunni, Turkish core.