Palestinians raised photos of Iyad al-Hallaq, an autistic Palestinian shot by Israeli police, and George Floyd to make a comparison between racism against black people and Palestinians. 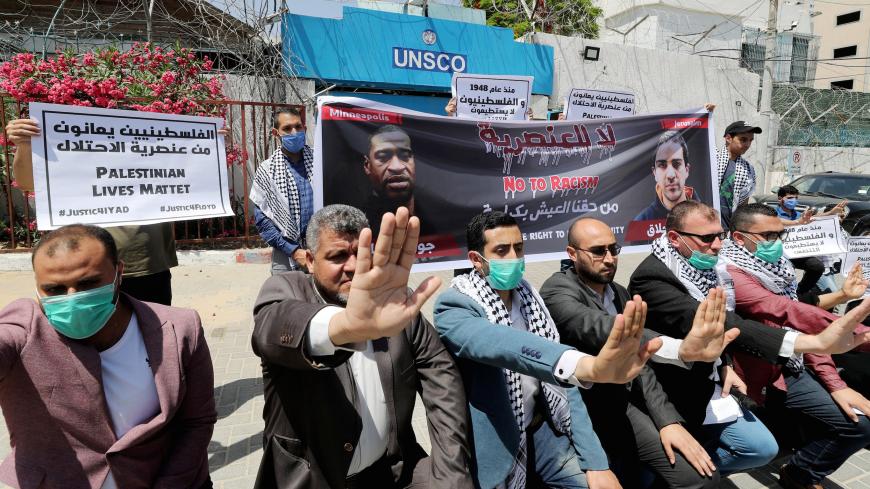 Palestinians gesture as others hold a banner with pictures of George Floyd, who died in Minneapolis police custody, and Iyad al-Halaq, an unarmed autistic Palestinian who was shot dead by Israeli police, during a protest against racial inequality, in Gaza City June 11, 2020. - REUTERS/Mohammed Salem

RAMALLAH, West Bank — When a group of Israeli soldiers tried to arrest Hala Marshood, a young Palestinian woman participating in a peaceful protest against the killing of Iyad al-Hallaq in Jerusalem, she shouted “I can’t breathe” in reference to the last words of George Floyd, whose arrest and murder reverberated in the United States and around the entire world. Floyd, an unarmed black man, died in Minneapolis as a police officer knelt on his neck for 8 minutes and 46 seconds, unleashing demonstrations against racism and police brutality.

Marshood was taking part in a peaceful feminist march on June 9 sponsored by the Tal’at movement (Arabic for "stepping out"), a Palestinian feminist movement. The protests were held in the cities of Ramallah, Rafah and Jerusalem, and in cities inside Israel, including Haifa, Jaffa and Nazareth, against the Israeli racist policies and killings of Palestinians, the latest of which was the shooting of Hallaq, an autistic Palestinian, at the entrance of Al-Aqsa Mosque May 30.

Palestinian women raised the photos of Hallaq and Floyd side by side, shouting slogans against racism and calling for the right to a better life.

Palestinian activists have drawn an analogy between Floyd and Hallaq, as Israeli police were not held accountable for the killing of Hallaq — Floyd's killer and those who were accomplices were eventually arrested, however. Police alleged Hallaq was attempting to stab Israeli soldiers.

Activists presented the case of Hallaq as a clear example of the racist practices against them and the oppression they face only because they are Palestinians, comparing their situation to that of African Americans in the United States, according to Hadil Battrawi, 24, an outspoken Palestinian activist on public and political rights. She holds a master’s degree in public international law from the University of Lander.

“What’s happening in the United States is very similar to the situation in Palestine,” she told Al-Monitor.

“The successive US governments have been working on portraying black people as a burden to society who flout the laws in a bid to condone the racist measures against them. This is the case with Israel that has been painting Palestinians as terrorists worthy only of extermination,” Battrawi said.

“Although we strongly condemn what happened to Floyd, it was an opportunity for us to show the world the reality of things in Palestine,” she added.

Battrawi believes Palestinian activists ought to build on this sweeping movement against racism around the world in light of the decline of the Palestinian political rhetoric on the global arena, in order to re-shift the attention on the Palestinian people’s narrative.

Palestinian institutions, especially those active at the international level, also condemned racist policies against blacks. In a statement on June 1, the Boycott, Divestment, and Sanctions movement called on the International Solidarity Movement in the United States to stand by the Black Lives Matter movement and other black-led organizations in their struggle for justice.

“We, as the indigenous people of Palestine, have first-hand experience with colonialism and apartheid committed by the Israeli regime, which receives unconditional military and financial support from the United States and the successive American administrations,” the statement read.

Amnesty International added fuel to the fire and gave more momentum to the Palestinian activism when it published a report referring to the training of several US police departments with Israel, which was described as “a chronic human rights violator.”

Salah Khawaja, a member of the coordination committee of the Palestinian Grassroots Anti-Apartheid Wall Campaign, concurred with Battrawi’s statements on the need to build on the international condemnation of racist policies and practices, which stemmed from the killing of Floyd.

“There is a similar pattern in the repressive practices whether in the United States or any other country, which could be highlighted in order to stop condoning any practices against humanity and human rights,” Khawaja told Al-Monitor.

He said this is not the first time Palestinian activists get inspired by international events, as they had also identified and sympathized with Mexicans when President Donald Trump spoke of erecting a wall on the borders. This time, however, is more sensitive, with the decline in the attention on the Palestinian cause.

Khawaja said Palestinian official leadership should seize this opportunity via its international arms to rekindle and ramp up support for solidarity movements for Palestinian self-determination and autonomy and the right to justice and to convey the Palestinian message throughout the world.

But are these campaigns and movements enough to advance the Palestinian cause? The answer is no for Mona Shtaya, a human rights activist who believes that Palestinian activists ought to go to the streets in marches and events rather than focusing on social media activism, which would draw more attention and focus to their cause.