The Turkish president fought hard to associate himself with the infamous boxer's image in the last of a long history of such attempts by Turkey, but observers were unmoved by Recep Tayyip Erdogan's fancy footwork. 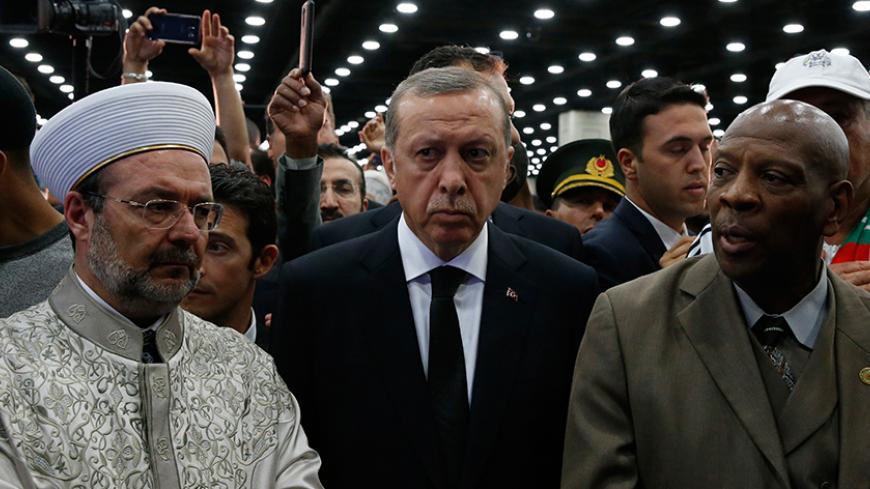 The efforts of Turkey to prove itself capable of leading the Islamic world are frequently knocked down by punishing blows. One of these was struck at Muhammad Ali’s funeral last week.

It all started when President Recep Tayyip Erdogan sought to give a eulogy June 10 at Ali's funeral in Louisville, Ky. His request initially was accepted, but later declined in a strike to Erdogan’s reputation. King Abdullah of Jordan, whose request to deliver a speech was also accepted and then turned down — probably to discourage Erdogan — called off his trip to the United States.

Erdogan, however, did not change his plan, though his request to have Turkish Director of Religious Affairs Mehmet Gormez recite the Quran by Ali’s casket was also declined. Erdogan also brought with him a piece of cloth from the holy Kaaba Mausoleum to place on the casket, but Imam Zaid Shakir, who was leading the prayers, rejected the request, saying it would violate the sanctity of the ceremony.

That wasn’t all. Erdogan was unable to deliver the gifts he had brought for Ali’s family. Erdogan waited for 15 minutes in a room at the Muhammad Ali Center to deliver his gifts before the center's director Donald Lassere stopped Ali's daughter Jamillah by his second wife, saying she could not represent the family in receiving Erdogan’s gifts. The confusion was attributed to Ali's fourth and last wife, Yolanda Williams.

Rumors circulated wildly that Erdogan’s eulogy was canceled because of the Authentic Brands Group, which owns the rights to all licensed Muhammad Ali products. According to daily Hurriyet’s Washington correspondent Tolga Tanis, the company did not want Ali’s Muslim identity to dominate the funeral and made it clear it did not consider Erdogan a world leader, but a Turkish leader with a problematic image. As a result, Erdogan apparently did not appear in a single photo with anyone from Ali’s family.

There was a scuffle between Erdogan’s bodyguards and local security personnel, now a tradition of Erdogan’s foreign travels. After all these developments, Erdogan decided to cut his visit short and returned to Turkey.

In Rabbi Michael Lerner’s speech at Louisville's arena, he called on Turkey’s leaders to stop killing Kurds and on Israeli Prime Minister Benjamin Netanyahu to end the occupation of the West Bank. The pro-government Turkish media branded the rabbi’s choice of words about Erdogan "impertinence."

Unusually for him, Erdogan preferred to keep quiet about what led him to cut his trip short, saying only, "Our first reason for coming here was to perform our religious duty." He said it wasn't clear what subsequent ceremonies would involve, and "that is why we decided not to stay any longer.”

Erdogan had thought Ali’s funeral was an attractive opportunity to deliver his messages. Instead, Erdogan became Ali's last knockout.

There is no question that Ali was an athlete whose exciting bouts had kept Turks up late many nights. Many officials, including Erdogan, recalled how they had spent long nights in front of their TVs to watch Ali’s matches. Erdogan said, "We used to watch at 4 o’clock in the morning. His punches knocked out the oppressors. He was the fist of the deprived.”

That Ali’s strongest opponents were sometimes themselves "deprived blacks" did not matter because Ali was a Muslim and had declared war against racism.

The political Islam movement that Erdogan belongs to made use of Ali's fame 40 years ago. On Oct. 1, 1976, when Ali was at the zenith of his career, he became an instrument of Turkish politics. According to newspaper reports, Ali was invited to Istanbul by the deputy prime minister, National Salvation Party leader Necmettin Erbakan. Political posters announced Ali’s coming. People poured into Sultanahmet Square in Istanbul. Erbakan received Ali at the airport and prayed with him at Sultanahmet Mosque. The famous boxer’s first meeting with the people of Istanbul turned into a political rally.

It was later understood that Ali was invited to Turkey not by Erbakan’s party but by the Culture Ministry's Deputy Undersecretary Kemal Baytas.

Baytas was introduced to Ali by Adil Ozkaptan, who was cooperating with Saudi weapons trader Adnan Khashoggi and working as a producer in Hollywood. The visit was not organized by the National Salvation Party, but by the Ministry of Tourism. Erbakan, who was a partner of the coalition government, seized the opportunity and turned it to a political affair. The trip lasted 24 hours.

There are many others who have tried to grab a snippet of glory from Ali’s life. Nevzat Yalcintas, a former Justice and Development Party deputy, claims he is the one who taught Ali how to pray like a Muslim. Ali, then known as Cassius Clay, went to London in 1963 to fight Henry Cooper. According to Yalcintas, Ali visited the London Islamic Center and announced he had decided to become a Muslim. Yalcintas then taught him how to pray, according to the story. While Ali did not formally announce his conversion to Islam until 1964, he had been attending Nation of Islam meetings for some time.

Yalcintas was indeed instrumental in Ali’s second trip to Istanbul in 1993, when he came for the opening of TGRT-TV. That was the last time Turkish leaders crossed paths with Ali, who was by then suffering from Parkinson's disease.

Erdogan never misses a platform to make his case, and his wish to speak at the funeral was seen as exploitative. Erdogan's associates declared him the true heir of Ali's efforts to champion the cause of the oppressed.

Nuh Albayrak, the Star editor-in-chief who accompanied Erdogan on the Louisville trip, said, “Muhammad Ali changed many things in the United States. Now Erdogan, who has taken up Ali's mantle, will be joined by millions of the oppressed to reject the exploitation they are subjected to.”

Ali had refused to fight in the Vietnam War, something Turkey’s dominant political and social culture cannot identify with. Opposing war is very costly in Turkey. Erdogan is a part of the culture that considers avoiding war treasonous. Remember, Erdogan made life miserable for scores of academics for signing a communique calling for peace.

Ali might have readily endorsed Lerner's sermon instead, a message well-received by peace-loving people. This is the reality, but those who try to promote Erdogan as Ali’s successor cannot see it.