Turkish Prime Minister Recep Tayyip Erdogan's pressure on the Central Bank governor to lower the interest rate is a mix of populism and ideology. 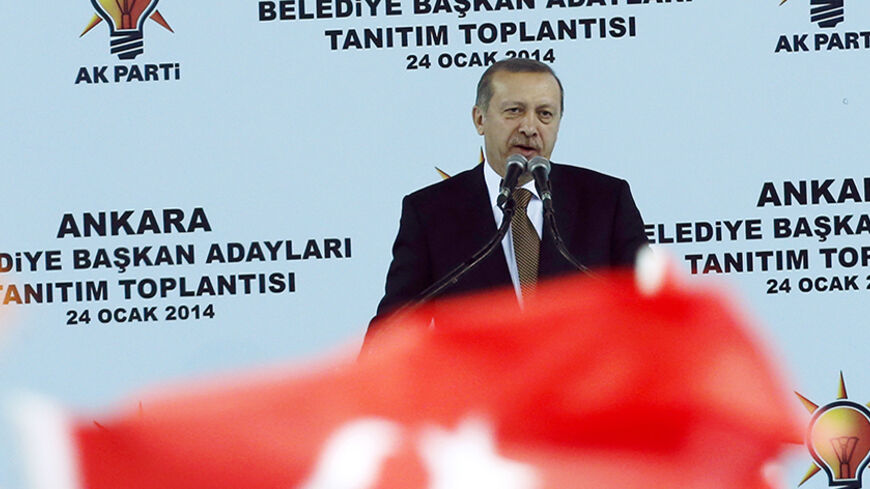 The frequent calls to “lower the interest rate” by Erdogan in his usual abrasive manner, in a language tantamount to scolding, are threatening the presumed independence of the Central Bank and denting the international prestige of the institution.

Of course, a higher cost will be the fortified impression that Turkey is on the verge of becoming a “command economy” amid the heavy pressure the Central Bank is under.

It is not a coincidence this offensive against the Central Bank was begun immediately after the March 30 local elections.

High tension between Erdogan’s Justice and Development Party (AKP) and the Gulen movement had turned to an all-out war as a result of the anti-graft operations of Dec. 17 and Dec. 25. The ensuing crisis caused sharp increases in the dollar-euro parity. The Central Bank decided to increase on Jan. 29 its weekly repo rates by 5.5 points to 10% to balance this parity.

Erdogan lost fewer votes than expected in the local elections, despite his family and his party facing serious corruption accusations. In addition, the two crucially important urban centers of Ankara and Istanbul retained their AKP mayors.

Unless a major surprise occurs, Erdogan will run in the August presidential elections as the AKP candidate. In 2015, the general elections will take place, and a persistent low growth rate could well lead to the loss of votes for the government.

We must also note that the construction sector is most affected by interest rate hikes, which includes capital groups that substantially support the government.

The Central Bank's Monetary Market Council did not meet Erdogan’s expectations of a sharp reduction in interest rates at its meeting on May 22, and lowered the weekly repo interest rate only by half a point from 10% to 9.5%.

Erdogan’s reaction to Basci was harsh. In his address to the AKP parliamentary group on May 27, he said, "So what? What independence? … Don’t make fun of people [by lowering the interest rate by] half a point. This interest rate is too high. This has to go down so that real investments will increase. We are politicians. We are accountable to people.”

He continued, “It's enough. I have to say this. … The interest rate is the cause, inflation is the effect.”

According to Erdogan’s thesis, which points to inflation as an effect of interest, if the interest rate is lowered, inflation will follow.

The Turkish Statistical Agency revised its annual inflation rate at 9.38% for April. Inflation is on the rise. With his interest rate-inflation theory, Erdogan can easily point to Basci as the culprit of climbing inflation, because he did not sufficiently lower the interest rate.

Erdogan’s theory has led to a media debate. Economists and economy writers said Erdogan’s thinking was erroneous, and that exactly the opposite is true: Inflation is the cause, and the interest rate is the effect.

Erdogan's astounding views on interest rates emanate from his peculiar populism, which Islamism blended with populism. Although he is a religious person, Erdogan knows well that because of country and global realities he cannot categorically ban interest payments. But knowing that he has to soothe the sentiments of his religious base, he focuses on the interest rate in his reactions; for instance, with the concept of the “interest rate lobby.”

When Erdogan’s image in the world changed negatively because of his irrational and harsh reaction to the Gezi Park movement, the positive global perceptions about him over the first years of his rule were also shattered. The world is watching Erdogan much more closely. Highly problematic, confounding concepts such as the “interest rate lobby,” which did not really distract from positive perceptions at the beginning and were not generally questioned, are now inflicting serious damage to Erdogan’s image.

The late Necmettin Erbakan, the founder and historical leader of the Islamist National View movement that also gave birth to Erdogan’s rise to prominence, was also a strong anti-interest rate politician. In Erbakan’s narrative, “pro-interest rate capitalism under the control of Zionists was exploiting humanity and Turkey."

Erdogan does not speak like his master Erbakan. Erdogan has startling targets such as the "zero interest rate” that cannot be explained with the operational logic of the banking system.

In a meeting with businessmen on April 29, 2011, he said he sees interest rates as oppression. “We are not the oppressor. We are a government confronting oppression,” he said, adding that their target was to reduce the interest rate to zero.

“What is the target? The target, God willing, is to bring down the interest rate and inflation to the same level. We will do it. To achieve a zero interest, we must do it," he said.

His words had attracted attention in earlier years — for instance, at the 2006 D-8 Summit in Bali of eight Muslim countries: "We should not limit ourselves to the issue of Islamic interest. We have to play according to international rules. Let’s look at the characteristics of interest rates.”

In the reactions that followed, the sentiment was that Erdogan had meant to say that what is haram is not the interest rate at the same level as the inflation rate, but an interest rate above the rate of inflation.

In sum, it is not only the election calculations behind Erdogan’s “lower interest rate” pressure on the Central Bank, but also his ideology and a “moderate anti-interest rate stand” based on this worldview.