First loved and then massacred during the days of the Ottoman Empire, stray dogs in modern Turkey still can't find much peace. 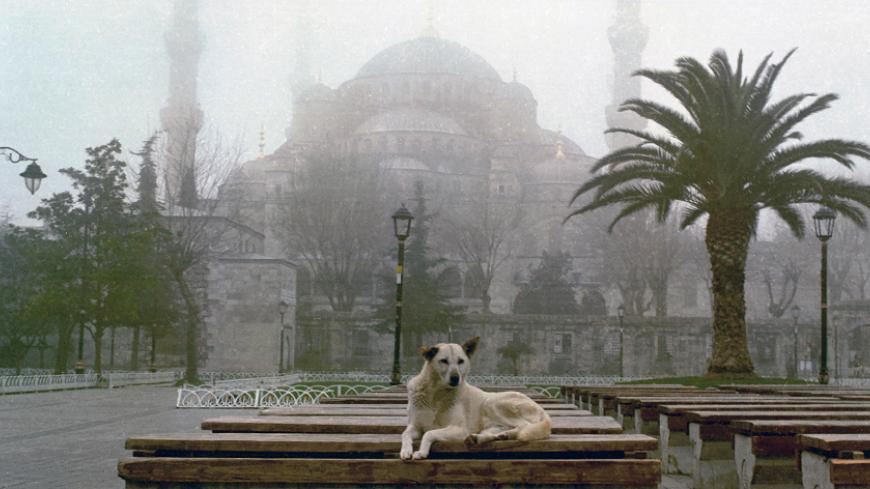 "Angelus Novus" is one of the works on display in the "Four-Legged Municipality" exhibition in Istanbul. - (Sinan Cansel/Istanbul Research Institute)

Sultan Mahmud II is known for one of the most ferocious anti-military acts in all of Turkish history. On June 15, 1826, he abolished the Janissaries, the Ottoman Empire’s omnipotent military forces with a long record of revolts against sultans they did not like. In one bold move, some 6,000 Janissaries were killed by new troops loyal to Mahmud, and the rest were exiled. When Mahmud exiled the dogs in Istanbul to one of the Prince Islands, however, the residents of the Ottoman capital rose up in a rare act of civil disobedience, forcing the sultan to bring the dogs back home.

Today, Istanbul is known as a cat city. This image was reinforced earlier this year with the installment of a statue memorializing Tombili, the town cat and feline symbol of the city, in his customary state of repose, as did the documentary “Kedi” (Turkish for “cat”). This summer, however, the dogs struck back with “The Four-Legged Municipality,” an exhibition at the Istanbul Research Institute.

“Images and writings from the 19th century show us that dogs were a very strong presence in the daily life of Istanbul,” Gulru Tanman, project manager for the exhibition, told Al-Monitor. “We have been preparing for this exhibition for one whole year, for which we supplemented the considerable documents and images in the Suna and Inan Kirac Foundation with Pierre de Gigord’s archives.” De Gigord, a French businessman, assembled an impressive collection of photographs taken during the Ottoman era.

The 136-piece exhibition features photographs, travel journals, postcards, magazines, engravings and other media from the 19th and early 20th centuries that shed light on street dogs in Istanbul. Their presence in the daily lives of Istanbul residents was such that Cornucopia magazine headlined news of the exhibition “Citizen Canine.”

Islam forbade practicing Muslims from keeping dogs as household pets in the konaks, the large houses with courtyards in the Ottoman Empire, but a canine's presence on the streets was acceptable and even welcomed. In the eyes of European travelers, Istanbul streets were no different from a zoo. In “Journey from Paris to Jerusalem,” the French writer Francois-Rene de Chateaubriand wrote that the city had three basic features: deserted streets, an absence of wheeled carts and a sizeable dog population.

Dogs sometimes featured in Ottoman literature, in particular in satirical writing. Nef’i, one of the greatest classical Ottoman poets of the 16th century, wrote the following, which every Turkish pupil knows, about the sultan’s visier (minister), Tahir, whose name means “clean” in Arabic:

Mr. Clean called me a dog

His compliment is so kind;

As I am of the Maliki sect;

The stray dogs' reign came to an end during the second half of the 19th century with moves toward Westernization. European-educated intellectuals were determined to transform Istanbul's “oriental” mystique into Western urbanism. “The Ottoman ruling class of the reform period, who had had firsthand experience of Europe, saw the street dogs as a sign of Orientalism and a symbol of poverty,” Tanman said. "Consequently, they tried hard to eradicate their presence.”

In the exhibition, an 1845 engraving by James Virtue shows a scrivener writing a letter for two illiterate women as a dog peacefully sleeps under his feet, suggesting the intimate relationship between man and beast. On the other hand, however, are disturbing drawings and pictures of equipment used to catch or kill dogs, among them a rod with a noose-like end and devices for gassing or electrocuting them. The exhibition also has photographs of the dogs put on a boat for one of the Prince Islands, in the Sea of Marmara, and several photos and drawings of them on the barren territory.

At the beginning of the 20th century, rumors about the dogs began circulating in Istanbul, the city of seven hills and 7,000 gossips. According to Jason Goodwin's 2003 book “Lords of the Horizons,” rumor had it that the palace, whose vaults were now empty, had reached an agreement with a French company that wanted to use the dogs’ skin to make gloves. At the time, others proffered that dogs were sacred, because they had entered Istanbul alongside the armies of Mehmet the Conqueror in 1453, and that their ban from the city would trigger the end of the Ottoman Empire.

The iron-fisted mayor of Istanbul, Suphi Pasha, cracked down on dogs in 1910, sending 80,000 of them to the Prince Island of Sivriada, this time never to return. For days and weeks, howls from the island and the smell of dead dogs killed by others for food wafted to Istanbul, keeping the city’s residents awake. The situation led them to nickname the island Hayirsizada, literally “scapegrace island” in Turkish. Every year, a group of animal rights activists visits the island to commemorate the episode known as the Istanbul Dog Massacre.

Today’s Turkey, despite paying lip service to animal rights, is hardly better, Ahmet Kemal Senpolat, author of “Animal Rights in 99 Questions” and chairman of Haytap, Turkey’s first animal rights federation, told Al-Monitor, “Just like the exile to Hayirsizada, the municipalities today collect dogs and other stray animals to take them either to shelters, which are few and primitive, or to the peripheral neighborhoods of Istanbul,” he said. “Some of them are taken to Silivri, Catalca or Zekeriyakoy. Some are simply left near the autoroute around Istanbul, and we read about them in traffic statistics under domestic animals [killed] by a car or truck.” Last year, 400 dogs were killed or injured in traffic accidents in Istanbul.

“We think there are 200,000 stray dogs and cats in Istanbul alone,” Senpolat said. “Some of them are animals who have been bought in a pet shop or even an expensive St. Bernard or some other rare species smuggled into Turkey on someone’s short-lived whim.” Haytap, like other animal rights groups, wants pet shops to stop selling animals.

Tanman told Al-Monitor, “One of the reasons for our project was to cast light on today’s animal rights by looking at the past and creating [more] awareness of animal rights today. We have received very positive reactions from animal rights groups, and we started a campaign with the hashtag 'comewithyourdog' so people can visit the exhibition with their pets.”

The government maintains that despite what critics say, upcoming new regulations will advance animal rights in the country. “Necessary legal procedures will be carried out against those who kill or torture animals. There is a fine for that now. When the new regulations are introduced, it will be punishable with a prison sentence,” Forestry and Water Minister Veysel Eroglu told Hurriyet June 23, adding that the law will make it impossible for pet shops to sell anything other than “fish and some bird species.”

In a dog’s life, there is sometimes a chance for the perfect moment between man and his best friend. In Turkey, it happened on June 21, when a stray dog walked into the ancient theater of Ephesus while the Vienna Chamber Orchestra played Mendelssohn and laid next to the feet of the first violinist. “Cutest moment in classical music,” Turkish classical pianist Fazil Say, a thoughtful and hard-to-please artist, tweeted.