Why are Turkey’s dogs committing suicide?

The problem of abandoned dogs in Turkey has worsened in recent years, and animal rights groups are standing up to promote anti-abuse legislation. 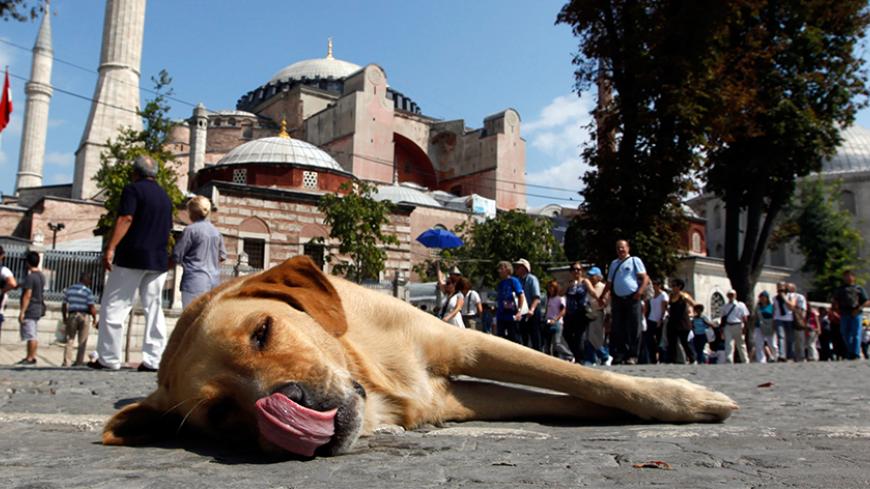 A stray dog lies outside the Hagia Sophia in Istanbul, Sept. 17, 2010. - REUTERS/Murad Sezer

Turkey’s problem of dog abandonment first emerged in coastal summer home communities, with people casting off dogs before heading back to cities at the end of the season. The phenomenon has now spilled over to urban areas as a result mostly of impulse purchases from pet shops — often to reward children for good grades or as presents for Valentine’s Day and wedding anniversaries — with little thought about the animals’ long-term care. The dogs — most of them purebred and trained — are either left in animal shelters or simply thrown out in Turkey's streets, which are already home to a large population of stray dogs and cats.

Distraught and depressed, abandoned dogs often starve to death as they wait in vain for their owners to come take them back. In one extreme incident in 2012, a dog abandoned in a fourth-story apartment in the city of Bursa jumped from the balcony in what the media described as a “suicide.” Defne Esra Yazicioglu, chairwoman of Turkey's Animal Lovers Society, says many dogs left in animal shelters “stop eating and drinking water, effectively committing suicide, once they lose hope and feel unwanted. In some cases, we have failed to save dogs even after putting them on an intravenous drip.”

The problem has become so prevalent that local activists have joined hands with foreign peers to send Turkish dogs for adoption abroad, so far flying 145 golden retrievers to the United States.

The Animal Life Rights Confederation recently paid for a television ad to raise public awareness of the plight of abandoned pets and encourage adoption. The ad — titled “Adopt from shelters, give them a life” and shot with the support of Turkish celebrities — features a dog named Boza. The dog is first shown seated at a dinner table with its family, who give it a birthday cake with candles. The next moment Boza is seen lonely and disheveled in the streets before ending up in a shelter, awaiting rescue with other abandoned pets. “We hope the clip will raise awareness on the adoption of cats and dogs struggling to survive in shelters and contribute, even if a bit, to forestalling [the notion of] buying love with money,” said the confederation in a statement.

In Istanbul alone, about 400 street dogs are either killed or injured in traffic accidents each year. Ahmet Kemal Senpolat, the head of the Animal Rights Federation, gave Al-Monitor the figure from the road authorities, saying, “Without a backward glance, people drop long-time pets in the street or in shelters. The dogs always expect their owners to return, but after a while they lose hope. Dog suicides are very frequent in animal shelters.”

Popular Turkish columnist Bekir Coskun — an ardent animal lover who has dedicated a best-selling book, “Letters to Pako,” to his dog and shot a TV series with the same name — explained that abandoned dogs kill themselves unwittingly. “They are so devoted to their owners that they expect them to come back. Out of distress, they stop eating and drinking water, and their immune systems collapse. They commit suicide without knowing it,” he told Al-Monitor.

The good news is that Turkey’s animal rights movement has grown stronger and more vocal in recent years. The government’s intention to rewrite the constitution has prompted a drive to enshrine animal rights in the new charter, in addition to efforts to amend existing legislation.

The current law on the protection of animals, enacted in 2004, stipulates only symbolic fines for those who violate provisions on the mistreatment of animals. For a truly deterrent effect, the law needs to have tougher sanctions and provide clearer guidelines for the police and the judiciary.

According to Senpolat, the courts should take an “efficient and decisive” lead on the issue. “There is already a draft on animal rights for the new constitution. This, however, should not be something vague like ‘Turkey is a democratic state based on the rule of law that respects the environment.’ The constitutional provisions should be applicable,” he told Al-Monitor. “Yet to stamp out violence against animals and increase awareness, the Law on the Protection of Animals is the one that truly needs to be amended. We have been struggling for this for a whole decade now. People who abuse animals should be sent to therapy and face charges carrying prison sentences. That’s how the civilized world deals with it. There is no reason why we can’t do the same.”

The activists, Senpolat noted, have taken their campaign to the highest echelons of the state. “We’ve explained to the president what we demand. We’ve met separately with all four parties in parliament. They have promised joint action to legislate a new law,” he said. “Earlier drafts became void due to the government change [after the 2015 elections], but the incumbent government insists it will stand behind the changes.”

In remarks to Anatolia news agency earlier this year, Selcuk Ozdag, deputy chairman of the ruling Justice and Development Party, pledged that the law on the protection of animals would be amended this year in line with the example of European countries.

Meanwhile, a political party is expected to soon formally promote the animal rights movement. Activist Metin Kilic has stated the Freedom for Animals Party will focus not only on pets like cats and dogs, but all animals. In a newspaper interview earlier this month, Kilic grumbled that most pro-animal associations ignored the issue of sacrificial slaughter in Islam, wary of antagonizing religious conservatives. “They love cats and dogs but keep silent on the slaughter of other animals,” he said. “We will be the volunteer advocates of all voiceless animals.”

Coskun is optimistic the party will generate strong popular support. “When I started writing my columns about Pako, I realized what a great potential Turkey has in terms of animal lovers. There is a pet in almost one in every two homes,” he said. “In coastal regions and big cities, people have come to react furiously if someone mistreats an animal. When I lived on [the Aegean island of] Cunda, a guy was almost lynched for kicking a street cat.”