Are Ankara, Washington on collision course in Syria?

The tension between Turkey and the United States is threatening to sharply escalate with any missteps in the dance between Turkey's anti-Kurdish objectives and Washington's support for Syrian Kurdish groups. 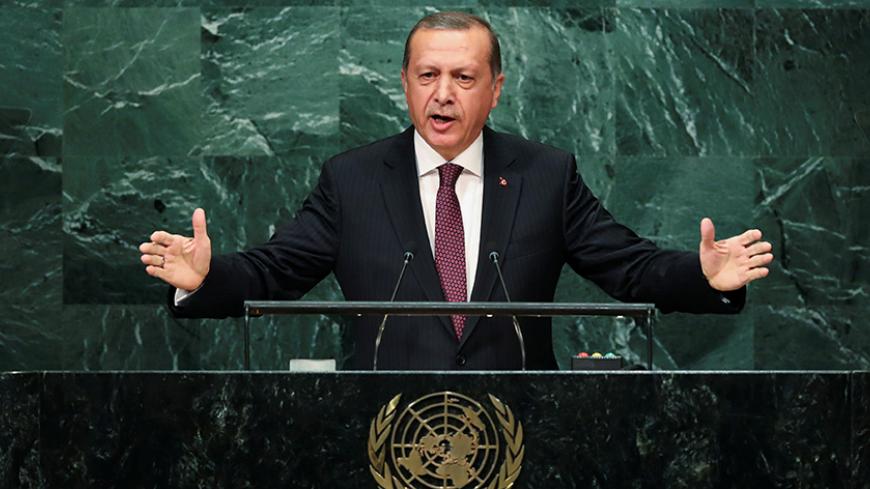 Turkish President Tayyip Erdogan's supporters were awed once again by his performance at the UN General Assembly meeting in New York. He spoke at the summit about Syrian refugees and touched upon nearly every issue on in his agenda, as if he was addressing an admiring domestic audience in Turkey.

While he was delivering his speech, his fans flooded social media with claims that he taught the world a lesson. The following day, pro-government media outlets hailed his speech with glowing headlines like “Turkish Day at the UN,” “The World is Bigger than Five” and “Erdogan was very outspoken, lashed out at the whole world.”

“The world is bigger than five” is Erdogan’s favorite motto, a challenge to the five permanent members of the UN Security Council that hold veto power. Erdogan once again chose the UN rostrum to voice his resentment of the injustices of the international system. When he picked up the microphone at the General Assembly meeting, he did not mince his words nor try to be diplomatic. He was as blunt and populist as in his domestic political performances.

In this respect, Erdogan increasingly resembles the fiery third world leaders of the Cold War period and perhaps more than anyone else former Libyan leader Moammar Gadhafi.

Yet, it seems the overall international climate is not very interested in the parade of colorful orators at the rostrum of the United Nations. The pro-Erdogan reporters said nothing of the seats in the General Assembly hall. Erdogan gave his fiery speech in front of mostly empty seats. The world's leaders had not turned out to hear his lesson.

No worries. The Turkish president was not deterred. He was as vibrant as ever, as if speaking in front of the tens of thousands of people he is used to. The substance of his speech was consistent with a message he had already directed to the US administration on his way to New York.

At Ataturk Airport in Istanbul, just before his flight, Erdogan held a press conference and gave detailed information about Turkey’s military operation in Syria. He said with Operation Euphrates Shield, an area covering 900 square kilometers (560 square miles) has been cleansed of “elements of terror.” He emphasized that the line held by the Turkish armed forces is moving south.

Interestingly, Erdogan mentioned that 5,000 square kilometers (3,100 square miles) of the area under Turkish military control could be considered a “safe zone” where Syrian refugees could be resettled. He also reminded his audience that at the outset of the Syrian crisis, Turkey had defined three goals:

The Turkish military incursion that began on Aug. 24 with clearing the border town of Jarablus from the Islamic State (IS) and handing it over to Turkey-supported Syrian opposition groups created a de facto “safe zone” of the kind Erdogan has been proposing since the end of the year 2011.

In Erdogan’s view, the creation of a “safe zone” in northern Syria, especially the northwestern tip west of the Euphrates, would not only weaken the hold of the regime in Damascus and provide an area for the refugees, but would also prevent the formation of a Kurdish corridor along Turkey’s southern border.

Thus, the safe zone was meant to contain Washington's Syrian Kurdish allies, the Democratic Union Party (PYD) and the People's Protection Units (YPG) more than anything else.

In his press conference on the way to New York, Erdogan was explicit on the issue. In a veiled criticism of the US administration, he said, “Tell Abyad is an Arab settlement. What is the point of taking it from the hands of [IS] and handing it over the PYD and YPG? What was the objective in doing this? Linking with Afrin so they could reach the Mediterranean?" He was speaking of the Kurdish objective of linking the three cantons of Qamishli, Kobani and Afrin to form an area stretching from Syria's borders with Turkey and Iraq on the east to the Syrian-Turkish border in the west. "After the Gaziantep bombing we’ve said ‘enough is enough’ and we told them this was a mistake. During the Manbij operation, we declared that the PYD should not be in Manbij. Manbij is Arab. [The United States and the coalition partners] acted as if Manbij belonged to PYD. We’ve told them they are doing wrong,” he said.

Erdogan, apparently alluding to Washington, added, “They tell us not to move further. We will. We will move to wherever we need to move. We have to remove the threat against us from all those areas. We had negotiated this matter earlier. We had stated that we have to create a safe zone of 90-95 kilometers wide and 40-45 kilometers deep. We had spoken with President [Barack] Obama on this issue at the G-20 summit in Antalya, and he had accepted it. We had also discussed this with Putin.”

To be fair, Erdogan, even though he is at odds with Washington, is consistent in his Syria policy. He has been advocating for the creation of a safe zone in northern Syria for over five years. Neither is his anti-Kurdish stance in northern Syria new. Even while the so-called “peace process” with the Kurdistan Workers Party was ostensibly underway in Turkey, he was dedicated to obstructing Kurdish autonomy all along the Turkey-Syria border.

On Jan. 26, 2015, while on his way back from an official visit to Somalia, he had spoken to journalists accompanying him in unequivocal terms:

“I told Obama three things must be settled. One, no-fly zone. Two, safe zone. Three, train and equip. The US accepts the last one, but does not agree with the first two. And it does not acept regime change. It is not its target. But without that, there cannot be any resolution in Syria. What happens in its stead? Exactly what has happened in Iraq would repeat in Syria. We do not want it. What do I mean? Northern Iraq. Now, the birth of Northern Syria! It is impossible for us to accept it. I am aware how heavy the burden on Turkey is in regard to this. But we have to be resilient. Otherwise, following Northern Iraq, a Northern Syria could come into being. Such entities would create great troubles in the future.”

Many seem to have forgotten this statement by Erdogan, but he has remained committed to it, and that approach has guided all his actions regarding Syria since then.

As long as he feels strengthened in the wake of the failed coup and the Turkish incursion into Syria, the Turkish president naturally will be adamant in pursuing his Syria policy. And as long as Washington does not extradite Fethullah Gulen, Erdogan's public enemy number one, and if the Obama administration does not step back from arming Syrian Kurds — even against IS — tensions may sharply escalate between Turkey and the United States and jeopardize the future of bilateral relations between the two countries.