Will Erdogan's plans for northern Syria be realized?

Turkey's President Recep Tayyip Erdogan may keep everyone guessing about his next move in Syria, but it is not certain if he has clear plans himself. 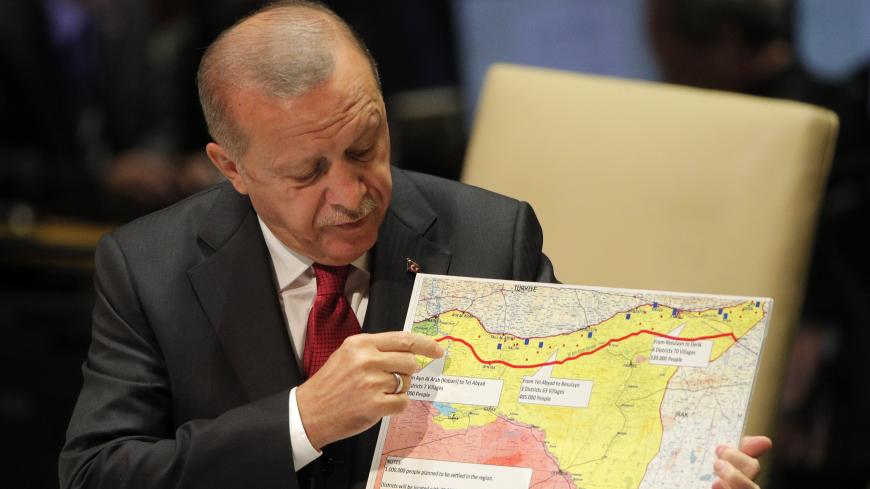 Turkey's President Recep Tayyip Erdogan holds up a map as he addresses the 74th session of the UN General Assembly at UN headquarters in New York City, New York, US, Sept. 24, 2019. - REUTERS/Brendan Mcdermid

President Recep Tayyip Erdogan’s failure to meet Donald Trump during the United Nations General Assembly raises the question of whether Ankara will order the Turkish army into northeastern Syria.

Erdogan indicated in late August that Ankara would launch an operation by the end of September to establish the “safe zone” it wants east of the Euphrates River if it can’t agree with Washington on the details of this zone.

Turkey and the United States agreed in principle in early August on the need for a security zone in northeastern Syria but remain far apart on specifics.

The region where Ankara wants to set up the zone is currently controlled by the US-backed Kurdish People's Protection Units (YPG). Ankara argues that it needs control of this zone to secure its borders against the YPG, which it says is a terrorist organization that threatens Turkey.

Ankara is now emphasizing that it needs this zone along Turkey’s border with Syria to settle a large portion of the estimated 3.6 million Syrian refugees in Turkey.

Erdogan hoped to sway Trump in New York with regard to Turkey’s demands. He was clearly emboldened by his recent success in gaining Trump’s sympathy over the question of Turkey’s purchase of Russian-made S-400 air defense systems.

This time, though, Trump disappointed Erdogan.

Two points remain outstanding in the negotiations between Turkish and US military officials regarding the safe zone.

Erdogan produced a map during his UN General Assembly address last week that showed that Ankara wants a “safe zone” that runs 480 kilometers (some 300 miles) along the Turkish border and cuts 30 kilometers (18 miles) deep into Syrian territory.

Ankara is also demanding full control over this region.

Erdogan stressed this point in late August, in an address to cadets graduating from the National Defense University. He said Turkey would not accept any arrangement that did not give Turkish forces full control over this zone.

Apart from initiating limited joint patrols with Turkey along the Turkish-Syrian border, Washington has not accepted either of these demands.

Erdogan also underlined this point in his National Defense University address. “We see a wide gap between what we are saying [about the safe zone] and what the US is saying about it,” he said.

He further referred to the meeting he planned to have with Trump in New York. “The meetings we will have in three weeks' time in the United States will be a last chance. … If our soldiers are not in control over the area within a few weeks then we will put our own action plan into motion,” Erdogan warned.

That was a month ago. Erdogan’s failure to meet Trump in New York — except for a photo-op during the dinner hosted by Trump — has left him in a difficult position, given the hopes he had invested in this meeting.

The deadline Erdogan gave for ordering the Turkish army into northeastern Syria has also passed. Nevertheless, he continues to hammer the point that this operation is around the corner. He repeated this during his address at the opening of parliament Oct. 1.

Minister of Defense Hulusi Akar, for his part, said this week that the Turkish army is ready to move as soon as it receives Erdogan’s orders.

In an article for the T24 news portal, Yilmaz wrote that the first choice is “to keep the promises he made prior to leaving [for the US] and press the button for a safe zone to be set up east of the Euphrates.”

Yilmaz said this choice had to also factor in the possibility of clashes with American soldiers.

Erdogan’s second choice, Yilmaz argued, is “to continue to make heroic speeches at home, while relying on Russia, and to pray that the US abandons its plans to establish an autonomous Kurdish region in northern Syria.”

Based on past experience, Yilmaz believes Erdogan will opt for the second choice.

Fehmi Koru, another veteran political commentator, had his own take on Erdogan’s failure to meet Trump.

“If the two countries are on a collision course, and if the US has prepared itself for this, then those in Washington who desire this collision may not have wanted this meeting to take place,” Koru wrote on his blog.

Koru believes that for all its bluster, the Turkish side may refrain from any intervention in the region, and ultimately have no choice but to accept a US fait accompli east of the Euphrates.

A Western diplomat, however, pointed out that Erdogan continues to insist that this operation will go ahead.

“Erdogan has enough support from nationalist quarters at home and could defy the odds and order this operation,” the diplomat, who spoke anonymously because of his sensitive position, told Al-Monitor.

“If he succeeds, this will not only boost his standing at home immeasurably, but also gain him the political clout he wants but currently lacks in Syria,” the diplomat added.

Most analysts agree that if Ankara realizes its aims east of the Euphrates this will establish a solid buffer between Turkey and what appears to be a nascent Kurdish entity emerging in northern Syria under US tutelage.

Turkey, however, can only police this large territory with a vast military presence. The view among many analysts is that the other stakeholders in Syria are unlikely to accept this.

Retired Turkish Ambassador Oguz Demiralp believes that Ankara’s ultimate plan is to settle a large Arab population between the Kurds in Turkey and the Syrian Kurds.

“The aim is to divide the Kurds and settle a Syrian Arab population in the region that feels an affinity for us because of the Sunni link, and thus [make Turkey] an effective force in Syria,” Demiralp wrote for T24.

Demiralp does not think the international community will accept this. Demiralp also believes that it will not be possible to justify a large-scale Turkish operation east of the Euphrates under international law.

Ankara is already facing accusations of trying to alter the demography of northeastern Syria to the disadvantage of the Kurds and the advantage of Sunni Arabs who serve Turkey’s interests.

There is also the fact that Turkey’s settling Syrian refugees in this region will require the displacement of those already there. In addition to this, it is not clear if the Syrians to be sent back will accept being resettled in these regions.

Demiralp pointed out that trying to settle or resettle refugees against their will is illegal under international law.

Unal Cevikoz, the deputy head of the main opposition Republican People’s Party (CHP), is among those who believe that Erdogan’s plans for northeastern Syria amount to an attempt at “demographic engineering.”

Cevikoz, who is also a retired Turkish ambassador, said in a recent interview that Ankara’s plan for a safe zone would divide Syria if it was implemented without consultations with Damascus.

Cevikoz — whose party hosted an international conference on Syria last week — said Ankara’s only way out of this situation was to talk with the Assad regime.

It is also not clear if Russia and Iran would accept Erdogan’s plans for northeastern Syria. Moscow has said in the past that lands captured in northwestern Syria by Turkey during previous operations should be handed over to the regime.

Iran says that all parties in Syria that have not been invited by the regime should leave the country.

Another insurmountable problem facing Ankara is the required financing for infrastructure projects in the proposed safe zones where millions of Syrians are to be settled.

He has used a mixture of enticements and threats to force European capitals to support Turkey financially as it copes with the burden of Syrian refugees.

Erdogan argued that a safe zone in Syria would prevent a new flood of refugees from heading to Europe. He also said that in the absence of such a zone Ankara will have no choice but to open the flood gates and let the refugees go to Europe.

Erdogan may keep everyone guessing about his next moves in Syria, but it is not clear if he has the answers himself.