The fact that the CHP now defends human rights with references to “our beloved prophet” is a remarkable new reality in Turkish politics. 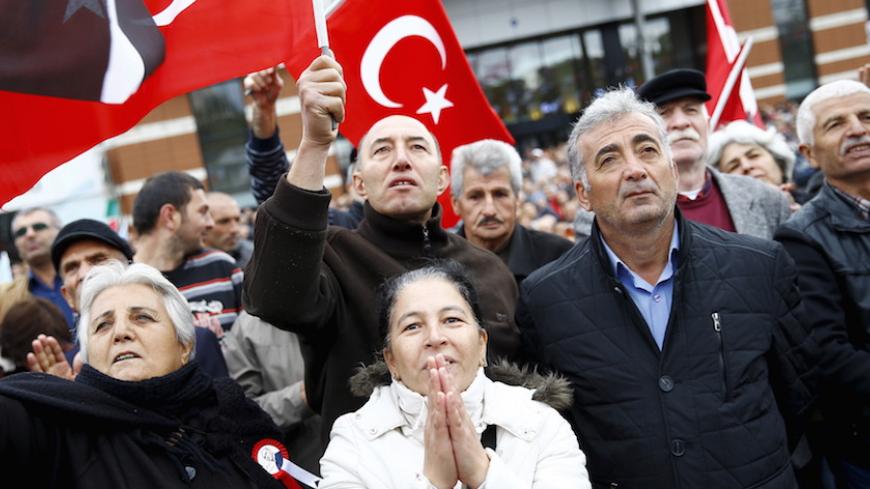 Since its founding by Mustafa Kemal Ataturk in 1923, the People’s Republican Party (CHP) has been the staunch defender of Turkey’s French-style secularism. It always opposed using religious references in politics, arguing that it would amount to the “exploitation” of religion for political ends. It also opposed, for decades, “religious symbols in the public space,” such as the Islamic headscarf.

Yet the CHP has been changing lately, especially since Kemal Kilicdaroglu became its leader in 2010. First the CHP abandoned its intolerance for the headscarf, accepting hijab-wearing women’s right to go to college or get public jobs. Then it welcomed some conservative politicians with Islamic credentials to its ranks, such as Mehmet Bekaroglu. Moreover, Kilicdaroglu began to allude to Islamic values to support his arguments.

One notable example of the latter trend came last weekend, when Kilicdaroglu gave a press conference criticizing the mass purges and arrests the government initiated after the failed coup attempt of July 15. One of the violations he criticized was the arrest or suspension of the family members of some of those who are accused of the coup plot. For example, when the police could not find Adil Oksuz, a suspected civilian mastermind of the coup who is on the run, the man’s mother-in-law, father-in-law and sisters-in-law were detained. Against such persecution, Kilicdaroglu said:

“There is a principle called individual criminal responsibility. They [the government], however, created a notion of collective crime. … Let me refer to the farewell sermon of our beloved prophet, which is accepted as one of the most important human rights declarations in history. Here our beloved prophet said, ‘Everybody is responsible for his crime; a person’s crime can never be associated with his mother, father or child.’ This, in fact, is a universal rule. The Universal Declaration of Human Rights declares the same norm.”

The farewell sermon Kilicdaroglu referred to was delivered by the Prophet Muhammad to his followers near Mecca in 632, soon before his death. It has been one of the key documents in Islamic history, with important moral injunctions on various matters including, indeed, human rights. “O people! Your Lord is one and your father is one,” it reads, for example. It continues, “There is no superiority of an Arab over a non-Arab, nor of a non-Arab over an Arab, nor of a white over a black, nor a black over a white.”

What is more important for Turkish politics today, of course, is not the content of the farewell sermon, but how it has become a reference for human rights — and in the hands of the all-secular CHP, among all parties. This, I believe, underlines two important facts.

The first is that the CHP is now finally “getting religion.” It is, in other words, understanding that religion, in particular Islam, is deeply rooted in Turkish society, and a political party that does not comprehend this fact is doomed to be marginalized. One could argue that this change was forced on the CHP by the ruling Justice and Development Party (AKP). The latter not only ended the secularist hegemony in the state, but also spearheaded the rise of a more religious rhetoric in society. But then the CHP is only wise to adapt this transformation, as its old, rigid secularism was already out of fashion.

The second important fact is that in the past few years, the CHP gradually established itself as the party that defends human rights, civil liberties and rule of law against an authoritarian state. That, too, is a novelty in Turkish political history. Because, with the exception of its short-lived flirtation of “social democracy,” the CHP has traditionally been the party that defended the state against those who defended human rights, civil liberties and rule of law. This was true even in the first decade of this century, when the AKP controlled the government and the CHP was in the opposition. As paradoxical as it may sound, the AKP was the defender of liberal values in those years, whereas the CHP still identified with the draconian state, which was then still under the control of the secularist military and judiciary. With the AKP’s full dominance of the state, however, that anomaly ended. The CHP is now a real opposition party that opposes a growing authoritarian state.

What does this all mean? It all means that those who hope for a more liberal and democratic Turkey, including religious conservatives who are disillusioned with the AKP, should give the CHP a chance. Yes, the party’s 20th-century heritage includes many unpleasant episodes of authoritarianism. Yet there is a increasingly “New CHP” that Kilicdaroglu has promised to mold. The very fact that the party now defends human rights with references to “our beloved prophet” is a remarkable indication of that new reality in Turkish politics.