A new brand of literary magazines that present thinly veiled messages of popular resistance against increasing social, cultural and political pressure from the government have so far evaded censorship and are delighting more readers every day. 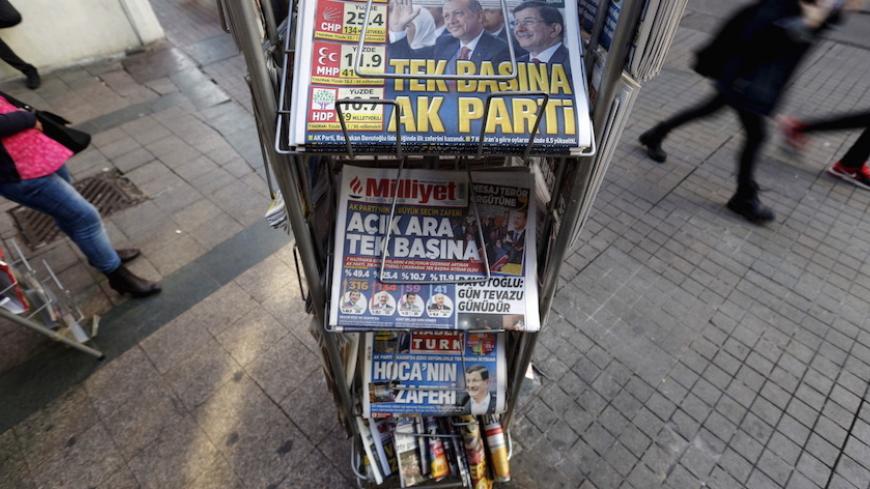 People walk past by a kiosk in central Istanbul, Turkey, Nov. 2, 2015. - REUTERS/Murad Sezer

The first time I saw Ot Dergi, or Weed Magazine, was when it was in the hands of teenagers who had just finished their recycling jobs in the hipster Cihangir district of Istanbul in July 2013 — a month after the Gezi protests. When asked what was so amusing, one of them said, “It is the weed, but not the joint — the writing here.” And he started reading a part of an old Turkish poem about living with dignity and hard work. One of them said, “We are not leftists, rich or interested in protest, but there is truth in some of these lines. Life on the streets is about resilience.”

That was my introduction to the hybrid form of literature and art magazines growing in Turkey. In early 2013, they were seen as marginal. Today, about 20 of them are in the market and still growing in popularity. Avci Onurkan, editor of Fil (Elephant) and Yeni Harman Magazine, told Al-Monitor, “It is almost impossible to calculate the exact number of sales of print media, magazines or newspapers.” However, some of these magazines are now selling over 50,000 copies per month, higher than the circulation of several dailies.

All this is quite interesting, because almost all of them are exclusively available in print, at a time when print media is dying globally. The one exception is Ot Dergi, which recently launched an application for Android and iOS mobile devices. Yet they are marketed professionally with savvy and aggressive social media teasers. Still, to read the magazine you have to get out on the street and purchase the product.

Next, these magazines flourish with a “the more the merrier” attitude, enjoying and even encouraging cooperative competition among each other. They offer literary content, most of it traditional, but post it in sound bites. Their presentation is unconventional. For example, some sections of the text are printed in boldface, others in bigger fonts. And they offer a graphic design feast from one page to another. On one page there will be photos situated in the center of a piece, on others a digital drawing. They have color as well as photos in sepia. The old and the new appear together, and some pages are like notepads. Readers are encouraged to be a part of the process and pitch their own stories to the editors using the pages left for them in the magazine.

Bringing back the pen and the interactive relationship between readers and editors might be precisely why rumors spread during the Gezi protests that Ot Dergi members were the ones spreading the lightning-bolt slogans that were sprayed or chalked on the walls, streets and sidewalks all around Turkey. It was a movement called “poetry on the street,” and it also spread through social media with the hashtag #siirsokakta. Indeed, these magazines bring the streets to their pages and Turkish media outcasts back to the readers. For example, Bavul ("Luggage") Magazine has a section where the author analyzes the characteristics of a town from its residents’ trash cans. There is room to discuss sexism, political correctness, being poor, disadvantaged or LGBTI, all of which rarely appear in mainstream media.

Since Gezi, the Justice and Development Party (AKP) government has held even stricter dominance over the mainstream media. Yet, the monopoly on dozens of media outlets has led to an awfully boring media profile in Turkey, where newspapers come out every day with almost identical headlines and columns.

These literature magazines stand as an antidote to the monotony of the mainstream. Their contributors are not all literary figures, but, they are all accomplished notables in their own fields, such as Barbaros Sansal, a prominent fashion designer, or Tarkan, a singer. They turn their fans into readers. People whose voices are otherwise unheard write stories or anecdotes in these magazines, mesmerizing the readers. If this is the generation of instant gratification, then we can say these magazines provide prompt satisfaction with a pleasant presentation.

Another common factor of these upbeat creations is that all have management that works behind the scenes. They refer to themselves as the “kitchen staff of the magazine.” They are young journalists who Candas Tolga Isik, the senior editor of Kafa ("Head") Magazine, describes as clear minds untainted by the mundane arguments of Turkish media platforms. These motivated amateurs are well connected to the urban and suburban readers who are fed up with the depressing content of the mainstream media. While all branches of the arts are suffocating under the AKP’s increasing regulations, these magazines' sales have skyrocketed on the sidelines.

Their popularity has also generated criticism from both the left and the right ends of the ideological spectrum. On the right, we see that conservatives have raised concerns about these magazines because of their amplified impact on young people and because of the publications' potential impact to strengthen left-leaning political audiences in Turkey. In response, conservative versions of these magazines have also popped up on the market. Their content is heavier than their leftist versions, and despite their superior production quality, they are much less popular on social media. The conservative literary magazines have so far failed to generate an alternative product, and some have editors who are employed by pro-AKP media organizations. AKP parliamentarians even tweet about them in an effort to increase circulation.

Literary critic Can Semercioglu, an editor of online Diken news, accepts that the left-leaning magazines influence the identity that young Turks want to construct for themselves on social media. “Yet we do not see a significant impact by these magazines on mainstream media and political rhetoric,” he told Al-Monitor. Semercioglu, along with others, is concerned about the populist tendencies these magazines acquire while increasing their popularity.

Yusuf Kot, publisher and visual director of CF magazine, told Al-Monitor, “The readership of literature and arts magazines do not watch live television. They watch sitcoms online and follow social media. Then they deliberately choose a magazine, identify with it and become dedicated readers of this publication.” Kot told to Al-Monitor that while leftist, pro-Gezi publications such as “Bavul, Kafa and Ot foster a strong anti-government attitude, on the other side, Cins and CF refrain from encouraging further polarization.”

Although the covers of these magazines tend not to use the word “political” and emphasize the arts, literature, philosophy and the street, the discussions they generate by their presentation style, advertisements and word choices center on contemporary politics. In a way, these magazines are helping the left reinvent itself in a satirical, lyrical and at times cynical yet cutting-edge way.

These magazines are popular because they tell people they can make them smile again, even if for a little while. They ridicule authoritarian language with a shrewd riddle. Most importantly, they are keeping the pulse of young people in Turkey. Because they are seen as light and goofy, they have so far managed to escape the wrath of governmental censorship, but just like the nursery rhymes that have survived for centuries, some of these magazines’ slogans, images and poems have infiltrated the minds and mobile devices of the younger generations in Turkey. We cannot calculate precisely how strong their political effect will be, but they are likely to outlast the existing ruling elite.