Turkey’s press freedom record is poor, but assertions that Turkish Prime Minister Recep Tayyip Erdogan controls Turkish media are an exaggeration, because 65% of Turkish newspapers remain in the opposition camp. 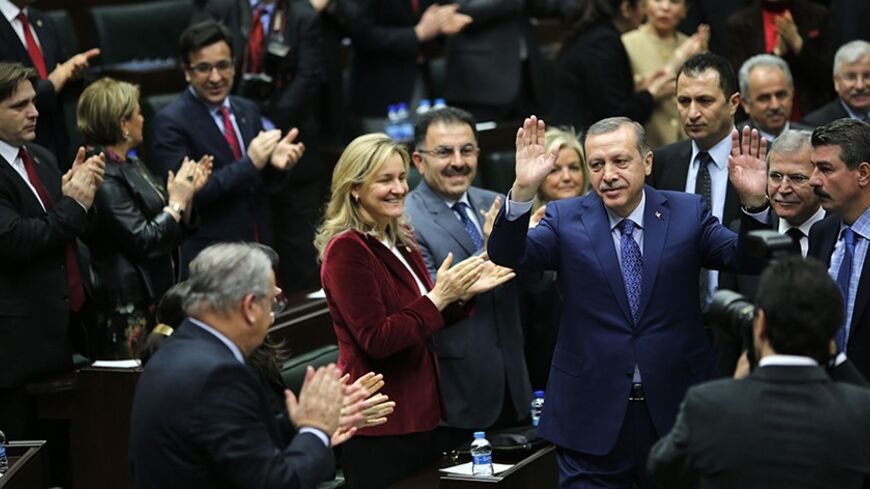 Turkey's Prime Minister Recep Tayyip Erdogan greets his supporters as he arrives at a meeting at the Turkish parliament in Ankara, Feb. 18, 2014. - REUTERS/Umit Bektas

A great political war is under way in Turkey in the run-up to the March 30 local elections. Pitched against each other are Prime Minster Recep Tayyip Erdogan’s Justice and Development Party (AKP) government and the Gulen movement, which is deeply entrenched in the state, mainly in the judiciary and the intelligence apparatus. Erdogan calls the secret Gulenist organization within the government a “parallel state” and pledges to purge it by legal means. He appears likely to succeed in this endeavor, with popular support overwhelmingly behind him.

Meanwhile, the Gulenists keep posting online the video and audio recordings they have amassed from intelligence archives. No one is even denying now that the confidential recordings are disseminated by the Gulenists. The war is being waged that openly. The wiretaps the Gulenists have leaked on the Internet include Erdogan’s conversations with a media executive who is close to him. Erdogan is heard meddling in broadcasts, saying what should be aired and what not. It’s a wrong, problematic behavior, which has fueled the rhetoric that the Turkish media is under Erdogan’s control.

I tried to analyze the backdrop of the problem in an earlier article for Al-Monitor titled “Press Freedom in the New Turkey.” The state has a pivotal role in Turkey’s economy, still distributing economic rent and public tenders. Hence, a skewed relationship exists between media bosses and the state. Mainstream media bosses in particular are people who have chosen to grow rich through public tenders. As a result, governments have always sought to influence the media as much as their power allows. Sometimes mainstream media have grown so strong that they have acquired the clout to determine governments. Drawing on that potential power, the Erdogan government, too, is seeking to steer the mainstream media. The latest incident is an illustration of those attempts.

Turkey’s mainstream media and governments have always had an extremely problematic relationship. Erdogan tries to interfere as much as he can with bosses who have dealings with the state. The bosses, for their part, aspire to win tenders in return for their support.

Yet, the majority of the mainstream media remain strongly critical of Erdogan. There is nothing whatsoever like Erdogan’s full control of the mainstream media. This corrupt order will live on unless media bosses are legally barred from dealing with the state. A media boss without economic ties with the state would enjoy freedom vis-a-vis the government.

Meanwhile, there are a good number of newspapers in Turkey that mount ferocious attacks on Erdogan and the AKP government, routinely employing a language that could qualify as outright swearing at Erdogan. In terms of circulation, the opposition media is bigger.

Atilla Yayla, a Turkish intellectual who advocates press freedom and is known in the West as the head of the Liberal Thought Society, makes an objective analysis of the problem that deserves to be carefully read:

“In various realms today. we come across more and more frequently expositions that are hasty, detached from reality and devoid from a sound and tangible basis — that is, from accurate facts. One of these expositions concerns the media. Some say the media is fully or almost fully under government control. They argue that writing anything against the government’s liking has become impossible, that the government is never criticized or inadequately criticized in the media, that there are no autonomous or independent media left, that some prominent figures stand no chance of writing in the media and that this is an obstruction of their right to freedom of expression.

“If a [foreign] observer with no links to Turkey visits the country to look for evidence to prove this argument, he/she would fail to find sufficient evidence. The observer would discover that the government is far from even largely controlling the media, let alone fully controlling it.

“Newspapers opposed to the government include Posta, Hurriyet, Milliyet, Vatan, Radikal, Sozcu, Aydinlik, Yurt, Taraf, the Gulen movement’s Bugun and Zaman, the nationalist-Islamist Yeni Mesaj and the nationalist Yeni Cag and Orta Dogu. Socialist-Kemalist dailies such as Sol and Birgun can also be included in this group. Government supporters, meanwhile, include Sabah, Yeni Safak, Star, Turkiye, Aksam, Takvim and Akit. The first group is almost the double of the second one, both in terms of their number and circulation. Then, how is it possible to argue that the government controls the media?”

Let’s take a look also at Turkey’s English-language newspapers. Both of them — Hurriyet Daily News and Today's Zaman — are hard-line government opponents. The government is said to tightly control the media, but lacks a single supportive foreign-language newspaper that would relay its views and activities to embassies and foreign readers.

The media debate often overlooks the satirical magazines. According to Ferzende Kaya, the Deve magazine manager who is closely familiar with the sector, those magazines have a weekly readership of 1 million, mostly young people. The magazines largely shape the political views of a significant portion of those young people. Needless to say, the satirical magazines are all leftist-Kemalist and avowed government opponents. Why would a domineering government leave this realm unattended?

To prove their case, those who claim an “awful” government oppression of the media always point to two columnists who have lost their jobs. The independent liberal intellectual Yayla recounts the following incident in this context: “At the Liberal Thought Congress 2013, Turkish-Armenian journalist Markar Esayan got frustrated when a speaker raised for the nth time the issue of the two people around whom hell was being raised on grounds they were barred from writing [in newspapers], even though he had already repeatedly explained the issue. Esayan then revealed that when he served as Taraf’s editor-in-chief he had offered those people ‘to either write columns or take over the reins of the newspaper as managers,’ but had his offer turned down. His interlocutor must have either lost touch with reality or been blinded by hatred since he completely ignored this factual correction and went on with his angry comments.”

The media’s control by a single power is never desirable. But efforts to monopolize the media will never end either. Not only governments, but any kind of administrative, bureaucratic or economic power centers may aspire for a full control of the media. In democracies, however, this should not be allowed to happen. Yet, the notion of a fully independent and impartial media is an illusion. Imaginary impartiality or independence is not the answer to preventing the media from becoming monophonic. The answer lies in improving professional ethics to ensure greater respect for universal journalistic norms and diversifying the media as much as possible. The pluralism and diversity in today’s media is at a scale unprecedented from the 1960s to the early 2000s.

One should not ignore the following point: The AKP has been in power for 11 years, but 65% of newspapers remain Erdogan’s opponents. The mainstream media is run almost entirely by government opponents. The columns, too, are entrusted to government opponents, barring a few pro-government writers who have been given space as a gesture. And for those who don’t cherish the high wages of the conglomerate media, mounting daily attacks on Erdogan right from the front-page headlines remains possible, too.