Erdogan’s 'win-win' on the world stage

Lately, Turkish President Recep Tayyip Erdogan has been a master poker player with global leaders: He not only plays his own cards well, but he can also see the cards in the hands of others. 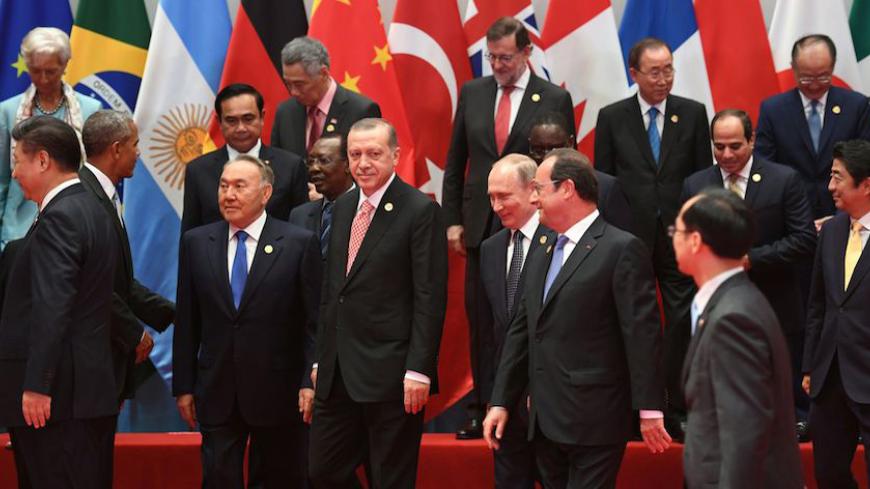 In the Sept. 1 Financial Times, Simon Kuper’s column “How Turkey tramples free speech” had the following accurate observation: “A modern Turkish government has probably never been so central to geopolitics. Western leaders want [President Recep Tayyip] Erdogan’s help to fight [the Islamic State (IS)], to minimize the horrors in Syria and to keep Middle Eastern refugees out of Europe. If he cooperates, the West will allow him his excesses. But Erdogan is now snubbing Europe and the US and flirting with Russia and Iran. He is also going freelance in Syria: Turkish artillery and jets are helping Syrian rebels fight the Kurdish militia.”

It is true that the current Turkish government is central to geopolitics, and there is no one who is more aware of this fact than Erdogan himself. His awareness — and perhaps even more than that, his political wit — is the main reason he is snubbing Europe and the United States and going freelance in Syria.

His snubbing produced dividends, and his contacts with US President Barack Obama, Russian President Vladimir Putin and German Chancellor Angela Merkel at the G-20 summit in Hangzhou, China, are clear indicators of this.

Anybody who knows Erdogan closely and understands his modus operandi knows that his flirting with Russia and Iran was a “win-win” policy.

And he won. Erdogan is like a master poker player. He not only plays his own cards very well, but he also has the gift of seeing the cards in the hands of the others across the table.

His one-on-one meeting with Putin was not expected to be dramatic. They know each other very well, and they have similar mindsets.

The Aug. 9 Erdogan-Putin rapprochement in St. Petersburg continued in Hangzhou as business as usual and reached new heights in the cooperation against IS in northern Syria. They spoke on the phone Sept. 8, and the tacit cooperation on Syria between the two leaders led to announcements from both the Kremlin and the Turkish government. The Kremlin’s announcement was at 10:45 p.m. Turkish time, emphasizing the agreement of both leaders on the continuation of the peace efforts in Syria, followed only 10 minutes later with the more specific announcement of the Turkish presidency, mentioning that both presidents agreed that the efforts to reach a cease-fire in Aleppo for the upcoming Muslim religious holiday has to be intensified. It referred to the efforts in this regard of Russia and the United States.

A few hours before that announcement, Erdogan, with clear self-confidence, said, “Without Turkey’s consent, no scenario can be executed in Syria.”

This is an apparent reversal of fortunes for a leader and his country; only a short while ago, Syria meant Erdogan’s decline and Turkey’s doom.

Syria is still a very risky, uncertain case, but compared to earlier circumstances, it is a colossal turnabout.

Interestingly enough, the change of direction in Syria was thanks to the United States. Erdogan received what he wanted from Obama in Hangzhou, as Soner Cagaptay, the director of the Turkish Research Program at The Washington Institute, put it accurately, “a tender loving care, which he had not gotten a lot lately.”

To the dismay of Erdogan’s critics, Obama — during the meeting and later on — spoke only about his support for Turkey, did not bring up the crackdown on the press and did not mention the mass arrests that followed the coup.

Kuper, who wrote prior to the G-20 summit, “If Erdogan cooperates, the West will allow him his excesses,” has been vindicated by the account of the Erdogan-Obama meeting.

Obama, after voicing his strong support of Erdogan and Turkey, ended his remarks in the joint press conference as follows:

“So, Tayyip, once again, it’s good to see you. We're glad you're here, safe, and that we are able to continue to work together to build on the strong alliance and partnership that we've established during the course of my presidency.”

The apparent affection he displayed for his Turkish counterpart was reciprocated. Erdogan responded with equal warmth: “President Obama, thank you. Barack, thank you. … It's a pleasure for me to get together with you within the framework of the G-20 summit here in Hangzhou. In the aftermath of the July 15th failed coup, we've had a telephone conversation and this is the first time we got together in order to see each other face to face. And I would like to thank you for your support against this coup attempt.”

The way he spoke, the words he chose were in stark contrast to the language he and his loyalists used earlier in blaming America for the failed coup.

On Sept. 6, The New York Times published an interview with Deputy Prime Minister and government spokesman Numan Kurtulmus. He said, “Our official position is clear. We don’t see any evidence that US officials supported the coup d’etat.”

The case is closed. Now that Obama is onboard with Erdogan, officially endorsed allegations linking Washington with the failed coup have been dropped.

Erdogan went from being snubbed by Obama during his visit to Washington in February to being pampered by the same Obama at Hangzhou in September.

That could be realpolitik for Obama, but for Erdogan, it is a great leap forward, indeed.

Erdogan’s stature in front of the most powerful and important European leader, Germany’s Merkel, also merits attention. The image of their bilateral meeting in Hangzhou that seemingly showed the German chancellor humiliated by him triggered anger in the German media. Die Welt likened Merkel next to Erdogan, looking like a governor suffering under the weight of a crime she committed, being received in the court of the sultan.

That could be an imperative realpolitik move for Merkel. She needs Turkey to stem the flow of refugees into Europe, which is the biggest concern of the European Union. Yet, Die Welt insisted that Germany should have a red line in regard to respect and that one of Merkel’s obligations is to demonstrate that Berlin is not a Turkish province.

The G-20 summit in Hangzhou became a stage to see how shrewd Turkey’s president is. It is a foregone conclusion now that he will outlive Obama and maybe Merkel, as well.

Similar to Putin, he will be regarded as a veteran international political actor.