Despite Turkish President Recep Tayyip Erdogan's efforts to paint a picture of international support for his Syria policies, US President Barack Obama has continued to reject Turkey’s proposals for a safe zone in Syria. 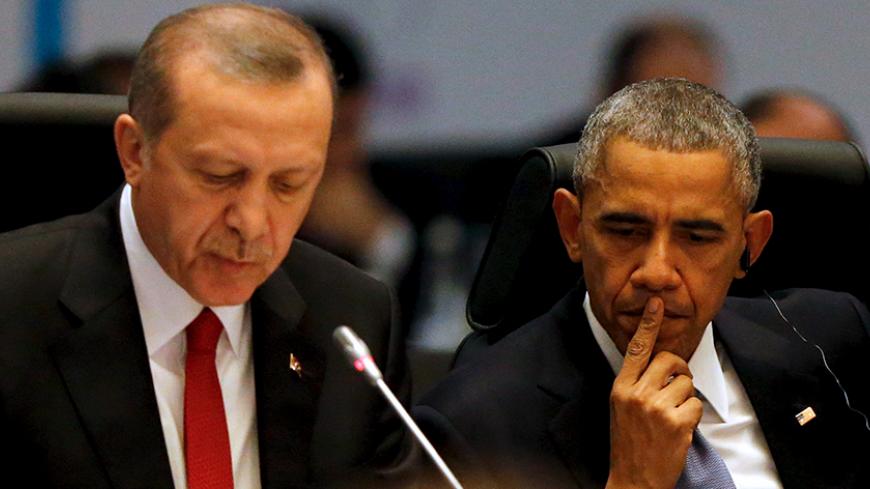 US President Barack Obama (R) listens to opening remarks by Turkey's President Recep Tayyip Erdogan (L) at a working session on the global economy with fellow world leaders at the start of the G-20 summit, Antalya, Turkey, Nov. 15, 2015. - REUTERS/Jonathan Ernst

For some, the G-20 meeting in Turkey Nov. 15 that brought together leaders of the “global elite” was to serve as the coronation for Turkish President Recep Tayyip Erdogan, who was still basking in his party's stunning Nov. 1 election victory. The eyes of the whole world would be focused on the meeting — and Erdogan, as its host. Luminaries were to include US President Barack Obama, Russian President Vladimir Putin, German Chancellor Angela Merkel, Saudi Arabia's King Salman bin Abdul-Aziz Al Saud, UK Prime Minister David Cameron and French President Francois Hollande.

The summit, held in the Mediterranean resort province of Antalya, would also enable Erdogan to further promote his policies and position on the Syria issue. Turkey has been pushing for a “safe haven” in northern Syria as well as a no-fly zone for a long time.

However, on the night of Nov. 13, the Islamic State (IS) engineered carnage in Paris that would overshadow the event. Hollande canceled his trip to the summit.

Nonetheless, at the end of the summit, if one tried to decipher the meeting's outcome based solely on Erdogan’s remarks, one could have easily concluded that Turkey’s strongman had his way with the international system. He conveyed the idea that a consensus was reached on the points he took up, all of which were already familiar to Turkish ears.

Terrorism knows “no religion, nationality, race or region,” he said. “Any link between religion and terrorism is blasphemous for those who are faithful to that particular religion.”

He added, “The threat of terrorism should be confronted resolutely without making any distinction among the terrorist organizations. Thus, in our eyes, anybody, any country, making such a distinction is committing a grave error. We will be waging a resolute struggle against the terrorism of [IS], and also against al-Qaeda, Boko Haram” and other groups.

While the G-20 leaders focused their attention on IS, Erdogan's list of targets included Syrian Kurdish organizations fighting against IS, such as the Democratic Union Party and the People's Protection Units, and the Kurdistan Workers Party (PKK) and the Revolutionary People's Liberation Party-Front in Turkey. The PKK recently took part in liberating Sinjar in Iraq from IS.

Ironically, Hollande, speaking at the French parliament only minutes after Erdogan’s remarks in Antalya, left out the archenemy of the Turkish government, Syrian President Bashar al-Assad.

Hollande said, “Our enemy in Syria is [IS], so it’s not about containing but about destroying this organization to save [not only] the populations of Syria and Iraq, but also Lebanon, Jordan, Turkey and neighboring countries. It's also to protect us, to prevent this from happening on our soil.”

Russia's Putin also had strong words regarding the fight against terrorism. “Especially after the Paris tragedy, we all understand that the means of financing terrorism should be severed,” he said.

He raised many eyebrows and left the strong impression that the G-20 summit could not overcome the deep fissures in the Syrian issue.

“I provided examples related to our data on the financing of Islamic State units by [business people] in various countries. The financing comes from 40 countries, as we established, including some G-20 members,” Putin told reporters following the summit.

And who were among those “some G-20 members?” Saudi Arabia comes to many minds, along with the host country of the G-20 summit. Putin’s statement implicating Turkey was widely covered in the Turkish media — at least the outlets that are not pro-government.

Russia has also presented satellite images and aerial photos showing the true scale of the IS oil trade, Putin noted. The Financial Times addressed that topic Oct. 14 in a lengthy and detailed story, supported by maps and diagrams.

But without a doubt, the most heartbreaking statement for Erdogan came from “the most favored guest” of the G-20 summit, the US president. Obama put the last nail in the coffin of the debates concerning a safe zone and no-fly zone in Syria.

“There have been some who are well-meaning, and I don’t doubt their sincerity when it comes to the issue of the dire humanitarian situation in Syria, who, for example, call for a no-fly zone or a safe zone of some sort. … After we’ve gone through a lot of planning and a lot of discussion, and really working it through, it is determined that it would be counterproductive to take those steps — in part because [IS] does not have planes, so the attacks are on the ground,” Obama said.

“A true safe zone requires us to set up ground operations. And the bulk of the deaths that have occurred in Syria, for example, have come about not because of regime bombing, but because of on-the-ground casualties,” Obama said. He noted that implementing a no-fly zone would raise many questions: “Who would come in, who could come out of that safe zone; how would it work; would it become a magnet for further terrorist attacks; and how many personnel would be required, and how would it end?” His statement was unequivocal.

He also indicated how much the White House differs from Ankara in determining what constitutes terrorist organizations. While Erdogan never neglects to include the names of Syrian Kurdish organizations in his “cocktail of terrorists,” Obama sees them as partners in combating IS.

“On the military front, our coalition is intensifying our airstrikes — more than 8,000 to date. We’re taking out [IS] leaders, commanders, their killers. We’ve seen that when we have an effective partner on the ground, [IS] can and is pushed back. So local forces in Iraq, backed by coalition air power, recently liberated Sinjar. Iraqi forces are fighting to take back Ramadi. In Syria, [IS] has been pushed back from much of the border region with Turkey. We’ve stepped up our support of opposition forces who are working to cut off supply lines to [IS'] strongholds in and around Raqqa. So, in short, both in Iraq and Syria, [IS] controls less territory than it did before. … So a strategy has to be one that can be sustained. And the strategy that we’re pursuing, which focuses on going after targets, limiting wherever possible the capabilities of [IS] on the ground — systematically going after their leadership, their infrastructure, strengthening [Shiites] — or strengthening Syrian and Iraqi forces and Kurdish forces that are prepared to fight them, cutting off their borders and squeezing the space in which they can operate until ultimately we’re able to defeat them — that’s the strategy we’re going to have to pursue.”

After the long-awaited G-20 summit, if anyone were to ask about the balance sheet of Turkey's foreign policy, particularly on the Syria issue, the answer probably would be: We're still where we were before the meeting.