Turkish President Recep Tayyip Erdogan returns to the world stage after the G-20 summit, yet it's not clear whether he will be able to rise to the occasion and change his stance domestically in order to appear less authoritarian and anti-democratic. 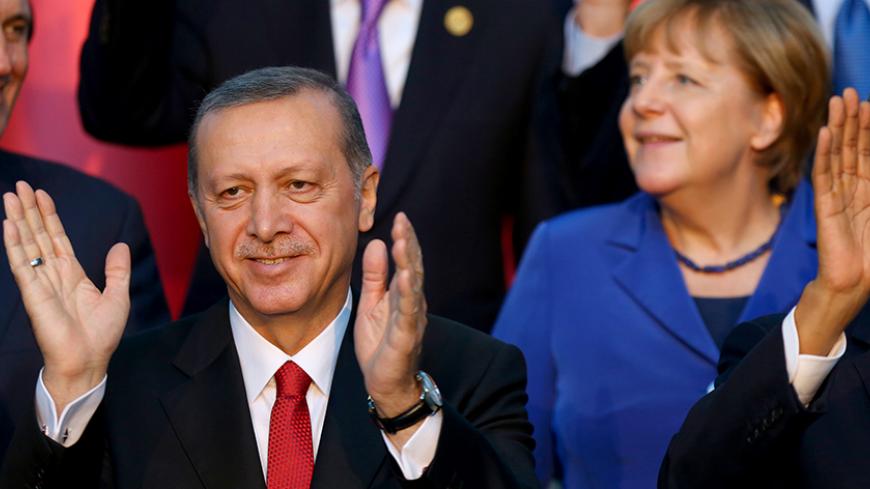 Coming right after the brutal Islamic State (IS) massacre in Paris, the G-20 summit in Antalya on Nov. 15 provided world leaders an opportunity to put aside differences over Syria in order to rally around the common cause of combating IS.

The summit also represented a personal triumph for President Recep Tayyip Erdogan, who has now broken his isolation and returned to the world scene as a regional player. What the Financial Times said of Russian President Vladimir Putin’s high-profile presence in Antalya is equally true of Erdogan, who has now moved from being “an outcast to problem solver.”

Erdogan is more than happy to be courted by the West, which until recently saw him as a “bete noire” over his authoritarian tendencies at home and generally abrasive and self-righteous approach to the West.

The landslide victory in the Nov. 1 election by the Justice and Development Party has also empowered him in the eyes of the international community.

A senior Western diplomat in Ankara made the following point to Al-Monitor. “Much was said before the elections with regard to [Erdogan]. But with hindsight, it is probably better for Europe and the US to have a strong government in Turkey at a highly volatile time like this in the region,” the diplomat said, speaking on condition of anonymity due to his sensitive position.

Erdogan’s “tete-a-tete” with President Barack Obama, on the sidelines in Antalya, was one of the high points of the summit for him. It signaled a new chapter in the relationship between the two men after a prolonged period of coolness due to Washington’s criticism of Erdogan’s policies at home and his apparent reluctance to toe the US line with regard to prioritizing the fight against IS in Syria.

Adopting the demeanor of a world leader, Erdogan told reporters after his talks with Obama that he had discussed “with Barack” the fight against IS. “And we had an opportunity to assess the steps that we will continue to take with respect to our efforts within the coalition in this respect. As model and strategic partners, we will continue to show solidarity with each other with an understanding to work for global peace,” Erdogan said.

In his own assessment of their talks, Obama also signaled a new period in ties with Turkey. “As President Erdogan noted, the skies have been darkened by the horrific attacks that took place in Paris just a day and a half ago,” he said, also paying tribute to those killed in the recent massacre by IS in Ankara. “Turkey has been a strong partner with the United States and other members of the coalition in going after the activities of ISIL, or Daesh, both in Syria and Iraq,” he added, using alternative references to IS.

The two leaders did not bring up the question of Syrian President Bashar al-Assad in their remarks, showing that this issue is on the back burner for today. Erdogan previously insisted that there could be no place in any talks for Assad.

Both countries continue to maintain that there is no future in Syria for Assad, but this has to be evaluated against the backdrop of the agreement arrived at in Vienna on Syria only days before the Antalya summit was to take place. That agreement, also endorsed by Turkey, foresees an 18-month transition period in Syria after which Assad is expected to remove himself from the scene.

Given the course that events in Syria have taken, shattering Turkey’s plans and expectations, Erdogan has little choice but to go along with a format that will see Assad in place for another year and a half at least, and probably longer.

The outline accepted in Vienna also marks a change in Ankara’s Syrian policy, which is now more in tune with its NATO allies, acknowledging as it does that the important thing for the moment is to fight IS.

Given his previous position, Erdogan is aware that he has to present an image of consistency for his supporters at home with regard to Assad. During the press conference after the final statement agreed on by the leaders at the G-20 summit was distributed to the public, he repeated that there was no future for Assad in Syria.

His remarks during the press conference, nevertheless, reflected less obsessing over Assad and more concern about getting it right politically for the future of Syria.

“The international community has to involve itself in effective cooperation, burden sharing, and sincere solidarity in the Syria affair now. Protecting Syria’s territorial integrity, clearing it of terrorism, and establishing a pluralistic, democratic and legal political system there are the principal aims of this process,” Erdogan said.

Put another way, Ankara is more concerned about keeping Syria intact now — undoubtedly because it does not want regions along its border with that country to be controlled by groups such as IS or autonomy-seeking Kurds, both of which are likely to happen if Syria is allowed to fall apart.

Ankara also has come around to accepting the importance of pluralistic democracy in Syria as a requirement for peace, having maintained at the start of the Syrian crisis, and especially after Mohammed Morsi came to power in Egypt, a barely veiled policy in favor of a Muslim Brotherhood-led regime in Syria, which has a Sunni majority.

There is also growing recognition in Ankara that it is promoting a hopeless cause in calling for a no-fly zone or a safe zone in northern Syria for refugees. During his press conference in Antalya, Obama made it clearer than at any time before that Washington remains highly cool toward the idea.

“It is determined that it would be counterproductive to take those steps — in part because [IS] does not have planes, so the attacks are on the ground. A true safe zone requires us to set up ground operations,” Obama said.

“Who would come in, who could come out of that safe zone; how would it work; would it become a magnet for further terrorist attacks; and how many personnel would be required, and how would it end — there’s a whole set of questions that have to be answered there,” he added.

Obama also made it clear that the United States has no intention of sending ground troops to Syria but will continue leading the air offensive against IS targets in that country. The dilemma for Ankara is that the absence of an international force in northern Syria leaves the Syrian Kurds as the favored choice for allies on the ground for Washington.

This means the Kurdish Democratic Union Party, and its military wing, the People's Protection Units, will continue to work with the US-led coalition, although Ankara is trying to have them listed as terrorist organizations because of their links to the outlawed Kurdistan Workers Party.

The diplomatic rumor in Ankara is that interim Foreign Minister Feridun Sinirlioglu’s effort to have these groups listed as a terrorist organization failed in Vienna because of strong opposition from the United States and Russia, which is also courting the Syrian Kurds.

Despite these problems, though, Erdogan came away generally satisfied from the G-20 summit, not only because of Turkey’s successful hosting of such a world event, which for all accounts went off without any glitches, but also because it raised his international profile.

The big question now is whether Erdogan will be able to rise to the occasion, having increased his international prestige, which will also require that he change his stance domestically in order to appear less authoritarian and anti-democratic, and reflect more respect for pluralism, which he is now supporting in Syria.

There are those who argue that he has little incentive to mend his ways in this regard, since it is Western leaders who are coming to him for help without expressing any preconditions to do with democracy or freedoms in Turkey.

All this aside, however, many are trying to cut through the diplomatic verbiage to gauge what was really achieved at Antalya with regard to fighting IS and the future of Syria. Asked to comment on this, retired Ambassador Ozdem Sanberk, who heads the Ankara-based International Strategic Research Organization, was cautious and somewhat skeptical.

“The leaders discussed Syria according to the format laid down in Vienna. But this has pitfalls,” Sanberk told Al-Monitor. “For example, what role will Assad have when the new constitution is being charted? If he takes part in its drafting, Syria may not be able to overcome its sectarian divisions in the future,” he added.

Sanberk also referred, with some reserve, to the collective resolve to fight IS displayed in Antalya. “The idea of a war on terror will only strengthen IS. France’s desire to avenge itself by hitting IS targets in Syria is legitimate, of course, but this is unlikely to have the desired result in the short run,” he said.

Sanberk added that what was important was to move from what he referred to as the “war mentality” to the “peace mentality” when combating IS.

“The real question is what kind of a Middle East do we want to see after IS is degraded. This is a topic that no one is talking about. There was not even a mention of it at Antalya, which is a 100% missed opportunity for such a gathering of world leaders,” he said.