Three groups are joining forces in hopes of ending the Palestinian division. 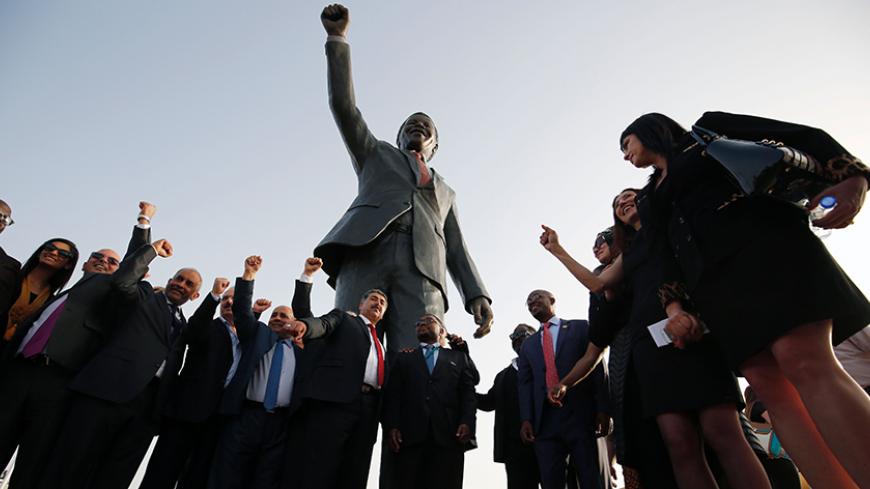 Palestinian and South African officials pose in front of a statue of Nelson Mandela during its inauguration ceremony in Ramallah, West Bank, April 26, 2016. - ABBAS MOMANI/AFP/Getty Images

RAMALLAH, West Bank — In an effort to end the nine-year division between Hamas and Fatah, South African Ambassador to Palestine Ashraf Suleiman will soon meet with groups that have developed initiatives toward that goal.

Suleiman is expected to start talks soon with Patriots to End the Split and Restore National Unity and the Palestinian Center for Policy Research & Strategic Studies (Masarat). He will seek to combine their initiatives with one recently revived by Awad Abdel Fattah, the general secretary of the National Democratic Assembly, along with activists and advocates for the Palestinian cause in South Africa, under the supervision of the Institute of Palestine and South Africa.

On Sept. 7, Abdel Fattah met with Suleiman to discuss the upcoming meeting, the date of which has not yet been set.

South Africa joined the Palestinian reconciliation and national unity efforts by sponsoring a South African initiative two years ago without much traction, but this year the effort has shown promise, as two Palestinian dialogue sessions were held in April and July in Cape Town. The sessions involved representatives of Palestinian factions, intellectuals, media personnel and independent figures.

By integrating the three initiatives, the parties hope to form a popular and intellectual movement powerful enough to end the division by pressuring the parties involved, Abdel Fattah told Al-Monitor.

“The South African move is designed to [connect] efforts and coordinate visions between the three initiatives in an attempt to combine them all and form a lobby. These are, namely, our initiative under the auspices of South Africa; the Masarat initiative, which managed to draft clear ideas on how to achieve a practical national program to end the split; and Patriots to End the Split and Restore National Unity, which has been active to bring about a comprehensive vision. This is the task that Suleiman will embark on through his meeting with those in charge of the initiatives," he said.

“The three initiatives converge on many ideas," he added.

South Africa will rely on its strong ties with Palestinian factions and the Palestinian Authority. Those ties have been demonstrated on more than one occasion, most recently in April when Palestinian President Mahmoud Abbas inaugurated Nelson Mandela Square in Ramallah, where a 20-foot statue of the anti-apartheid leader was erected. Former city of Johannesburg Mayor Parks Tau said during an April 25 press conference that Mandela’s statue is “a symbol of hope and inspiration for the people of Palestine to realize their freedom.”

Masarat Director General Hani al-Masri also emphasized South Africa's friendly relations with the Palestinians and its interest in ending the split. He told Al-Monitor that Masarat is ready to cooperate with all parties seeking to develop a formula to end the division and reshape a national program.

“Masarat has integral perceptions on how to end the split and achieve national unity. They were formulated in a national unity document, and we support all efforts to benefit from those perceptions," he said. “The document seeks to bridge the gaps and remove the obstacles to the previous agreements. Thus, we viewed that there is need for a full package, not a partial solution to contentious issues to be reached, that all [relevant groups] need to be involved, not only the factions, and that the focus should be placed on developing a national strategy.”

Masri said he welcomes the South African efforts and stressed that the Palestinian people need to be able to develop a third popular current to pressure the parties to the crisis.

Hamas and Fatah had several negotiation rounds to resolve their split, which goes back to 2007. During that time, they have signed numerous agreements in Egypt, Saudi Arabia, Yemen and Qatar, which have all failed to bring about a real reconciliation. Most recent among these agreements were the Beach Refugee Camp Agreement on April 23, 2014, and the failed reconciliation meetings in Doha, Qatar, on June 18, 2016.

Taysir al-Zubri, a member of Patriots to End the Split and Restore National Unity, told Al-Monitor, “We learned that South Africa has a project to resolve Palestinian differences and is collecting data from all national parties to reach a formula that would be agreed upon by all parties in the Palestinian arena.”

He added, “We have met with those in charge of the South African initiative [and] our views converged. We focused on how to move political dialogue to the Palestinian street, namely to involve institutions, unions, factions, human rights commissions and citizens to pressure the parties to the split.”

His group welcomes all delegations willing to work and coordinate to achieve national unity. He stressed that the organization "will examine all suggested ideas.”