The High Follow-Up Committee for Arab citizens of Israel has proposed a new initiative to achieve reconciliation between Fatah and Hamas, which includes the formation of a unity government and the holding of parliamentary and presidential elections. 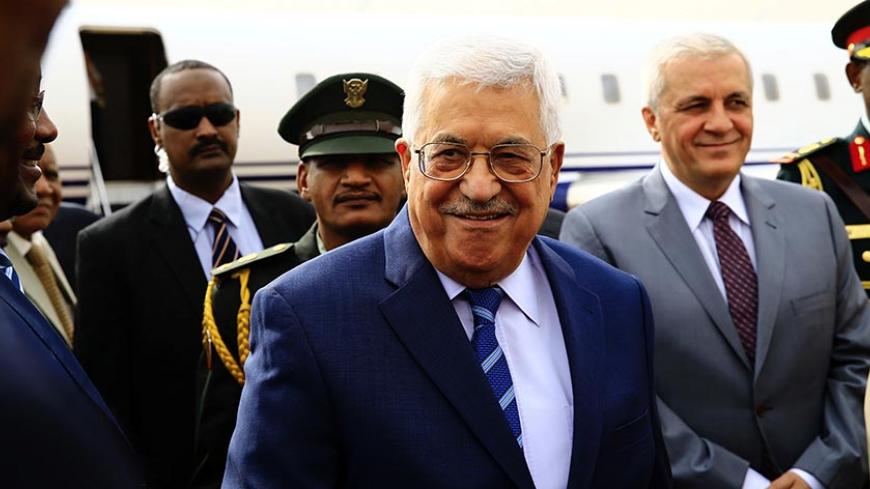 RAMALLAH, West Bank — Palestinian President Mahmoud Abbas approved the initiative of the High Follow-Up Committee for Arab Citizens of Israel to achieve reconciliation between Fatah and Hamas during his meeting with the committee members Aug. 13 at the presidential residence in Ramallah. The committee is the highest Palestinian political committee within the Green Line, and it includes Arab municipal leaders, Arab party members of the Knesset, representatives of political parties and Arab nonparliamentary political parties. Abbas gave the committee the green light to begin its calls with the parties concerned in the reconciliation case.

Head of the committee Mohammed Baraka said in a press statement Aug. 19, “This initiative was developed and its details were discussed with Palestinian groups concerned with the reconciliation issue, such as Patriots to End the Split and Restore National Unity and the Palestinian Center for Policy Research and Strategic Studies - Masarat, and with Palestinian figures such as Munib al-Masri and his group, Edgo, to agree on a joint course of action.” The plan was approved by Abbas during the Aug. 13 meeting.

The aforementioned parties held conferences and discussions about ways to end the division. Masarat has always welcomed influential political parties to discuss their vision about how to end the Palestinian rift. For his part, Masri and his group launched several initiatives and paid visits to the Gaza Strip for that purpose.

Member of the committee Taleb al-Sane told Al-Monitor that the initiative includes certain provisions and mechanisms to reach reconciliation, such as establishing a national unity government that consists of all factions, agreeing on a date for the elections within a period spanning from six months to one year (presidential and legislative elections and elections for the PLO National Council), respecting the election results and tasking the winner with forming the national unity government with all factions.

Sane said, “We proposed the initiative to Abbas who gave us the green light to move forward, and he agreed to the recommendations [regarding ways to end the division, the steps to reach reconciliation and under what conditions] that we will submit after finishing the calls with the different parties, mainly Hamas.”

The committee is making calls with Hamas leaders in the West Bank to arrange an imminent meeting with them and discuss the possibility of its visit to Gaza to meet Hamas leaders. A meeting with Fatah leader Azzam al-Ahmad is also being arranged to communicate with the Egyptian authorities that have been sponsoring the Palestinian reconciliation for years. Egypt brokered Fatah-Hamas meetings in the past and oversaw the details of these meetings. This will allow the committee to have an idea about what has been achieved, according to Sane.

If the efforts to form a national unity government fail, Sane said, “We will be open to suggestions and opinions from everyone. If we do not reach a consensus, the Palestinian people should be consulted and legislative and presidential elections should be held because the people hold the real privileges.”

Since the division in mid-2007, Fatah and Hamas have undergone several rounds of negotiations, and they signed agreements with Egypt, Saudi Arabia, Yemen and Qatar. But they all failed to achieve real reconciliation. The latest agreement was the Beach Refugee Camp Agreement on April 23, 2014, and the failed reconciliation meetings between Fatah and Hamas in Doha on June 18, 2016.

Member of the PLO’s Executive Committee Ahmad al-Majdalani told Al-Monitor, “The committee proposed an initiative to end the internal division and it will make all necessary calls with Hamas to complete this step. Abbas and the political parties — including Fatah — that participated in the meeting Aug. 13 agreed to the committee’s initiative, while waiting for the results with Hamas.”

He added, “Abbas gave the committee enough time to finish its calls with all parties and achieve results. Then there will be a meeting to assess it.”

Hamas leader Ahmed Yousef told Al-Monitor, “Hamas does not object to the provisions of the initiative of the High Follow-up Committee for Arab Citizens of Israel. On the contrary, the movement has called for forming a national unity government on several occasions, and it is willing to participate in legislative and presidential elections.”

He said, “Everybody will welcome this initiative, and it can succeed if the divided parties have political willingness.”

Yousef said that the initiative has several strong points, noting that “all Palestinians trust and respect the committee. Besides, its national aim is devoid of any political agendas and focuses on achieving unity without bias to one party. It can make progress in many pending issues.”

The committee can also move easily to the West Bank and meet intensively with officials in Ramallah to build the needed trust to achieve reconciliation, unlike meetings in Arab countries that take a long time to arrange.

Yousef added, “Fatah and Hamas have many things in common, and their differences are decreasing gradually as everybody has realized the importance of political partnership and reconciliation that can be reached in the presence of political will and trust.”

Director general of Masarat Hani al-Masri told Al-Monitor, “The division cannot end if the proposed initiatives do not include main issues such as the political program and national partnership. Holding presidential and legislative elections without reaching a consensual political program might lead to dire straits.”

Masri added, “A consensual political program can be reached through a comprehensive national dialogue in which all effective parties participate to pressure the adversaries and achieve reconciliation based on sane democratic foundations.”

Theoretically, the initiative of the High Follow-up Committee for Arab Citizens of Israel can achieve success in the presence of political will of the divided parties and a national conference to draft a consensual political program. But practically, Fatah and Hamas have not managed to settle their differences in the past nine years of division, despite dozens of initiatives and hundreds of meetings. It seems the Palestinian parties are not mature enough to prioritize unity and instill it.