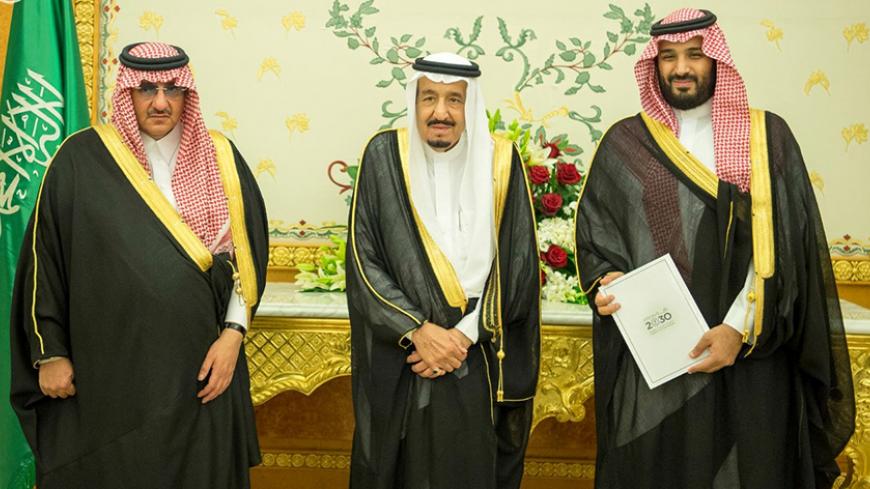 King Salman has instituted the most ideological, sectarian and assertive foreign policy in modern Saudi history. After decades of caution and risk aversion in Saudi Arabia, the king and his senior team have emerged as bold gamblers.

A year and a half after Salman decided to launch Operation Decisive Storm to halt Shiite Houthi rebels from taking over all of Yemen, Saudi Arabia has become engrossed in the most intense sectarian regional conflict with its historic rival Iran to date. Saudi-Iranian tensions are greater today than ever, and the cost to the entire region is deadly.

The Saudi decision to go to war 18 months ago was rushed and poorly thought through, with little concrete planning for how to achieve a decisive victory. The alliance to defeat the Houthis and their ally former President Ali Abdullah Saleh was hastily put together and lacked two critical players: Oman and Pakistan.

For Iran, the war has been a very cheap way to bog down its Gulf enemies in an increasingly expensive struggle while it continues to make advances in Iraq and Syria. Tehran's allies in both countries are gaining ground. Iran's role in Yemen has always been limited and inexpensive. The Iranians are quite willing to fight to the last Yemeni. They are also exploiting the war to inflame anger in the Shiite communities in Bahrain and in Saudi Arabia's Eastern Province.

Meanwhile, the war is damaging the kingdom's image in the West. A major review of the coalition's air campaign concluded this month that one out of three air strikes had hit civilian targets. The sites attacked have included mosques, schools and hospitals. The coalition air campaign depends on support from the United States and the United Kingdom, but there is rising criticism of such support and arms sales to Riyadh on both sides of the Atlantic. A Democratic congressperson has called the coalition's air war “illegal” and “reprehensible.” The controversy over the war has added to strong support on Capitol Hill for allowing lawsuits against Saudi officials for alleged involvement in the 9/11 al-Qaeda attacks. It is a toxic mixture.

Unlike the hajj in 2015, when close to 2,000 pilgrims died, this year's pilgrimage passed without major problems thanks in large part to improved Saudi measures to ensure pilgrims' safety. These included better monitoring of crowds and a sophisticated command center. The annual pilgrimage was, however, marred by an intense war of words between the Saudis and Iranians. Tehran complained that the Saudis' severing diplomatic relations earlier this year had prevented Iranian pilgrims from making the trip. Iran demanded that the Saudis hand over management of the hajj to an international Islamic authority.

The response by the Saudi clerical establishment was unprecedented. The kingdom's chief cleric, Grand Mufti Sheikh Abdul-Aziz Al Sheikh, declared that Iranian Shiites are “not Muslims” and said that they worship the ancient Zoroastrian religion of pre-Islamic Iran. Such rhetoric about Shiites as unbelievers harkens back to the early days of Wahhabism. One senior Saudi official, Prince Khaled al-Faisal, governor of Mecca, called the Iranians liars and slanderers for calling for changes in the administration of the hajj. Both Tehran and Riyadh are pouring gasoline on the sectarian fires in the Islamic world.

There is little evidence of second thoughts in Riyadh about its high-stakes diplomacy and rhetoric. Both Crown Prince Mohammed bin Nayef and Deputy Crown Prince Mohammed bin Salman have been staunch supporters of a tough line against Iran. Behind the scenes, there are persistent rumors of criticism of Mohammed bin Salman in his capacity as defense minister for his role in the Yemen conflict. There are not, however, any signs of displeasure from his father, King Salman, and that is the only thing that matters in an absolute monarchy.

There are hints that the Saudis want an even more ideological and existential battle with Iran. Former Saudi intelligence chief Prince Turki al-Faisal attended a rally by the Mujaheddin-e-Khalq, the Iranian dissident group, earlier this year in France and all but called for regime change in Tehran. Other Iranian dissidents have since attracted the attention of the Saudi media, including Arab separatists who want an independent Khuzistan. The Saudis have little or no capacity to seriously challenge the Islamic Republic at home, but these moves certainly bait Tehran.

Saudi foreign policy had for decades been cautious and risk averse. From King Faisal to King Abdullah, the kingdom avoided conflict if possible and preferred covert action to high-profile military intervention. Faisal fought Egypt in Yemen using proxies (Britain, Jordan and Israel) to arm the royalists. He sought the shah's support for the first Islamic summit. Khaled and Fahd stayed on the sidelines of the Iran-Iraq War, and King Fahd used Riyadh's pocketbook to force Iraqi President Saddam Hussein to accept the final cease-fire. In Afghanistan, Fahd funded a war fought by Afghans and Pakistanis. During the Arab Spring, Abdullah worked behind the scenes to oust the Muslim Brotherhood in Egypt and intervened with force only in tiny Bahrain.

With Salman's brothers thus having avoided costly foreign adventures and high-risk interventions, it is a significant departure to move to an ideologically driven sectarian agenda with high-risk adventures like the Yemen war. Salman's aggressive policies will be difficult to sustain, however, especially if oil prices remain depressed. Crown Prince Nayef's visit to New York for the UN General Assembly meeting this month provides a useful opportunity for US officials to press for a settlement of the Yemen conflict and de-escalation of sectarian tensions.