Rise of Iran-backed militias jeopardizes US aid to Iraq

US law prohibits military assistance unless Baghdad reins in PMU. 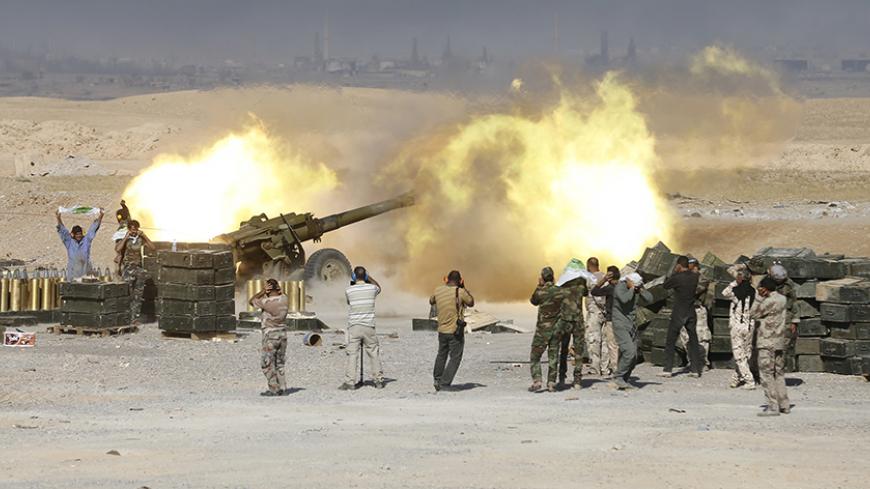 Iran-backed majority-Shiite militias known as the Popular Mobilization Units (PMU) have been gaining influence as they have helped the Iraqi army kick the Islamic State (IS) out of Anbar province. Iraq's National Security Council recently blessed their participation in the upcoming battle to retake the IS stronghold of Mosul, while Baghdad announced at the end of July plans to incorporate the militias as an "independent" military formation "affiliated" with the Iraqi armed forces.

The militias have also begun to make diplomatic overtures in a bid to attain international legitimacy. Several militia leaders met with European, Canadian and Australian diplomats in Beirut early last month, Al-Monitor reported at the time, hoping to create a back channel with Washington.

All those efforts now risk running into a congressional buzz saw. Current and pending defense authorization legislation prohibits US military assistance for Iraq if it risks falling into the hands of Iran-backed groups, and lawmakers are keeping a close eye on Baghdad's next move.

"This is an issue," said Sen. Ben Cardin, D-Md., the top Democrat on the Senate Foreign Relations Committee. "We haven't seen the complicity of the Iraqi government to encourage this, but we want to see a stronger effort to discourage it [...]. As a general principle, the Shia militias as currently constituted — and there are some exceptions to this — are not interested in the Iraqi security blueprint and are counterproductive to the security of the areas that we've taken back or want to take back from [IS]."

(Click here to view a pdf version of this chart)

The resurgence of the militias has concerned US policymakers since June 2014, when Iraqi Grand Ayatollah Ali al-Sistani issued a call to arms to his followers as IS rampaged through the country. Since then, Iraq has seen a proliferation of loosely affiliated PMU, most of them directed by or otherwise supported by Tehran, including some reconstituted militias that battled US forces in the early years of the invasion.

One of the main militias, the Hezbollah Brigades (Kataib Hizballah), was designated a Foreign Terrorist Organization by the State Department in 2009. Its leader, Jamal al-Ibrahimi — aka Abu Mahdi al-Muhandis — was designated as a threat to Iraqi peace and stability by the Treasury Department that same year and is now the deputy chairman of all PMU operations.

In December 2014, Congress for the first time authorized through the end of 2016 a $1.6 billion “train and equip” fund requested by the Barack Obama administration for “military and other security services" for Iraq. Lawmakers, however, added the caveat that aid recipients be vetted for links to “groups associated with the government of Iran.” The Department of Defense could waive aid restrictions but had to inform Congress.

Last year, Congress reauthorized the program but added a prohibition on aid to the government of Iraq unless Baghdad “has taken such actions as may be reasonably necessary to safeguard” such assistance falling into the hands of organizations “under the command and control of, or associated with” Tehran. That law also requires that the Pentagon provide quarterly reports on the “forces or elements of forces” prohibited from receiving US aid.

Now lawmakers are debating whether to go one step further.

The Senate version of this year’s annual Defense bill merely extends last year’s authorization through the end of 2019. The House, however, passed a bill requiring that the Pentagon provide $50 million to Kurdish peshmerga and Sunni tribal forces unless Baghdad ends its “support for Shia militias under the command and control of, or associated with” Tehran and acts to stop “abuses of elements of the Iraqi population by such militias.”

The House bill gives voice to rising concerns among lawmakers that the Shiite militias not only strengthen Iran's hand in Iraq but make it more difficult to defeat IS because they often victimize Sunnis. Speaking at the nonprofit Stimson Center in April, House Foreign Affairs Chairman Ed Royce, R-Calif., said he had recently met with Prime Minister Haider al-Abadi in Baghdad and urged him to rein in the PMU.

"The Sunni tribal leaders that we met with want to take their own villages back," said Royce. "Their people want to go back to their villages. They don't want to hand it over to some Shiite militia headed up by a Quds Force leader like [Qasem] Soleimani.”

Further complicating matters, a number of the militias are represented in parliament. A PMU leader at last month's Beirut meeting told Al-Monitor that the PMU have launched preparations to run in next year's parliamentary elections. The source made it clear that their model is Iran's Islamic Revolutionary Guard Corps (IRGC), which holds considerable political and economic sway.

"We will be a military force that is part of the Iraqi state, but not part of the Iraqi army," the PMU leader said. "This is due to many reasons that we explained to them, namely the corruption spread within the Iraqi government institutions."

The administration has also sent mixed messages as it has found itself fighting alongside the militias.

In its April 2015 update to its Travel Warning for Iraq, the State Department for the first time warned that “several anti-US sectarian militia groups, such as the Shia KH [Hezbollah Brigades] and Asaib Ahl al-Haq (AAH) [League of the Righteous] are operating throughout Iraq and may present a threat to US citizens.” By September 2015, however, those warnings had been replaced with a generic warning that “anti-US sectarian militias may threaten US citizens and Western companies throughout Iraq.” The change coincided with reports that US forces and Iran-backed militias were sharing a base in Anbar.

At a briefing in March this year, State Department spokesman John Kirby rebutted rumors that the administration had asked Abadi to disband the militias. He went on to praise them for joining in the fight against IS.

"This idea that every Shia militia, or Popular Mobilization Force that is another way they’re talked about, is controlled by Tehran and is therefore nefarious in nature is just false," Kirby insisted. "In fact, the vast majority of them have no connections to Tehran or to the IRGC."

The agency’s 2015 terror report, released in early June, by contrast faulted Baghdad for allowing Ibrahimi's group to join the fight. The report said Iran-backed groups such as KH "exacerbated sectarian tensions in Iraq" and "contributed to human rights abuses against primarily Sunni civilians."

"The inclusion of KH, a designated Foreign Terrorist Organization, in the Popular Mobilization Forces enlisted by the Iraqi government in the effort against [IS], threatens to undermine counterterrorism objectives,” the report concluded.

Cardin said he would welcome a move by Abadi to incorporate the PMU under the military's control. But there are exceptions.

"I think there are some militias that he will not be able to control," Cardin said. "Ultimately you have to disband them or weed them out. It's not in the central government's interest to have entities that are not really loyal to [its] security blueprint."

Iran appears to have others plans in mind.

Late last month, a leader in Iran's IRGC announced the creation of a United Shia Liberation Army to fight in Arab countries, notably Yemen, Syria and Iraq. Lawrence Haas, a senior fellow at the American Foreign Policy Council, said the announcement was "basically declaring war on your Arab neighbors." He questioned what the White House can do about it after removing most US troops from the country.

"I think Iran and Iranian influence in Iraq and other nations in the region is going to be pretty close to the top of the agenda for US foreign policy," Haas told Al-Monitor. “We don’t have much leverage, so I don’t have high hopes that we can reverse this.”