Why Is Jordan refusing entry to Gaza Palestinians?

More than 50,000 Gazans living in the West Bank are essentially trapped there, unable to cross into Jordan or go to Gaza. 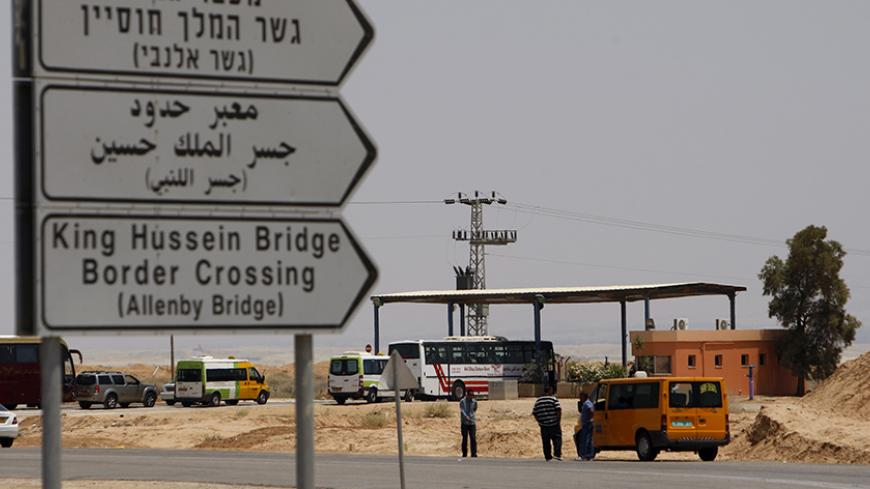 As part of his job, Muhaisen must travel to Jordan to meet with various cement companies, attend workshops and for other work-related reasons. Since summer 2015, however, Jordan has denied Muhaisen entry.

Muhaisen, whose wife and two children have Jordanian passports because they were born on the West Bank, have no problem crossing the King Hussein Bridge into the kingdom. Up until the summer of 2015, "It took a few days to get the Jordanian authorities to issue the needed permit, but since my last application in June [2015], I and many others have been regularly rejected,” Muhaisen said.

Wafa Abdel Rahman, another Gazan who lives in Ramallah, told Al-Monitor that in the second half of August alone, 850 Palestinians of Gazan origin had applied to enter Jordan or to travel via Jordan. The information was leaked to her by sources in the company that delivers the applications. “Only 20 out of the 850 were allowed entry,” she said.

Abdel Rahman said that while the problem applies to all Gazans — whether they reside in Gaza or the West Bank — the one group that is suffering the most are the 50,000 or so Gazans who live in the West Bank and have, over the years, had their residency changed with the approval of the Palestinian and Israeli authorities.

“Because those Gazans living in the West Bank are not allowed to travel to besieged Gaza, they can’t travel anywhere else, while those in Gaza have the opportunity to leave, albeit rarely these days, as Egypt is constantly closing the Rafah crossing between Gaza and Egypt,” Abdel Rahman said.

The problem has become so acute that Human Rights Watch issued a statement May 16 calling on the Jordanians to ease the movement of Gazan Palestinians. The organization was unable to obtain a statement from Jordanian officials regarding the ban. Al-Monitor has also been unable to get information on the travel ban.

Many Jordanian policies have been the subject of intense discussion, but it has been taboo to talk about the King Hussein Bridge policy due to its sensitivity because of the fear of mass deportation of Palestinians. The issue here is to how decisions are made in regard to travel across the bridge, which is the only connecting point between Palestine and Jordan, and by extension, the only connecting point for West Bank Palestinians (East Jerusalem residents excluded) to the rest of the world.

The Jordanians' bridge policy is unknown and undeclared. Jordan signed a peace treaty with Israel in 1994, and there are two official Jordanian-Israeli crossing points, in the north and south. as an occupying power, Israel controls the Jordan crossing on the West Bank side of the King Hussein Bridge. The West Bank was part of Jordan when Israeli seized and occupied it in 1967, and although King Hussein severed administrative ties with it in 1988, Jordan has not constitutionally ceded the territory. The bridge is therefore not considered an international border, although Jordan recognizes Palestine.

Regardless of legal definitions, some 2.8 million Palestinians living in the West Bank and holding passports issued by the Palestinian government have no possibility to travel after Israel, in 2000 following the second intifada, blocked them from using Ben Gurion International Airport. The only available exit route for West Bank Palestinians is the King Hussein Bridge.

One theory as to why Jordan is denying entry permits is that officials fear that Gazans will come to Jordan and never return. Another theory is that Jordan is secretly carrying out punishment to Gazans because of the rivalry between Palestinian President Mahmoud Abbas and the Gaza-born Mohammed Dahlan.

All Palestinians have Ramallah-issued passports, and the Oslo Accord, through which the Palestinian Authority (PA) was created, clearly stipulates that the West Bank and Gaza are one administrative unit and that free access is to be allowed between Gaza and the West Bank as well as between the Palestinian areas and the rest of the world. Jordan, however, has apparently chosen to ignore this arrangement and has adopted a different set of policies for Gazans. Any Palestinian born in Gaza or born to a parent from Gaza is considered by Jordan to be a Gazan Palestinian and required to get special permission; they are assigned a blue bridge card to distinguish them as Gazans. West Bank Palestinians are granted green bridge cards. A yellow bridge card is issued to Palestinians holding Jordanian citizenship.

Palestinians from Gaza, regardless of whether they live in Gaza or in the West Bank, must apply to the Jordanian Interior Ministry for an entry permit by sending an application via a designated express delivery service and then wait for an electronic response — in recent months, usually a rejection. Gazans living in Gaza who are unable to use the Rafah crossing need Jordan's approval to enter the country before they can apply for a permit from Israel to transit its territory to get to the King Hussein Bridge.

Students, professionals, businesspeople or others planning family visits to Jordan or abroad were suddenly denied approval beginning in the summer of 2015. The virtually across-the-board rejections from this undeclared Jordanian policy have left tens of thousands of Palestinians living in the West Bank essentially imprisoned there, unable even to go to Gaza.

“Plans are being prepared by activists for a public campaign against the travel ban,” said Abdel Rahman, who along with Muhaisen says the Ramallah-based Palestinian leadership has not done anything about the discrimination against Palestinians of Gazan origin.

Palestinian officials say they are following up on the problem, but also note that Jordan is a sovereign country that has the authority to decide who is allowed to enter its territory. Palestinian Prime Minister Rami Hamdallah told Al-Monitor in April, “We are in constant touch with our Jordanian partners, and we have excellent cooperation at all levels.”

Azzam Shawwa, head of the Palestinian Monetary Authority in Ramallah and of Gazan origin, told the Gaza-based Sawa news agency on Aug. 23 that the problem facing Gazans has been resolved by Jordan. There is no evidence, however, of any resolution. Shawwa did not respond to attempts by Al-Monitor to obtain clarification.

Freedom of movement is a frustration Palestinians have had to deal with for decades. Most would accept travel restrictions on certain individuals for security reasons, but it is difficult to believe that the rejection facing hundreds of Palestinians of Gazan origin, such as Muhaisen, is for security reasons. It appears these Palestinians are being collectively punished for the simple reason that they were born in Gaza or have Gazan ancestors.