Gazans abroad eager to visit, but unready to move home

Although the burgeoning reconciliation between Hamas and Fatah has given hope to thousands of Palestinians, Gazans abroad remain cautious about resettling in the Gaza Strip. 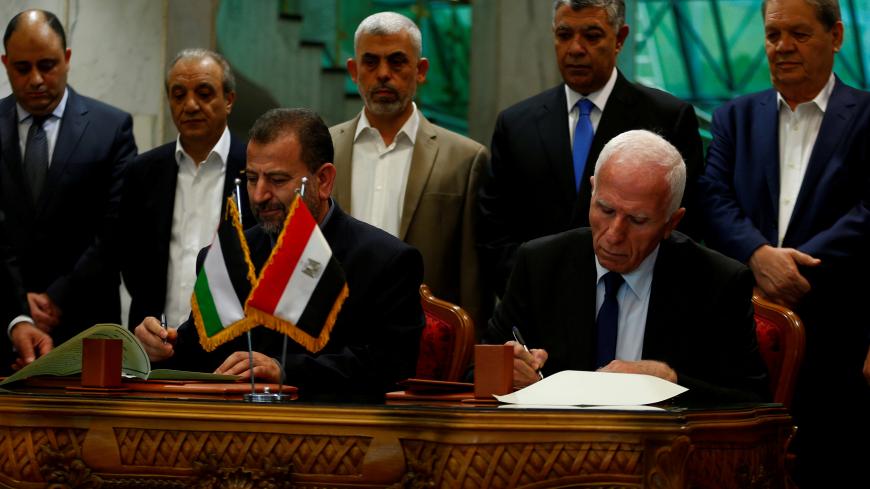 The tens of thousands of Palestinians from Gaza who have been living abroad for decades are looking forward to returning — but are not sure if they are ready to go back for good.

Wafa’a Abdel Rahman, a leading Gaza activist living in the West Bank, told Al-Monitor that she is cautiously optimistic about the Palestinian reconciliation and is excited to visit. “We can now say that we have reached at least an agreement to manage the division, but it will take a couple of years for people to be sure that we are on the right track in Gaza.”

After years of broken promises, it appears that the Islamic Hamas movement has accepted the conditions of the Ramallah government to reunite both West Bank and Gaza into one entity, one law and one government.

Abdel Rahman, who manages Filastiniyat, a women-led nongovernmental organization in Ramallah, says that the approximately 50,000 Palestinians from Gaza living in the West Bank will be among the first to visit the Strip, but that Israel will have to ease the permit protocols. She noted, “Going to Gaza from the West Bank is not a Palestinian issue. Unfortunately, we are still under occupation and the occupiers are the ones who regulate our lives and our ability to travel, including between the West Bank and Gaza.”

Majdi Abu Zaid, the director general of AMAN, a coalition for accountability and integrity based in Ramallah, told Al-Monitor that most Gazans who live in the West Bank would love to visit Gaza, but have already established themselves with careers and families that it would be difficult to return to live there. She said, “I love Ramallah and I have no interest in returning to live in Gaza, although many of us are dying to visit if we can.”

Abu Zaid says that some Gazans have not integrated, especially those who are being persecuted for being supporters of dismissed Fatah leader Mohammed Dahlan, who is a rival of President Mahmoud Abbas.

She hopes that the reconciliation will ease the ability of Gazans living in the West Bank to travel abroad via Jordan. Part of the reconciliation agreement is permitting the presidential guards' return to Rafah, which will ensure the permanent reopening of the crossing point with Egypt.

Even if they reside in the West Bank, Gazans need a special permit from Jordan prior to travel to or through Jordan, a major obstacle. “There is nothing more frustrating for me when I travel than having to wait on the Jordanian intelligence to issue me what is called the ‘no objection permit’ because I carry a blue card that is given to Palestinians of Gazan origin,” Abu Zaid lamented.

Ayman Bardawil, who has lived in Ramallah, Amman, Doha and Tunis since leaving Gaza to study at Birzeit University in 1992, expressed his passion to visit Gaza: “For a while, I cut down on communications with family and friends in Gaza because it makes me angry that I can’t visit them and they can’t visit me,” Bardawil told Al-Monitor by email. He went on, “Of course, I look forward eagerly to go to Gaza if I can, but I will go to visit, since my life has been settled outside of Gaza.”

Plans to return to Gaza are also conditional on improvements in quality of life and governance there. Abdel Rahman expressed her concerns about the status of women in Gaza as well as how the decadelong division will be healed. She said, “There is a lot of psychosocial work that is needed to overcome the trauma of the last 10 years. This is especially important for women who have suffered a lot during the rift and the rule of Hamas.”

While most Gazans are unlikely to go back to live there, it is expected that a number of Palestinian government employees will be among the first to go. Abdel Rahman expects public service employees and investors to make up the largest number of people going to live in Gaza. “While it might take a year or two for the reconciliation to prove permanent, I expect many public servants and security personnel to go to Gaza. Also, I am sure investors eyeing the tourism potential and the possibility of investing in offshore gas exploration will top the list of groups going to live in Gaza,” Abdel Rahman noted.

The Palestinian reconciliation, which is still in its infancy, is providing cautious optimism to Palestinians inside and outside the Gaza Strip. The 10 years of division have left deep wounds that will take years to heal, and the brain drain that was caused by the split will not be easily reversed, no matter how well people are reassured that the dark years of the past will not be repeated. For the time being, Palestinians are crossing their fingers and hoping that Gazan and West Bank unity will take root and that the movement of people and goods within the two enclaves and the outside world will no longer be hindered by internal conflicts.