Egypt, Israel, Jordan and Hamas-run Gaza are all restricting the entry and exit of Palestinians from their territories. 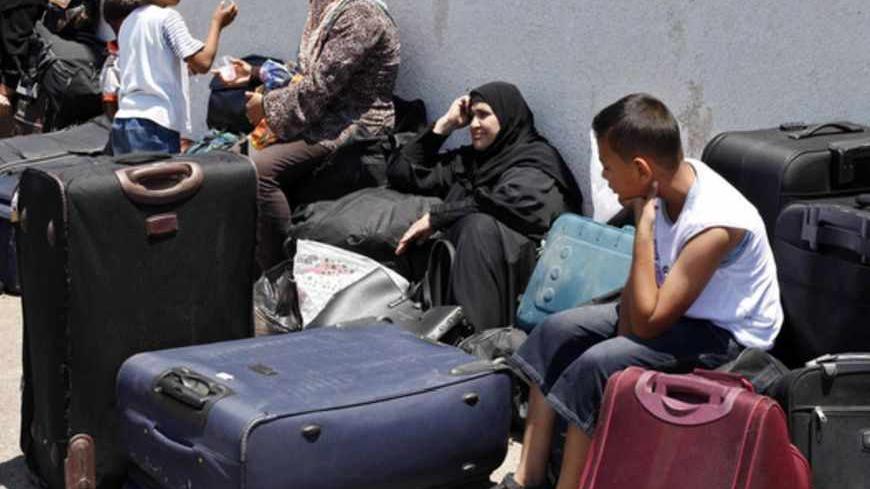 Palestinian passengers wait to cross into Egypt at the Rafah crossing in the southern Gaza Strip, June 24, 2013. - REUTERS/Ibraheem Abu Mustafa

A rather underreported issue about the way Palestinians are treated is emerging. Countries that control borders through which Palestinians need to travel act as though they were the guardians for what they deem best for Palestinians. Four different bodies today are using their powers to limit the movement of people and goods from and to various Palestinian territories. Ironically, the Ramallah-based Palestinian government is not one of them.

While travel restrictions refer to both entry and exit, what is strange is that these four powers use this control to prevent people from exiting without actually accusing them of anything. Such arbitrary decisions are often made under the pretext of being in the best interest of the people that they are restricting. When it comes to freedom of travel, the four key groups who have appointed themselves the guardians for Palestinians are the Hamas government, Egypt, Jordan and Israel.

The Haniyeh government, which continued in power despite being sacked by President Mahmoud Abbas, has caused the exodus of the European supervisors from the Rafah crossing point. With the Europeans gone, the Gaza-based government has taken over the crossings on the border with Egypt as well as with Israel and used this newfound power to restrict the exit of people, particularly if the government does not approve of where they are going or what they plan to do. This is most evident when the issue is understood in connection with the ongoing split between Fatah and Hamas and the internal power struggle within Hamas.

Jordan is also playing a guardianship role in the way it administers the King Hussein Bridge. Palestinians from Jerusalem going in or out must have a special Israeli permit. Jerusalemites with dual citizenship or other travel documents are not allowed to enter or exit via the King Hussein Bridge. The reason given is that Jerusalemites not using the permit might eventually lose their residency in Jerusalem. Palestinians have accused Israel of using administrative means to ethnically cleanse east Jerusalem of its Arab population. Jerusalemites who travel regularly and have the necessary re-entry visa to Israel say that this fear is exaggerated and doesn’t apply to them.

Israel also uses its travel policies to restrict Palestinians or their guests. While the major problem lies in Israel not granting entry to the Palestinian areas through the borders it controls (the King Hussein Bridge and the Erez checkpoint near Gaza), the Israelis also prevent Palestinians from exiting. Palestinians typically have no idea if they are not allowed to travel until they actually get to Israeli passport control. The guardianship, however, is most clear when it comes to the way Israel deals with Palestinians from east Jerusalem. While clearly discriminating against them when it comes to housing, employment and city taxes, Israel restricts the entry of east Jerusalem residents to parts of the West Bank and all of Gaza under the claim that they are Israeli residents and therefore might be prone to "kidnappings" by Palestinian militants. At difficult times, Palestinians were denied entry to Bethlehem unless they could prove that they have homes and present utility bills in their names.

Egypt has been the latest power to enter into this false guardianship role toward Palestinians and their guests. It is unclear how these decisions are made by the Egyptians. Initially, and especially during the Mubarak era, it was thought that they were often made based on an unwritten understanding with the Israelis. This issue has continued in regard to the entry of goods into Gaza over claims that this will destroy what is called the "customs envelope," which dictates the custom fees as agreed upon in the Paris Economic agreement between Israel and the Palestinian Authority.

The policy of controlling the borders from one side has continued under the Morsi administration. On June 23, Egyptian authorities refused to allow an international media delegation entry into Gaza, even though their visit was coordinated beforehand with the Egyptian and Gaza authorities. The Egyptian justification for the ban was the fear that the Rafah borders might be closed in the days prior to or on June 30. The argument was that if such a closure occurs, the Egyptians didn’t want to have foreigners "stuck" in Gaza.

On their own, the Egyptian authorities, like other powers, are performing a sort of guardianship of Palestinians and their guests. It appears that the issue of Palestinian independence does not rest solely on Israel, but must also be recognized by all of Palestine’s neighbors.