As secretive Palestinian-Israeli negotiations continue, the final status of Jerusalem remains the thorniest of issues. 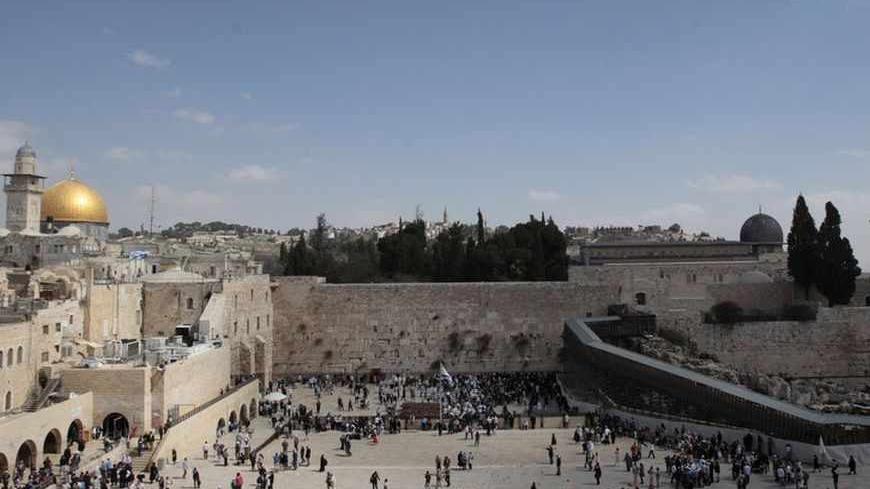 The Dome of the Rock (L), the Western Wall (C) and the Mughrabi Gate (R) entrance to the compound known to Muslims as al-Haram al-Sharif, and to Jews as the Temple Mount, are seen in Jerusalem's Old City, March 7, 2011. - REUTERS/Baz Ratner

The near secret negotiations taking place in Jerusalem and an undeclared West Bank city are expected to cover the five final status issues that are the source of the Palestinian-Israeli conflict. In Washington, both sides agreed that borders, security, settlements, refugees and Jerusalem will be fully discussed during the talks mandated to last at least nine months.

While borders and security are priorities, it's believed that the hardest issues, among them Jerusalem, will be delegated to the latter part of the negotiations. By delaying discussion on Jerusalem, it's possible that the Israeli and Palestinian negotiators will agree to tackle borders without Jerusalem being included within those borders, thus supporting the theory and statements by both sides that the holy city will remain undivided.

There are at least three major components that need to be dealt with regarding Jerusalem: the holy sites, the residents and certain neighborhoods. When discussing the holy sites, most people focus on the walled Old City. This one square kilometer, which in 1981 was declared a World Heritage Site, includes sites holy for Christians, Jews and Muslims. The Church of the Holy Sepulchre, the Via Dolorosa and other locations connected to the Christian faith are not expected to be a cause of much controversy. The site of the Islamic Haram al-Sharif and the Jewish Western Wall, which are physically connected, will be the hardest issue.

At one time during the Camp David II talks, US President Bill Clinton is said to have suggested sharing this sensitive site, with the Palestinians controlling the area that includes al-Aqsa Mosque and its courtyards, while Israel oversees areas beneath it — a reference not only to the Western Wall, but to the location where Israelis believe the ruins of the historic Temple to be.

Since al-Aqsa is the third holiest mosque in Islam, the fate of the Haram al-Sharif and the sensitivities surrounding it appear to have an importance beyond what the Palestinians alone can address. When the Camp David talks dealt with Jerusalem in a way that displeased Yasser Arafat, late chairman of the Palestine Liberation Organization, he called the leaders of Jordan, Saudi Arabia and Egypt to ask if they would agree to compromise. Of course, they responded in the negative. Jordan actually inserted a clause in its peace agreement with Israel stating that Amman will have a role in deciding the future of Islamic holy places in Jerusalem. More recently,Jordan's King Abdullah II and Palestinian President Mahmoud Abbas have signed a cooperation agreement expanding the role of the Hashemite kingdom in negotiating the future of the city's holy places, both Islamic and Christian.

The status of Jerusalem’s Palestinian residents also poses a difficult problem. Ever since the Oslo Accords were signed, the Palestinian Authority has been allowed to issue passports to Palestinians in the areas occupied in 1967 with the exception of Jerusalemites. Palestinians in East Jerusalem are given permanent Israeli residency, but most are not citizens of any country. Since Jordan would be the last recognized country for them, Palestinians from East Jerusalem carry Jordanian passports but without having a national ID. In other words, Jerusalemites are not citizens of Jordan even if they carry that country’s passport.

Similarly, Israel gives East Jerusalemites a travel document referred to as a laissez passer, which indicates that the carrier’s nationality is Jordanian. This document allows Jerusalemites to cross Israeli borders, usually at an airport. While Israel allows Palestinians to exit the West Bank using it at the King Hussein Bridge, the Jordanians refuse to allow anyone using it to enter Jordan. Instead Palestinians are expected to cross into Jordan using an Israeli-issued identity permit, which has become quite expensive.

A Jerusalemite wishing to cross into Jordan by bridge must pay 392 shekels ($120), which makes travel through Lod Airport preferable. Any final agreement will have to decide whether Palestinians in Jerusalem are Palestinian, Israeli or Jordanian citizens. They cannot continue to be treated as stateless people after an agreement on all other issues has been reached. The Palestinian population of East Jerusalem is now at around 370,000, depending on where one considers the borders of the city to be and whether one includes Jerusalemites who do not possess an Israeli-issued ID card.

If one assumes that the issue of the Old City of Jerusalem is somehow settled, the third area requiring resolution is the status of the remaining areas of East Jerusalem. What complicates this situation is that a large number of Jewish settlements have been built there since 1967. One idea discussed at Camp David II that became part of the Clinton parameters is having the Arab neighborhoods belong to Palestine, while the Jewish settlements become part of Israel.

Without a wall or other division of the city, it will be difficult to parcel out the different areas in a city that has been forcefully (but not successfully) mixed. The idea that the city will be part of a single security envelope to avoid the wall will not address the many administrative and municipal questions that will arise. Over the past 20 years, Israel has prevented Palestinians in East Jerusalem from having a direct connection to the Ramallah-based Palestinian government.

Last spring, the Israelis issued an order to stop a children’s puppet festival from taking place in the Palestinian National Theatre because the festival’s Norwegian funding was channeled through the Palestinian Authority in Ramallah. The Orient House and the Palestinian Chamber of Commerce have been closed for years based on Israeli emergency laws. The annexation of East Jerusalem to Israel, which has not been recognized by any country in the world, has failed to resolve some of the administrative issues that concern the lives of the city’s Palestinians.

The issue of Jerusalem, more than any other, was probably the main reason for the failure to reach an agreement in 2000 and will likely derail the current talks unless there is a fundamental change in the way both sides view the future of the city and its population.