Senior clerics and scholars debated at a Jordanian conference whether to lift the ban on Arabs and Muslims visiting Jerusalem. 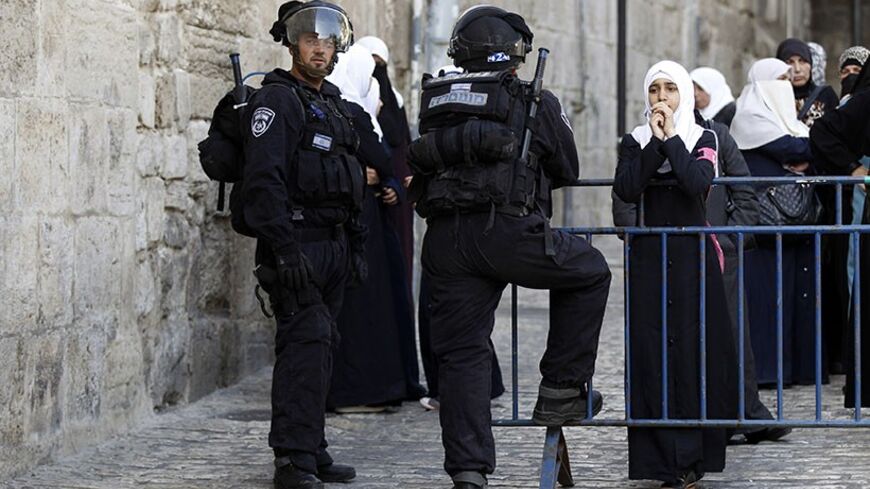 The dangers facing Jerusalem and the Al-Aqsa Mosque finally appear to have elicited serious Arab reactions. The guests and comments of the organizers of a recent conference held in the Jordanian capital of Amman reflect a newfound seriousness.

"The Road to Jerusalem" — held April 28-30 and organized by the World Islamic Sciences and Education University and Jordan’s Palestine parliamentary committee — tackled some hard issues never before confronted. The seriousness of the discussion was best conveyed when Jordan's Prince Ghazi bin Mohammad, King Abdullah’s right-hand man on religious issues (including Jerusalem), convened a private meeting, without the press in attendance, with delegates from Palestine and the Arab world.

Leaks from that meeting indicate that Ghazi described the seriousness of the situation, in particular in regard to the Hashemite pledge to protect and defend the Haram al-Sharif, the site of Al-Aqsa, and Jerusalem in general. Jordan’s unique role in Jerusalem is codified in Article 9 of the 1994 Israel-Jordan peace treaty and in a special Jordanian-Palestinian agreement signed by Palestinian President Mahmoud Abbas and King Abdullah in March 2013.

Israeli incursions into the Al-Aqsa Mosque compound have become an almost daily event, reflecting an effort to chip away at the status quo that has held since 1967. Israel had respected Muslim control over its third holiest site by allowing unarmed guards, paid by the Jordanian Ministry of Awqaf, to protect the site and regulate visits by non-Muslims to it. Israel has retained control over one gate, the Mughrabi Gate, which is connected to the area of the Western Wall by a controversial bridge. Militant Jews have increased unauthorized visits to the mosque area through that gate while under heavy protection by the Israeli army.

In Amman, high-ranking delegates, including Muslim and Christian leaders from Jerusalem as well as well-known Islamic scholars, debated for the first time whether visits to Jerusalem by non-Palestinians are acceptable while the city remains under occupation. Mohammad Hussein, the mufti of Jerusalem, and others echoed a statement regularly made by Abbas, calling on anyone who is able to visit to do so. Abbas regularly says that visiting a prisoner is a victory for him, not normalization with his prison guards.

In a speech, Ghazi rhetorically asked what would happen if one million Muslims from Turkey, Indonesia and Jordan — countries whose citizens technically are allowed to travel to Israel — were to visit Jerusalem. Egyptian religious scholars gave a detailed religious edict justifying such visits.

The conference participants were moved by a powerful speech delivered by Yehiya Soud, the firebrand Jordanian member of parliament who heads the Palestine parliamentary committee. Soud said that although he holds a diplomatic passport, he was held for five hours at the King Hussein Bridge by the Israelis before being allowed entry. Despite the harassment, Soud said, he will go again and encourages others to go as well.

Islamic scholars from Qatar, Yemen and Morocco vehemently disagreed, arguing that all visits to Jerusalem while under Israeli occupation and using Israeli-issued visas are unacceptable and legitimize the occupation. The Arab Peace Initiative, supported by the Organization of Islamic Cooperation, prohibits any normalization with Israel until it withdraws from Arab areas it occupied in 1967. In the background of much of the discussion was the fatwa by the prominent Egyptian cleric Yusuf Qaradawi against visits to Jerusalem while under occupation.

The discussions in the conference halls were reflected in public debates outside their walls. One local radio station, Radio al-Balad, conducted a survey of average Jordanians and dedicated a radio program to the issue of visiting Jerusalem. The discussions appeared to reflect a change in attitude toward accepting the idea that visiting the city should be made an exception to the assestion that any visit to Israel is wrong and represents normalization.

While the conference was underway in Jordan under the patronage of King Abdullah, a similar event was being held at the Muqata in Ramallah. Addressing the conferees on the need to establish an endowment for Jerusalem, Abbas gave an impassioned speech broadcast live on Palestine TV, reiterating the importance of Jerusalem and berating Arabs and Muslims for paying lip service to Jerusalem but failing to fulfill their pledges of financial assistance. The Palestinian president reflected on the difficult economic situation of his government, but then said that the presidency would nevertheless contribute $1 million of its budget to the newly established endowment.

It finally appears that Arab and Muslim efforts involving Jerusalem are becoming serious, although still relatively humble when compared to those of the Israelis and Jewish organizations in Jerusalem. Unless a more serious and comprehensive effort is launched, attempts to save the Arab presence in Jerusalem might be too little too late.