The rosy picture that US and Israeli officials are trying to portray at the World Economic Forum is viewed skeptically by a grieving couple who were unable to see the wife's dying mother. 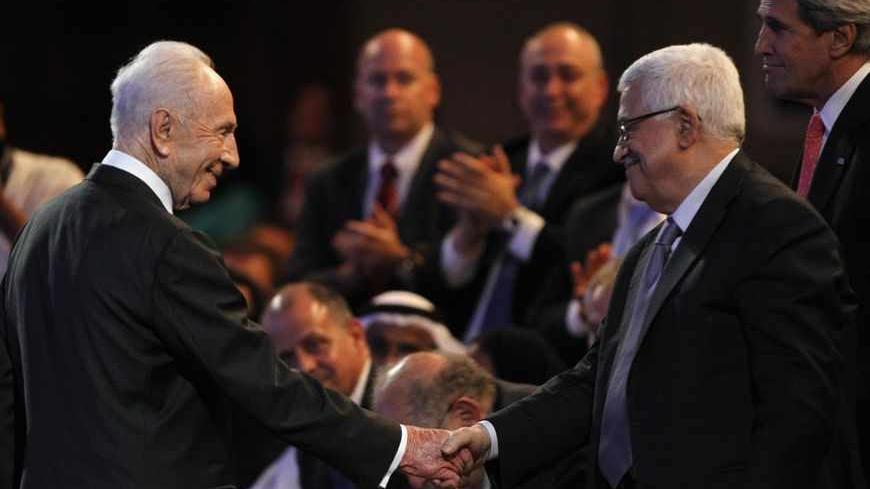 Israeli President Shimon Peres (L) shakes hands with Palestinian President Mahmoud Abbas as US Secretary of State John Kerry (R) looks on, during the World Economic Forum on the Middle East and North Africa at the King Hussein Convention Center, at the Dead Sea, May 26, 2013. - REUTERS/Muhammad Hamed

On the same day as the World Economic Forum was holding its dramatic closing session with back-to-back speeches from President Mahmoud Abbas, Israeli President Shimon Peres and US Secretary of State John Kerry, I was mourning the passing of a dear friend's mom.

Abbas reiterated the Palestinian government’s total commitment to peace and security, practically begging the Israelis to allow his local police to receive the small shipment of arms that has been rotting in Jordan for years. Peres, the president without much power, contradicted his own prime minister by embracing the Arab Peace Initiative and begging the Palestinians to come to the negotiating table, where they are bound to be surprised.

Finally, Kerry sounded even more desperate to see through some change in the Middle East’s most intractable conflict. One of his solutions is to throw money at the Palestinian-Israeli impasse. Kerry waved $4 billion to the Palestinians, money he said he has received in investment commitments from Japanese, European and others (not clear how much from the United States).

To be fair, after Kerry repeated his financial offer, which he said both Israeli Prime Minister Benjamin Netanyahu and Abbas supported, he said that an economic peace should not replace a political peace process.

Big money or a political process have lost their bite when it comes to Palestinians who have lost any confidence in politicians and are more interested in day-to-day issues like easing the travel restrictions.

This brings me to a personal story that was unfolding parallel to the World Economic Forum.

It is the story of Benaz Batrawi, a Palestinian from the Gaza Strip who while studying at Bir Zeit University in the 1990s married a Ramallah-based student, Walid Batrawi. At the time it was relatively easy to change your address on the Israeli ID, and she made the change to live permanently in Ramallah. Benaz worked with me for some time before turning to freelance journalism training.

Last Monday [May 20], Benaz’s mother, who has been suffering for some time from cancer in Gaza, became extremely ill. Her husband, Walid, who works with an international media organization, applied for her to visit her dying mother. For four days the permit request was being considered by the Israelis.

At one time an Israeli military official told the family that it takes time to get a permit to see a sick person while a request for a funeral is issued on the same day. And that is exactly what happened; by Friday morning news came that  Benaz’s mother, 63-year-old Mazina, had died. Within a few hours, Walid was able to secure her a permit after presenting the death certificate.

I called Walid to pay my respects and asked what he thought of the declarations of the politicians at the Jordan side of the Dead Sea. His response was to recall a similar problem years earlier when the United States again tried to solve a problem by throwing money at it. Walid was working for a USAID contractor with an assignment to help empower the new Palestinian legislative council at the time.

One of the problems they were facing then was the fact that Israel was barring some legislator from Gaza from traveling to Ramallah to participate in workshops. So instead of putting some pressure on the Israelis to ease the travel of the Palestinian MPs, USAID invested some $140,000 on videoconferencing equipment.

Walid gave a more current example in which USAID is planning to fund a bridge near the Qalandia checkpoint to ease traffic at this important Ramallah-Jerusalem juncture. “Instead of a bridge, the Americans should be putting their efforts on getting rid of the checkpoint,” Walid said in frustration. He added: “Unless they expect this checkpoint to stay where it is for ever.”

Kerry’s proposal of investing a whopping $4 billion as part of what Netanyahu said was a plan to introduce an economic peace  even if the American diplomat insisted that this will not be on the account of the peace process.

Palestinians like Walid and Benaz Batrawi are skeptical that this effort will produce a lasting result; on the contrary, they worry is that it will embolden the Israeli  as they can go on for even longer allowing the international community to pay for their illegal occupation.