Why is Jordan restricting Palestinians' travel?

Palestinians have been fighting repressive Israeli travel restrictions for years, now they face Jordanian ones too. 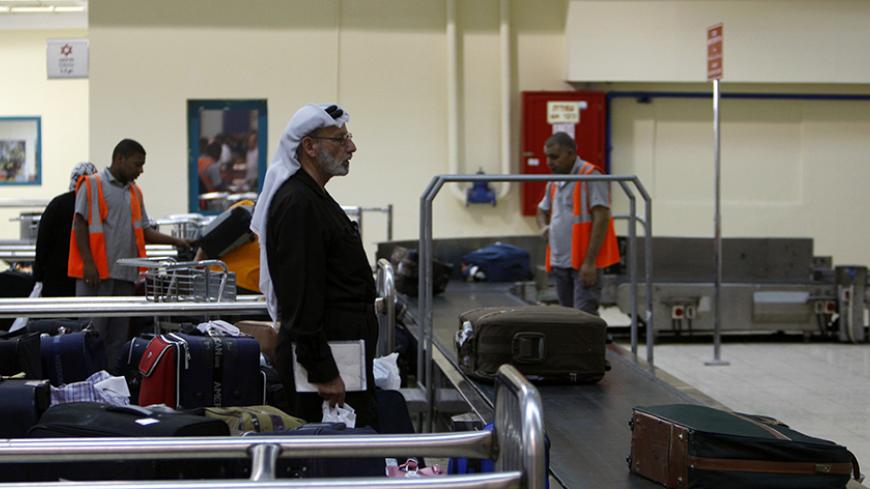 A traveler waits for his luggage at the King Hussein Bridge Crossing, July 9, 2009. - REUTERS/Ammar Awad

Like so many accomplished students, Benaz Someir, a Palestinian from Gaza, chose to attend Birzeit University.

While pursuing her degree in journalism, Benaz met and later married Walid Batrawi, a fellow BA journalism student from Ramallah. For family and professional reasons, Benaz, a resident of Khan Yunis in Gaza, requested and was given permission to change her residency to the West Bank.

Having successfully convinced the Israelis to change her residency to the West Bank, Benaz was now able to travel to different parts of the world using the King Hussein Bridge, which was easier than returning to Gaza. The choice was hard, but Benaz felt that it was best for her and her career as a media trainer and for her new family in Ramallah.

That decision was made more than 20 years ago. But despite being married to a Palestinian and having proper residency in Ramallah for two decades, Benaz is being treated by Jordanian border control officers as a Gazan. Like all other West Bank and Gaza residents, Benaz holds the same Palestinian passport, yet she is treated differently than her husband.

However, since the 1993 Oslo Accords, this changed, and all Palestinians have the same passports. Nevertheless, Palestinians deemed by Jordan as Gazans (namely, if they were born in Gaza or are children of Gazan parents) must apply for a special permit called an adam mumanaa — a no-objection document — issued by the Jordanian Ministry of Interior.

This is costly, nonrevocable and time-consuming. The process takes weeks and sometimes months without any clarity of the rules.

Despite this inconvenience, most Gazans with a legitimate reason to travel are granted this permit — until recently.

Wafa Abdel Rahman, founder/director of Filasitynat, a leading women’s nongovernmental organization, is also a Gazan who has been living in the West Bank for decades. Abdel Rahman told Al-Monitor that the Jordanian authorities have in the past three months almost completely stopped approving these coveted permits. “They have turned down almost every application without any explanation or justification.”

Abdel Rahman, who married a Jordanian citizen, was able to make it to Jordan this week and has launched a series of meetings with Jordanian parliamentarians and government officials. She has also been speaking in the media about the problem.

“Living in Ramallah as a Gaza-born means you are stuck, you can’t return to see your family in Gaza, and now you can’t travel outside the West Bank for work or pleasure,” she told Al-Monitor.

Students, workers, individuals invited to conferences and businesspeople are among the many types of people who have been unable in recent months to obtain permits to enter Jordan, said Abdel Rahman. She estimates that about 50,000 Gazans are now residents of the West Bank.

Palestinian Prime Minister Rami Hamdallah told Al-Monitor that the Palestinian government is pursuing the case of Gazans with their Jordanian counterparts. “We are in constant touch with our Jordanian partners, and we have excellent cooperation at all levels,” he told Al-Monitor.

Abdel Rahman and others affected are not convinced of the ability of Ramallah to do anything and have created a movement called Haraka with the express goal of pursuing “the freedom to the right to travel and to choose your residency.”

While in Amman, Abdel Rahman joined forces with a group of Gazans living in Jordan who also face different kinds of discrimination in work and employment. They will meet with senior Jordanian officials to seek a change to the current policy.

Jordanian sources are extremely quiet on the subject. A reliable security source told Al-Monitor that in Jordan the bridge policy is a “sovereignty issue” and is considered a red line not open for discussion. The problem is further complicated because Jordan is trying to organize its huge migrant population and deal with the international pressure to allow Syrian refugees to work in Jordan. Syrian refugees have been recently allowed to take up jobs in Jordan, and thus the opportunity for Jordanian workers is narrowing. The concern (although unsubstantiated) is that somehow if Gazan Palestinians make it to Jordan, they will drive unemployment among Jordanians even more.

Abdel Rahman told Al-Monitor that some Jordanian officials have indirectly hinted that some Gazans come to Jordan and never left.

The lukewarm relationship between Ramallah and Amman has also meant that there are few top-level meetings between Palestinian President Mahmoud Abbas and King Abdullah during which such sensitive issues could be dealt with.

This week, Benaz was invited to a family wedding in Jordan. She had to stay in Ramallah while others were able to attend the celebrations because she was unable to obtain the permission that Palestinians of Gazan origin need in order to enter Jordan.

For years, Palestinians have been fighting repressive Israeli travel restrictions. But for Palestinians who have fought and succeeded in finding an alternative by moving to the West Bank, to get restricted now from traveling by a nearby Arab country is hard for many to fathom. What is further frustrating is that they are being discriminated against based on their birthplace, even though they carry the same passport as their fellow Palestinians.