Will 1967 Palestinian refugees ever return?

The Egyptian-Israeli peace treaty may have been good for the two parties, but it has also been used to prevent Palestinians displaced in 1967 from returning to their homes. 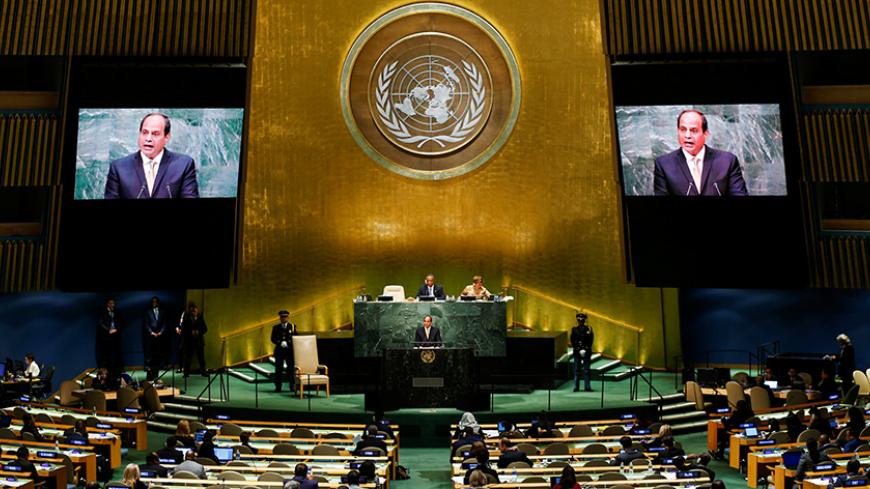 In a speech to the UN General Assembly on Sept. 20, Egyptian President Abdel Fattah al-Sisi suggested that Israelis and Palestinians learn from the “wonderful example” of the peace between Israel and Egypt. Indeed, the peace treaty signed in 1979 between Israel and the world’s most important Arab state was joyous news for both sides. This wonderful example, however, also constitutes a grim chapter in the tragic annals of some quarter of a million Palestinians who were dispossessed of their homes in 1967 and whose lands are now being farmed by strangers.

Egypt has been a bitter disappointment to hundreds of thousands of Arab people, specifically, the Palestinians uprooted from their homes in the West Bank, the Gaza Strip and East Jerusalem in the June 1967 Arab-Israeli war. Some 250,000 people, a quarter of the territories’ residents at the time, many of them refugees from the 1948 war, were forced into refugee camps in neighboring Arab states (in addition to some 100,000 Syrian refugees from the Golan Heights). Egypt sold them out for a song.

In the Camp David Accords (1978), Egypt committed to establishing a standing committee — along with Israel, Jordan and a self-governing administration from the territories — that would formulate principles for the return of “persons displaced from the West Bank and Gaza in 1967.” This was made contingent on adopting “necessary measures to prevent disruption and disorder.” To be clear, this obscure article does not apply to the issue of the refugees from the 1948 Israeli War of Independence, the resolution of which was put off to eventual negotiations on a permanent settlement to the Israeli-Palestinian conflict — in other words, until the coming of the Messiah. Not only that, in 1948, the rationale for prohibiting the return of Palestinian refugees to their homes had been the desire to limit the number of non-Jews in the nascent, sparsely populated State of Israel. Since 1967, uprooted Palestinians have been denied the right to go back to places that are not even under Israel’s territorial sovereignty.

The “continuing committee,” as termed in the 1978 agreement, became a mechanism for avoiding implementation of UN Security Council Resolution 237 (1967), which calls for Israel to allow the residents of the territories who had fled at the start of the fighting in early June 1967 to return home. Fifteen years later, the problem of those uprooted in 1967 was inserted in the Israeli-Palestinian Oslo Accords, signed in September 1993.

At a Knesset debate in January 1995, Michael Eitan, a Likud moderate, warned against a loophole that would allow Palestinians uprooted in 1967 and their descendants — some 800,000 people in all — into the Israeli-controlled territories. Deputy Foreign Minister Yossi Beilin explained, “[We] simply copied the exact same sentence that appears in the Camp David Accords, which talks about a quadripartite committee to determine the parameters for the return of the displaced.” Prime Minister Yitzhak Rabin's government and all those that followed adhered to the same tradition of sitting on its hands on this issue.

Unlike Prime Minister Benjamin Netanyahu’s imaginary “ethnic cleansing” of settlers from the West Bank, the refugees uprooted in 1967 are a wonderful example of real ethnic cleansing. In "The Bride and the Dowry: Israel, Jordan, and the Palestinians in the Aftermath of the June 1967 War," the Israeli historian Avi Raz, from Oxford University, describes at length how Israeli soldiers used megaphones and radio broadcasts to tell Palestinians to leave their homes immediately, shooting above their heads to hurry them along. Some 20 towns and villages along the Green Line (delineating Israel and the West Bank) were partially or completely destroyed, and many of their residents headed east, across the Jordan River. In Jerusalem’s Old City, the Mughrabi Quarter, home to 650 Arab residents living in 130 houses adjacent to the Western Wall, was razed. Hundreds of uprooted Palestinians who tried to secretly cross the Jordan to get back to their homes were shot dead. After international protests and American pressure, Israel conceded to the request of 14,000 of the 170,000 uprooted Palestinians to return to the West Bank.

What happened to the 1967 refugees is not only a wonderful example of the injustices of the Israeli occupation and its violation of international law, but taking their land also makes a mockery of the occupation laws that Israel itself has implemented in the territories. A 2005 report by the state comptroller general includes a warning by the office in charge of abandoned property in the territories against handing over private Palestinian lands, including those of absentee owners, to Jewish settlers. The comptroller cites an opinion by the deputy attorney general underscoring that Israel is simply a “guardian protecting the property lest it be damaged while the owners are absent from the area.” He stressed that Israeli authorities “must not conduct any deal pertaining to the property that contradicts said protection obligation, and especially [their] duty to hand back the property to its owners once they return.”

In this regard, the wonderful example reaches truly Orwellian heights in the current push by elected Israeli officials to bypass the absentee ownership law by passing the so-called Regularization Law, which would retroactively legalize unauthorized Israeli outposts in the West Bank, specifically the Amona outpost. The authors of the proposed bill argue that it is designed to “prevent a moral, human and social travesty that would be caused by the evacuation of hundreds and thousands of [Jewish] families that built their homes with the support of successive Israeli governments.” This is not only an attempt to prevent the evacuation of the settlement homes of Amona, erected on private Palestinian lands. The proposed bill also states, “If, one of these days” — in other words, at another stop on the Messiah’s journey — Palestinian landowners return to the territories, they would receive compensation such as that paid to the private landowners who remained in the West Bank and on whose lands settlements were erected. Real ethnic cleansing, with a price tag.

US President Barack Obama referred this week to the settlement issue at his last speech to the UN General Assembly on Sept. 20. He called on Israel to recognize “that it cannot permanently occupy and settle Palestinian land.” Once he leaves office, Obama will have time to tour the West Bank. He should invite Sisi to join him. They will have an opportunity to see up close that it is possible to conquer and occupy for 50 years and still be going strong. Afterward, they should pop into one of the refugee camps housing the uprooted of the 1967 war on the other side of the Jordan River. They will have an opportunity to meet human examples of a wonderful peace.