If, as Israel claims, its actions in the West Bank are lawful, why is the US administration fighting the Palestinian effort to have the matter heard at the International Criminal Court? 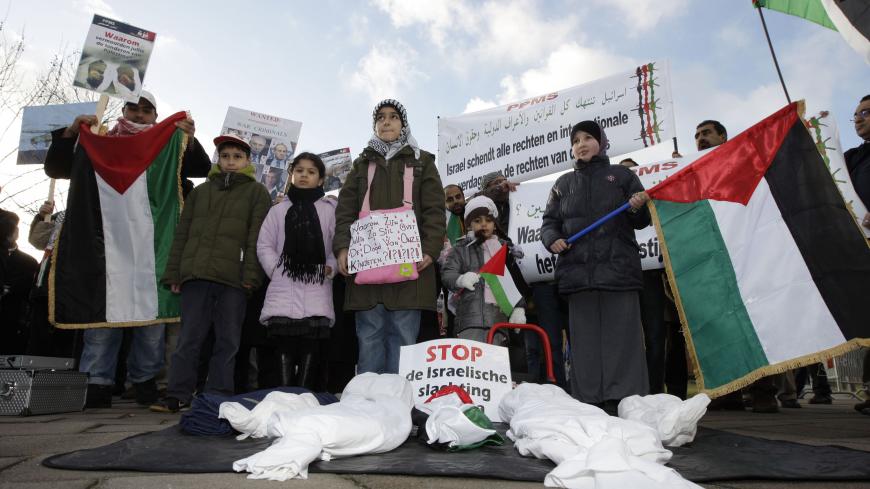 It's hard to fathom why the US administration rushed to Israel’s defense against Palestinian urging for Israeli officials to be prosecuted in the International Criminal Court. Successive Israeli governments claimed that all their activities in the territories conquered in the June 1967 Arab-Israeli war were strictly kosher. According to the Israeli Foreign Ministry, the West Bank is a "disputed" area, not an occupied one. Therefore, anything that Israel did and does in the territory is perfectly legal. So what lit a fire under the administration and Congress when Palestinian President Mahmoud Abbas threatened to demand that the ICC in The Hague investigate Israel’s activities in the occupied territories? Why did Secretary of State Rex Tillerson warn Nov. 17 that unless Abbas withdraws this threat, the administration will have to close the mission of the PLO in Washington? If Israel is acting lawfully, shouldn't it let the Palestinians go to court and take the chance to prove once and for all that it is not an occupying power and can continue to build its settlements uninterruptedly in the territories?

The closure of the PLO office in Washington to punish the Palestinians is based on a 1994 law adopted by Congress shortly after the festive signing of the 1993 Oslo Accord between Israel and the PLO. Even diehard pessimists did not anticipate at the time that 23 years later, the agreement would serve Israel’s bid to annex 60% of the West Bank (designated Area C) rather than to enable the creation of a Palestinian state there. Few could have believed that the number of Israeli settlers in the West Bank would quadruple — from about 110,000 to over 400,000 and counting.

Even diehard pessimists did not anticipate at the time that 23 years later, the [Oslo Accord] would serve Israel’s bid to annex 60% of the West Bank rather than to enable the creation of a Palestinian state there.

While the White House is working diligently on a new Israeli-Palestinian peace initiative, Israel’s Minister of Housing and Construction Yoav Galant is busy boasting that he's promoting a plan that would double the number of settlers in the Jordan Valley, which forms part of the West Bank. His plan consists of generous incentives to communal farming settlements and kibbutzim that accept new residents. Galant’s blueprint is in complete contradiction to the 2003 US Road Map to Mideast Peace and the ensuing UN Security Council resolution (at the initiative of Republican President George W. Bush), which commits Israel to freezing new construction in the West Bank. Nonetheless, there have been no reports of a US threat to shut down the Israeli Embassy in Washington.

In an interview on Israel's public Kan Radio, Galant said there was “across-the-board agreement in Israel that the Jordan Valley is part of Israel in a future diplomatic arrangement.” This broad consensus includes the left-leaning Labor Party. In June 1992, Health Minister Haim Ramon announced in the name of the Yitzhak Rabin government that in accordance with the party’s platform, Israel would not build or expand settlements “except for the areas of Jerusalem and the Jordan Valley.” The Oslo Accord signed the following year did not disrupt the Israeli policy encouraging Jewish settlement in the Jordan Valley and gradually forcing the Palestinians out. This policy was also implemented under the tutelage of Labor's Prime Minister Ehud Barak and Defense Minister Amir Peretz.

Israel’s policy in the Jordan Valley violates not only international law, but Israel's own laws. The 2005 State Comptroller Report contains unequivocal proof. The report refers to the lands of tens of thousands of Palestinians who fled to Jordan in the 1967 war — many of them forced to do so — and are considered absentee landowners and not refugees. According to the book “Rift in Time” by Palestinian attorney Raja Shehadeh, they number approximately 100,000. According to Israeli geographer Arnon Sofer, in the 2006 “The Future of the Jordan Valley,” the real figure is double that.

The state comptroller adopted the opinion of the legal adviser of Israel’s military administration of Palestinian civilian affairs in the territories that allocating lands of “absentee” Palestinians for Israeli settlements appears unlawful. He argued that the law tasks Israel as custodian of absentee Palestinian property with preserving these properties so that they can be restored to their owners once they return to the West Bank if they can prove ownership.

The former head of the Civil Administration, Brig. Gen. Ilan Paz, confirmed a few years ago in a personal conversation with the author that the office tasked with overseeing absentee property had drawn up a secret list of 100 absentee Palestinian owners from the Jordan Valley. Its original codename was the “list of 100,” but over time an additional 2,000 or so names have been added. Fearing that the owners might sue to get their property back, the Israeli authorities are preventing the entry of these listed owners into the West Bank. Unfortunately for Israel, several thousand Palestinians remained in the Jordan Valley or managed to return to their lands. Some 75,000 refugees (including 15,000 Bedouin living in unrecognized villages) are disrupting Israel’s grand plan to rid the valley of its non-Jewish residents.

Israeli authorities have come up with a variety of ways to encourage the Palestinian residents of the Jordan Valley to move away, including declaring extensive areas “closed military lands,” “nature reserves” or “state-owned lands” to prevent access by the Palestinians. If these tactics are unsuccessful, evictions get the job done. Earlier this month, some 300 Palestinians living in the northern Jordan Valley were served eviction notices. According to data compiled by the UN Office for the Coordination of Humanitarian Affairs, in the first two months of 2017, Israel demolished 24 homes and other buildings in 18 Bedouin communities, displacing 133 people, more than half of them children. The claim, as always, was that they had built their houses without permits. The explanation, as always, was the lack of zoning plans for those communities. Half of the buildings razed were built with funds donated as humanitarian aid.

The Jordan Valley, which comprises about a third of the West Bank territory, is the sole land reserve for the settlement of Palestinians refugees who fled or were forced to leave their homes in the West Bank. The Palestinian Authority's Ministry of Planning has prepared a contingency plan to settle 500,000 refugees in the Jordan Valley. Any US peace initiative that fails to offer a feasible and just solution to the refugee issue is doomed to fail. The Israeli settlement enterprise in the Jordan Valley is not only patently unlawful and a violation of human rights, it also promises to undermine the peace plan the Donald Trump administration is cooking up. When the pressure cooker blows, the PLO office in Washington, as well as other Palestinian institutions, will be superfluous.