The Israeli mayor of Jerusalem is using an extensive Disney-like cable car project to improve his standing with the Likud Party, while the Palestinians publicly oppose his unilateral action. 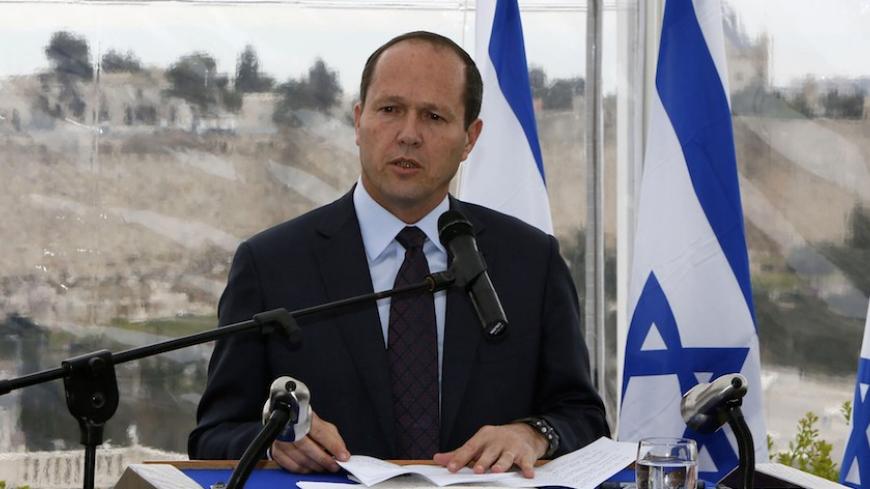 Like many Israeli officials, whenever Nir Barkat, the Israeli mayor of Jerusalem, wants to make a political splash among Israeli voters, he turns to the Palestinian arena, which is the gift that keeps giving. In April 2013, when Barkat was running for a second mayoral term, he turned to the Palestinian sector of Jerusalem to announce an ambitious project to create a cable car route connecting the Mount of Olives to the Western Wall. The goal of the cable car route is to physically unify East and West Jerusalem.

In October 2013, Barkat was re-elected as mayor. The project, which was supposed to begin two years later, seemed to have failed in 2015, when French company Suez Environment that was to take part in the project pulled out in March 2015 under the pretext of “wanting to avoid any political interpretation.” Another French company, Safege, which was to participate in the planning of the cable car project, also pulled out in March 2015, once the French realized that this was a highly controversial political plan and not simply a business project.

With his second four-year term coming to an end, Barkat is aiming for a much higher goal: that of the Prime Ministry. Barkat has now resurrected the failed project and has succeeded in getting political approvals of the relevant Israeli ministries. Speaking to Likud activists, Barkat is seen on a video uploaded on his Facebook page Aug. 25 displaying the route of the cable car that will run from the Mount of Olives to the edge of Al-Aqsa Mosque/Haram al-Sharif with stops at the Church of Gethsemane and in the Abu Tor and Silwan neighborhoods.

According to the Terrestrial Jerusalem website, the original cable car route would have a length of 1.6 kilometers (1 mile) with three spurs: the first would be 1,300 meters (0.8 miles) in length leading from the old train station in Abu Tor to an area adjacent to the ramparts of the Old City, between Dung Gate and the external containing wall of Haram al-Sharif. The second spur would be 1,000 meters in length linking the Old City to the Mount of Olives, near the Seven Arches Hotel. A third spur of 500 meters would extend from the Mount of Olives to the area adjacent to Gethsemane. Since 2013, the project has changed in length and number of spurs, according to Daniel Seidmann, an Israeli lawyer specialized in the current developments in East Jerusalem.

Politically, Barkat did not miss the opportunity to make strong right-wing points negatively affecting the Palestinians of Jerusalem. He declared to the Likud Party activists Aug. 25 that the cable car route was created specifically to “show the world who really owns the city.”

Dawud added that he doesn’t mind the construction of a project that boosts tourism in the area, “but such tourism projects must be organic and meet our needs, and should be executed in cooperation with the local Palestinian tourism industry. It should not be a mere political statement.”

Seidmann told Al-Monitor that anyone following this project should ask the simple question of whether the Arab and Muslim world and European countries will countenance a cable car whizzing by Al-Aqsa Mosque, a mere 150 meters away. “If Jerusalem were a theme park or supermarket of holy sites, a cable car might work. But the idea of the cable car running close to one of mankind's most unique assets — and a World Heritage site of the greatest significance — can only be deemed a crime against Jerusalem,” he said.

Seidmann further pointed to the political ambitions of the Israeli mayor, saying, “Mayor Barkat clearly intends to change the city’s character by presenting the city as one with West Jerusalem, and Silwan and the Old City interconnected by the cable car project.”

Palestinian officials have responded very forcefully against Barkat’s plans. Sheikh Ikrima Sabri, the head of the Higher Islamic Council, called for the immediate cessation of the project, which he says aims at Judaizing Jerusalem. “Creating a cable car route that travels next to the walls of Al-Aqsa Mosque is a clear violation of the sanctity of the Islamic holy site,” Sabri told the local Al-Quds website Aug. 17.

He added that the proposed cable car project is planned to be built on lands owned by the Islamic Waqf department.

Some in the Israeli media did not respond kindly to the cable car plans of Barkat. In an editorial dedicated to the subject, Israeli daily Haaretz criticized Aug. 25 the “megalomaniacal” projects of the Israeli mayor. “For the sake of the city and its inhabitants, the mayor should involve himself less with self-promotion within Likud and megalomaniacal projects with a messianic flavor, and more with the question of how to act like the mayor of all of Jerusalem’s residents and to close this intolerable gap,” Haaretz reported.

International criticism of Israeli settlement activities, including from the United States, could delay the implementation of this controversial project. But from past experience, Palestinians know that until there is serious painful pressure on Israel, it will be difficult to stop their continued meddling with Palestinian lands in the occupied areas.