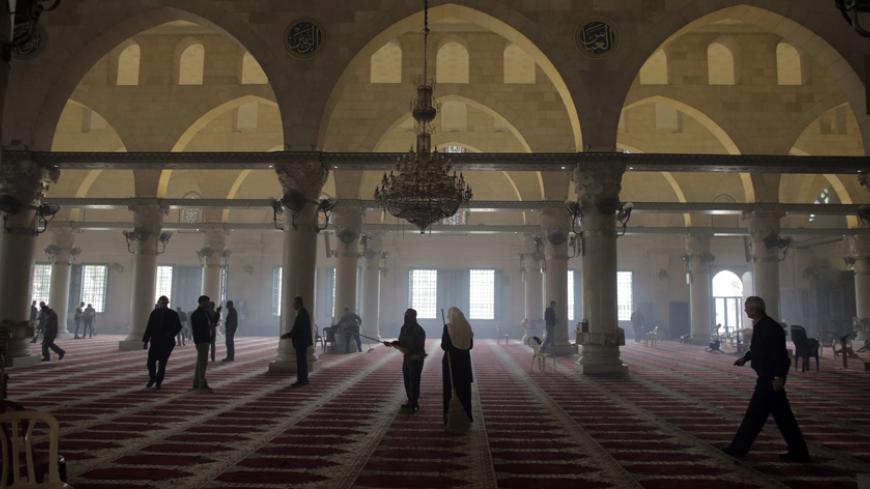 Palestinians clean the Al-Aqsa Mosque after clashes with Israeli police on the compound known to Muslims as Noble Sanctuary and to Jews as Temple Mount in Jerusalem's Old City, Nov. 5, 2014. - REUTERS/Ammar Awad

The United Nations Education Science and Cultural Organization (UNESCO) has finally produced resolutions "with teeth." Elias Sanbar, the permanent Palestinian representative to UNESCO told Al-Monitor that the resolutions adopted April 20 in Paris attempts to address the usual Israeli apathy to UNESCO decisions in a practical way.

While previously UNESCO would send missions — which were either allowed or denied visits to Jerusalem — UNESCO has resolved to appoint a permanent representative to be stationed in East Jerusalem. The specific wording of the resolution states: UNESCO “[d]eeply regrets the Israeli refusal to implement UNESCO previous decisions concerning Jerusalem particularly 185 EX/Decision 14 and reiterates its request to the Director-General to appoint, as soon as possible, a permanent and eminent expert(s) to be stationed in East Jerusalem to report on a regular basis about all the aspects covering all UNESCO fields of competency in East Jerusalem.”

Sanbar told Al-Monitor that the decision to have a UNESCO officer in Jerusalem was fought the hardest by some of the pro-Israel delegates on the executive board. “The US and especially Germany fought extremely hard against this actionable part of the decision,” Sanbar said.

It is unclear why Germany was so adamant about this particular resolution. Sources in Paris told Al-Monitor that Berlin attempted to introduce 20 substantial changes that would have deflated all operative clauses in the resolution without even committing that they would vote for it if these changes were implemented. Unlike the UN Security Council, no country has a veto power in UNESCO’s executive board.

While the Palestinian representative to the UN’s cultural agency was unhappy with the overzealous Germans, he sounded rather conciliatory in regard to the Americans, even though they voted against the resolution. “Their opposition to the resolution was not as tough as in previous years,” he told Al-Monitor.

The two resolutions deal with the situation in Jerusalem’s Old City, the destruction of educational institutions in the Gaza Strip, Bethlehem and Hebron.

Other issues dealt with by UNESCO included the criticism of Israeli soldiers who broke into Al-Aqsa Mosque on Oct. 30, 2014, and the destruction of the “historic gates and windows of the Qibli Mosque inside Al-Aqsa Mosque/Haram al-Sharif.” At the time, Jordan — whose waqf guards are stationed alongside Israeli police at all entrances of the mosque — withdrew its ambassador in protest on Nov. 5, 2014.

The UNESCO board said it “expresses its deep concern over the Israeli closure and ban of renovation of al-Rahma Gate building, one of Al-Aqsa Mosque/Haram al-Sharif gates, and urges Israel to stop obstruction of the necessary restoration works, in order to fix the damage caused by the weather conditions, especially the water leakage into the rooms of the building.”

The UN agency protested the “visit of the Israeli President on the 2nd of February 2015, to the illegal settlement in the historic center of al-Khalil/Hebron …” It also called for a freeze of settlement activities and the destructive nature of the Israeli security wall built deep in Palestinian territory, in contravention of international law.

In its last clause, the executive board has recommended to the 197th General Assembly session of UNESCO to use the term "occupied Palestine" when referring to the UN-recognized state of Palestine.

Jordan and Palestine — who worked together on drafting the resolution — welcomed the decision of UNESCO’s executive board. The Jordan Times quoted the Foreign Ministry spokesperson, Sabah al-Rafie, who said, “The resolution requires that Israel, as an occupation force, commit to international decisions and UNESCO resolutions related to the heritage of the Old City in Jerusalem and its walls, which has been on UNESCO's World Heritage List since 1981 and on the World Heritage in Danger list since 1982.”

In Ramallah, the Palestinian government also welcomed the UNESCO decision. A statement of the Palestinian Foreign Ministry said that this affirms the need to “safeguard the cultural heritage of Jerusalem and its walls.”

Sanbar told Al-Monitor that he is pleased with the strength of the UNESCO decision. “It reflects a new phase in which all these issues will be taken seriously from now on. Actions will have consequences from now on."