For the first time in nine years, Israel has agreed to allow the UN organization to inspect the walls of Jerusalem’s Old City, writes Dalia Hatuqa. 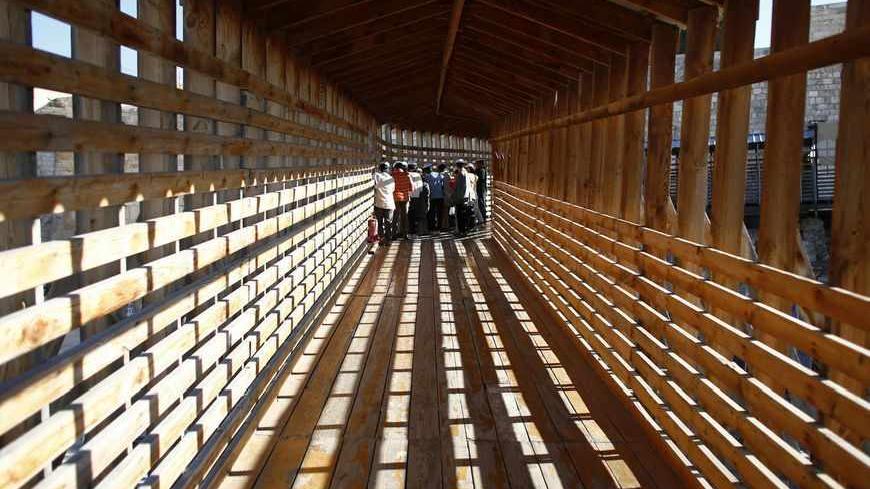 Tourists stand on a footbridge that leads from the Western Wall to the compound known to Muslims as the Noble Sanctuary and to Jews as Temple Mount, in Jerusalem's Old City Nov. 28, 2012. Jerusalem's Old City is holy to the world's three major monotheistic religions, Judaism, Christianity and Islam. - REUTERS/Marko Djurica

After routinely declining them access to the Holy City, Israel has agreed to allow UN Educational, Scientific and Cultural Organization (UNESCO) experts to assess the state of the “cultural heritage” of the Old City of Jerusalem and its walls, which it lists as “endangered” World Heritage sites.

Israeli authorities have continuously refused to have an investigative committee from the UN body visit the holy sites in Jerusalem, citing fears of bias toward the Palestinians. But on Tuesday [April 23] Israelis approved the move after Palestinians agreed to postpone five resolutions they were due to present to UNESCO’s executive board in Paris. The resolutions would have condemned Israel for its ongoing occupation and for endangering the holy sites and Arab character of east Jerusalem.

The agreement among the Palestinian Authority (PA), Israel and Jordan (in its capacity as custodian of the Muslim and Christian sites in Jerusalem) allows — for the first time since 2004 — the UNESCO team to inspect preservation efforts in the Old City and it’s walls dating back to the Ottoman era.

Israel has previously been rebuked by the UN culture agency for its digs and excavations near the Mughrabi Gate (Bab Al Magharbeh in Arabic). In 2011, the UN body called for the immediate cessation of all work being done by Israeli authorities next to the Gate’s Ascent, which links the plaza by the Western Wall to Al Aqsa Mosque compound in the Old City.

While the Israelis said the UN delegation would arrive in the “near future,” Palestinian sources said the mission is expected to begin its work mid-May, with a June 1 deadline for presenting its findings prior to the World Heritage Committee’s 37th session.

This move comes after a trip Palestinian President Mahmoud Abbas took to Jordan earlier in March in which the Palestinian Authority reasserted its commitment to an agreement dating back to 1924 wherein Jordan was given custody of Muslim and Christian sites in Jerusalem. This also comes after Palestinians joined UNESCO as a full member in 2011, and the Church of the Nativity in Bethlehem was added to the UN body’s World Heritage List a year later. The UN agency’s recognition of the Palestinians was met with a cessation of contributions by the US, which contributed some 22% to the body’s coffers.

This latest agreement on the UN body’s visit was hailed as a "win" by the Israelis, because it means there will be no resolutions condemning it for six months at UNESCO; Palestinians and Jordanians labeled it a “milestone” because UNESCO has been forbidden for years from assessing the conservation status of historic sites in the Old City.

A statement from Jordan’s royal palace said: “Jordan and Palestine, supported by Arab states, succeeded in pressuring Israel, for the first time since 2004, to accept and facilitate a UNESCO experts’ mission to investigate and assess the status of heritage and conservation of the Old City of Jerusalem and its walls.”

As news of UNESCO’s upcoming visit broke out, divergences between how the Israeli and Palestinian media broke the story quickly became apparent. “Israel to allow UNESCO inspections in Jerusalem after Palestinians agree to pull damning resolutions,” wrote Barak Ravid in the Israeli daily Haaretz. The Jerusalem Post took it a step further with the headline: “US steps in, stops PA going after Israel at UNESCO.”

The Post said Washington had exerted pressure on the Palestinians to commit to the six-month pause to resolutions by reminding them that they had already agreed to halt all unilateral moves at the United Nations to give John Kerry a chance at shuttle diplomacy.

The Palestine News Network, meanwhile, took a different approach stating that: “Holy Sites, Jerusalem Defense Agreement Pressures Israel to Accept UNESCO Experts Mission.” Ajyal, a popular Palestinian radio station, wrote on its website in Arabic: “Israel has been made to receive an international mission to inspect Jerusalem’s status.” The Al Ayyam daily led with a quote from the PA’s Foreign Minister Riyad al-Malki: “We agreed to a UNESCO committee being sent to Jerusalem after Israel agreed to six terms.”

“After Palestine became a full UNESCO member, we now have more tools to leverage and pressure the Israelis,” Malki told Al Ayyam. “The Israeli side sensed that the balance of power is no longer tilting in its favor. That’s why they made a proposal that showed for the first time their willingness to allow the UNESCO committee access to Jerusalem.”

Malki said the Palestinians laid down six conditions: A set date for the mission’s arrival and submission of its report, that Palestinians determine the nature of the mission’s work, that the mission would not be hindered in any way, that Israel would be present at the technical meetings in Paris, and that it would adhere to the findings of the fact-finding mission.

Meanwhile, five resolutions condemning Israel were removed from the agenda of UNESCO’s executive board. The debate on these motions, which would be delayed for six months, were due to take place this week during the executive board meeting focusing on, among others, the Old City, Israel’s denial of Gaza-based Palestinian students from studying at West Bank universities and the Mughrabi Ascent.

“We have been working hard on these resolutions for three months,” said Omar Awadallah, head of UN affairs at the Palestinian Authority foreign ministry. “All that’s happened is we have postponed putting these resolutions forward until we hear back from the mission. That way, we can also add the mission’s findings to our motions to be presented in November [at the General Conference of UNESCO].

“We were ready to submit these resolutions,” he told Al-Monitor. “But what happened is that there was a window of opportunity presented by friendly states to have Israel accept this mission through diplomatic means. Our hobby is not to accumulate resolutions. We just want Israel to abide by them.”

While Palestinian officials have hailed it as a positive step — Awadallah, for example, called it a real victory — some saw it as part of the same strategies that have yielded very little in the past years. “[This step] highlights that this whole system of going to the UN has been a sham,” said Diana Buttu, a lawyer and former spokeswoman with the Palestine Liberation Organization. “It’s all about trying to get greater recognition but it’s not indicating that the PA is actually planning on shifting strategies or trying to hold Israel accountable to anything.”

“The same promises came up when people were told we will take Israel to the ICC,” she told Al-Monitor. “They keep trying to put spin on things to say they are huge victories. At the end of the day, they are not. … These never-ending policies of sitting down and negotiating with the Israelis are not going to work. We have tried this for 20 years. … This constant waffling has left us with lots of people who are friendly, but who aren’t willing to do anything for Palestine.”