Although Israel claimed success in delaying the vote to be held in Istanbul on a UNESCO resolution submitted by Palestine and Jordan on Jerusalem, Palestinian and Arab officials say the postponement was due to security instability in Turkey following the coup attempt. 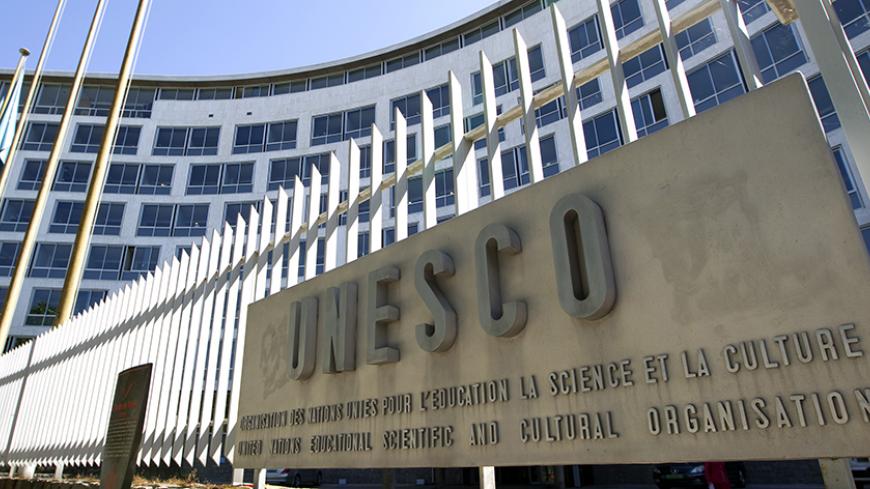 A general view of the UNESCO headquarters in Paris, July 17, 2012. - REUTERS/Charles Platiau

Despite the Israelis' initial claims that their efforts have partially succeeded in shelving a pro-Palestinian vote at UNESCO, the story that is emerging now is quite different. Palestinian and Arab officials say the delay in the vote that had been planned for July 20 in Istanbul was postponed due to the failed coup attempt in Turkey.

Omar Awadallah, the director of UN activities at the Palestinian Ministry of Foreign Affairs, told Al-Monitor that UNESCO had postponed voting on all resolutions, not just the one on extending the declaration that Jerusalem’s Old City meets UNESCO's criteria for being endangered. “Due to the security uncertainty connected to the failed coup in Turkey, UNESCO’s World Heritage Committee decided to postpone all decisions until it meets again in Paris in October,” said Awadallah.

Kuwait’s permanent delegate to UNESCO, Meshal Hayat, echoed this position in a press release issued by the Arab Group at UNESCO, saying the suspension was due to the “current tensions in Turkey.” In the July 17 press release appropriately titled “Israel’s false allegation,” the Arab Group paints a picture that contradicts the Israeli story, quoting the Palestinian ambassador to UNESCO. It read, “Ambassador Mounir Anastas explained that what happened at the World Heritage Committee of UNESCO in Istanbul today is exactly the opposite of the Israeli claims, clarifying that the consultations that have been conducted in Istanbul within the World Heritage Committee showed that there was a consensus among all the committee members, including the EU members, to adopt the decision by consensus and without a vote. This is despite [Israeli Prime Minister Benjamin] Netanyahu’s outrageous campaign against the decision, and the Israeli strong opposition and diplomatic efforts to thwart it.”

Palestinian officials say that the Jordanian-Palestinian resolution to extend the inclusion of Jerusalem’s Old City on the List of World Heritage in Danger had a clear majority in the World Heritage Committee leading up to the postponed July 20 vote. “All resolutions were postponed until October in Paris, and not just the Jerusalem one,” Awadallah insisted.

Palestine, which has been a full member of UNESCO since 2011, had succeeded in including Bethlehem's Church of the Nativity and pilgrimage route as well as the village of Batir on the list of world heritage sites in 2013 and 2014, respectively.

Jerusalem has been considered an endangered world heritage property since 1982, according to Awadallah. “Back then, the Jordanian delegation had requested and succeeded in listing Jerusalem and its walls as being in danger,” Awadallah said.

Awadallah noted that the joint Palestine-Jordan request detailed the reasons Jerusalem’s Old City should stay on the List of World Heritage in Danger. “We provided proof of this danger by documenting the ongoing dangerous Israeli digs, the Israeli incursions to Haram al-Sharif/Al-Aqsa Mosque and the settlers’ violence that continues unchecked by the Israeli occupiers,” he added.

In the press release, the Arab Group explained some of the issues that justified UNESCO’s move to delay the voting session along with the need to maintain the Old City of Jerusalem on the list of endangered sites. The group also addressed Al-Aqsa Mosque, calling upon Israel “to respect the status quo, which defines Al-Aqsa Mosque/Al-Haram Al-Sharif as a Muslim holy site of worship" and "to stop soldiers and extremist Israelis from storming the site, as these incursions desecrate the sanctity and character of Al-Aqsa Mosque/Al-Haram Al-Sharif.”

Since April, Netanyahu has been speaking out very forcefully against the UNESCO resolution that refers to Al-Aqsa Mosque in Jerusalem by only its Arabic name, identifying the area that contains Islam’s third-holiest mosque, Al-Aqsa Mosque, in Jerusalem’s Old City, as Haram al-Sharif.

For their part, Israelis and Jews call the area the Temple Mount, in reference to their claims that the mosque lies atop the remnants of the Jewish temple destroyed in the year 70. Awadallah denounced Israeli attempts to Judaize the Islamic site. “We don’t want a religious war. These are occupied territories and the entire world recognized East Jerusalem as part of Palestinian lands occupied by Israel in 1967,” he argued.

Israel may have won a short-term public relations victory by taking credit for the delay on a decision that now appears to have had nothing to do with the Israeli pressure on UNESCO’s World Heritage committee, whose 21 member states are mostly in support of the Arab request regarding Jerusalem.

Though such false claims are often quickly exposed, they often have a chilling effect on those who oppose Israel.