A recent tweet by former Prime Minister Ehud Barak could portend the next big challenge to Benjamin Netanyahu's grip on power. 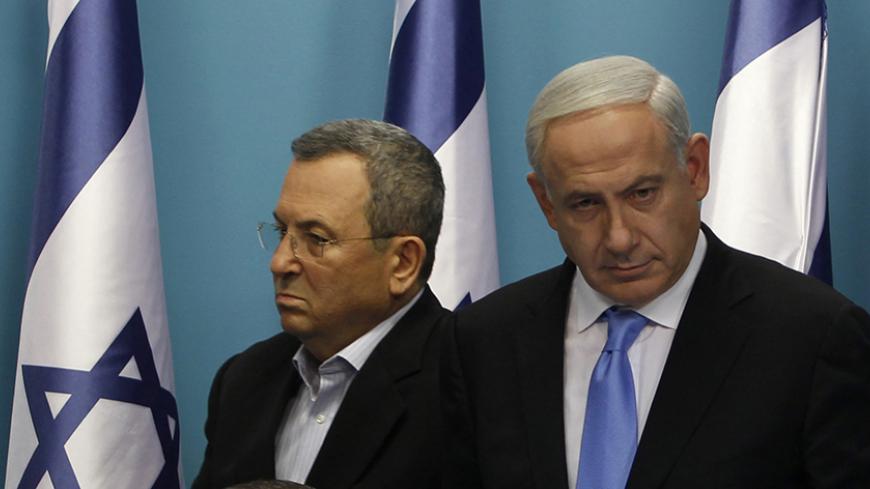 Israeli Prime Minister Benjamin Netanyahu made an embarrassing slip of the tongue in interviews he gave to Israeli television Sept. 24. Netanyahu was asked why he had decided to call the family of Elor Azaria, who shot and killed an incapacitated Palestinian assailant March 24 in Hebron, although the soldier is on trial for manslaughter over the incident. In his response, Netanyahu compared the call to any call he would make to a bereaved family that had lost a son in battle.

Netanyahu came under harsh criticism for this statement, but the first response released by his office, at 6:30 a.m. the next day, a Sunday, did not include an apology. Rather, it was a denial and an attack on the media. Then someone focused Netanyahu’s attention on a tweet sent a few hours earlier from New York by former Prime Minister Ehud Barak that read, “Anyone who compares Elor Azaria to Israel’s heroes and missing soldiers is a terrified and confused man, who has lost whatever was left of his good judgment, or, God forbid, has decided to try and ransack the Israel Defense Forces’ [IDF] values. This must not be allowed to happen. A sitting prime minister who does not take back this unrestrained nonsense will always bear the mark of indignity of someone who forgot what it means to be an IDF fighter.”

A short while later, a little after 8 a.m., Netanyahu released a new statement with a very different tone: “I’m sorry if my statements were misconceived. I absolutely did not mean to compare the suffering of bereaved families, the suffering that I know of firsthand, to the situation of other parents who are in distress. There was no comparison and there cannot be any such comparison.”

The people around Barak are convinced that Netanyahu “straightened up” only after he read the stinging tweet from his former IDF commander and decided to change tactics because of it. Instead of denying or absolving himself of responsibility, as Netanyahu is prone to do, he simply apologized. The relationship between Barak and Netanyahu is among the most complicated and intriguing ones in Israeli politics. Even when Barak was defense minister in Netanyahu’s government (2009-13), Netanyahu’s deep deference to Barak never dimmed.

Netanyahu had been a young officer in the Matkal commando unit in the late 1960s and early 1970s when Barak was the unit’s legendary commander. The force was the IDF’s ultimate elite unit, with troops forged in steel. Its commander was always an outstanding figure, “destined” for accolades and greatness. Many commanders of the Matkal unit have made their way up the pyramids of the military and political establishments, some even to the top. In the case of Barak, one of the unit’s most legendary commanders, the aura was even more pronounced. His troops worshipped him, made oaths in his name, and were eager to “kill themselves” on the missions he sent them on.

An example of this is when Netanyahu returned with his squad from an operation across enemy lines into Syria. After reaching Israeli territory, Netanyahu made contact with his commander, Barak, who ordered him to bring back to the unit’s base in the center of the country a landmark boulder from a well-known intersection on the Golan Heights. It was later revealed that Barak had just wanted to have a little fun, so he had decided to play a joke on Netanyahu and his troops, who were not amused. They spent hours circling the boulder. They tried using cranes to move it, and came up with all sorts of other ideas, but the stone refused to budge. In the end, Netanyahu returned to base without the rock. The mission itself had been a success, but Netanyahu felt that he had failed miserably.

Barak was a kind of “big brother” to the Netanyahu brothers. He was close to the prime minister’s older brother, Jonathan ("Yoni"), who commanded the Matkal unit years after Barak and would die in the 1976 Entebbe raid to release hijacked Air France passengers. Barak was also involved in several personal crises that Yoni faced. As commander of the Matkal unit, Barak was treated like royalty in the Netanyahu home.

These kinds of experiences and feelings are etched in people’s souls, so when Netanyahu returned to the prime minister’s office in 2009 with Barak serving as his defense minister, there were no bounds to the joy and satisfaction Netanyahu felt. In a conversation with Al-Monitor, one of the people closest to Netanyahu who spoke on condition of anonymity described it as an “ongoing orgasm.” After all, Netanyahu was now in charge.

During those four years, Barak became Netanyahu’s most important and most intimate confidant, even though they were in rival parties, Labor and Likud, respectively. The two men concocted all the political chicanery and defense ploys of those years, including the huge, deceptive crusade against Iran. Nonetheless, Netanyahu worried about Barak. One of the people closest to Netanyahu told Al-Monitor on condition of anonymity that his addiction to polls was exacerbated when it came to Barak. “Even when Barak’s popularity plunged toward zero, Netanyahu pushed his pollsters to keep checking on Barak’s level of support. He was never at ease when it came to his former commander,” the source said.

Barak resigned from political life in 2013 and disappeared from the political map. Now he is making a comeback. The former prime minister, defense minister and IDF chief of staff has declared war on his former partner Netanyahu and is attacking him on a daily basis in radio and television interviews and through frequent tweets and posts on social media.

Barak may be 74 years old, but he looks born anew. This is causing Netanyahu to lose his equilibrium and along with it plenty of sleep. Public support for Barak is still very low, but the buzz that he generates puts Netanyahu under pressure. Barak has identified a vacuum and managed to sneak inside, just as he did in the good old days, when he was a commando.

With Yesh Atid Chair Yair Lapid, who is leading in the polls, trying to present the public with a toned-down, saner version of Netanyahu, and Zionist Camp leader Isaac Herzog, who is floundering in the polls, trying to squeeze into Netanyahu’s government, Barak has become the sole “anti-Bibi” on the political map. So far, it looks like he is enjoying every minute of it. Netanyahu is enjoying himself less so.

What does the future hold for these two men? It is hard to believe that Barak will run again for Knesset on any platform. On the other hand, it is also hard to believe that he would turn down an offer by one political party or another to serve as defense minister. The main thing, he says, is to free Israel from Netanyahu's yoke. It will be a fascinating matchup.