US opposition to lending to Iran by multinational organizations has undercut Tehran's ability to face growing environmental challenges, the deputy head of Iran's Department of Environment says. 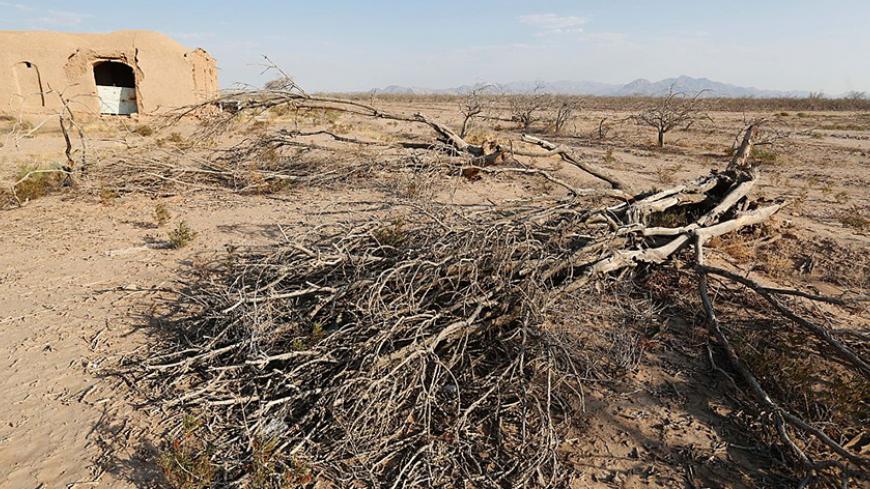 Dead pistachio trees lie in a field farmers left behind due to lack of water in an abandoned village near the southern Iranian city of Sirjan, Aug. 14, 2016. Iran is seeking more international cooperation to mitigate the damage that has been done to the country's environment. - AFP / ATTA KENARE

NEW YORK — Faced with mounting environmental challenges, Iran is implementing an ambitious program to reduce greenhouse gases and restore dried wetlands, but it would benefit from more international cooperation, including a resumption of lending by the Global Environment Facility (GEF), a senior official says.

In an exclusive interview Sept. 22 on the sidelines of the UN General Assembly's annual meeting, Majid Shafie-Pour, the deputy head of Iran’s Department of Environment, told Al-Monitor that US opposition to GEF support for Iran has hurt his country's ability to achieve even more.

"Environmental challenges in Iran are really on a soaring path," Shafie-Pour said. He cited the impact of climate change, drought and a rise in devastating dust and sandstorms from dried-up lakes and wetlands.

Tehran has also been experiencing a drop in water pressure as its population grows and reservoirs become depleted.

Under the recently concluded Paris agreement, Iran pledged to reduce greenhouse gases that contribute to climate change by 4% by 2030. "If we have all the sanctions removed and gain the support and partnership [of international organizations] we would add another 8% on top of that," Shafie-Pour said.

US opposition to projects in Iran by the GEF, an arm of the World Bank, has reduced Iran’s ability to deal with environmental threats.

Shafie-Pour told Al-Monitor that of the $40 million allocated to Iran by the GEF in a period ending in 2013, about $35 million was never paid. "Although we had a number of projects endorsed, when it came to the board in Washington, we were surprised that no decision was ever declared," he said.

As a result, the GEF reduced Iran's allocation to $17.7 million under the next funding cycle that began in July 2014, he said. "But even that, we have not been able to date to get the approval of even one single project."

US law forbids US support for multinational lending to countries on the State Department's list of countries supporting terrorism. US officials have considered trying to waive the law for the purpose of facilitating environmental projects in Iran but fear an adverse congressional reaction.

Shafie-Pour said his country was doing what it could on its own and through cooperation with the United Nations and some countries, such as France, whose environment minister, Segolene Royal, visited Iran in August.

Wetland restoration has been a particular area of concern because of the impact of desertification on local communities and on air pollution in Iran's cities.

"We are doing at the national level all that we have in our capacity to restore wetlands both in the west and the east, as well as Lake Urmia," he said. The condition of the lake, which has dried up at a frightening pace because of climate change and poor water management, threatens the livelihood of 14 million people in northwest Iran who rely on agriculture. Windstorms that whip up the salt and sand at the bottom of the lake have also been the source of devastating air pollution.

Shafie-Pour noted that President Hassan Rouhani's first Cabinet meeting after he took office in 2013 was devoted to a discussion of Lake Urmia and that Iran was implementing a long-term project to try to restore the lake.

Air pollution in Iranian cities is caused not just by sandstorms but by poor quality gasoline and inefficient fuel consumption by cars. Shafie-Pour said that eight large cities in Iran have "very poor air quality" and sometimes have to shut down schools and government offices because of the danger of breathing air outside.

To deal with the problem, Iran is accelerating a program to upgrade refineries. Sanctions imposed on importing refined petroleum products led the prior government of Mahmoud Ahmadinejad to encourage production of poor-quality gasoline to meet domestic needs.

Iran also suffered from sanctions that made it difficult to import catalytic converters, Shafie-Pour said.

"We would very gratefully open our arms and encourage both private and public enterprises" to help obtain modern technology, he said.

The Rouhani government has established an international environmental expo for companies to exhibit their products. Shafie-Pour said the next one will be held in Tehran on Feb. 25-28.

Iran produces electricity exclusively with natural gas and does not rely on liquid fuels or coal as do many other countries. Shafie-Pour said Iran was looking to increase the efficiency of power plants by 40% and to increase the use of renewable sources of energy to produce 7,500 gigawatts of installed capacity by 2030.