Despite its support for efforts to confront climate change, the United States is blocking key multinational environmental projects for Iran that would have global benefits. 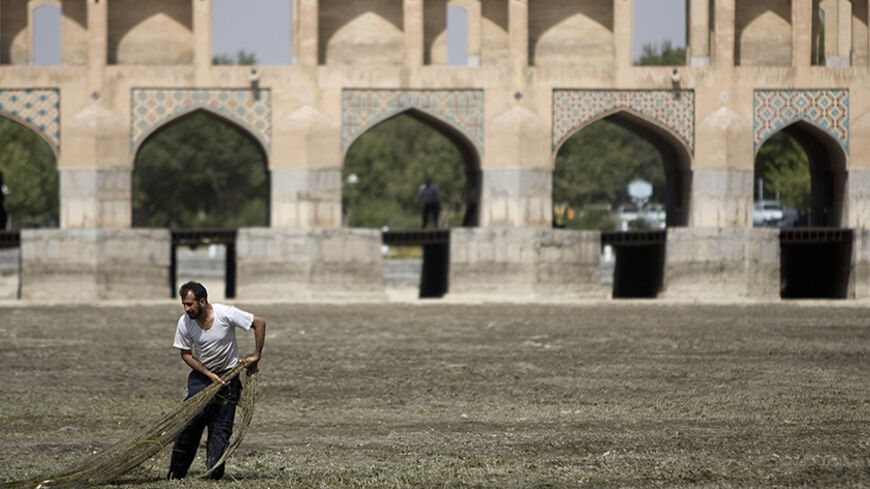 A fisherman drags his nets at the dried-up Zayanderood River, with the Khajoo Bridge in the background, in Esfahan, 450 kilometers (281 miles) south of Tehran, June 27, 2008. - REUTERS/Morteza Nikoubazl

At a time of mounting environmental challenges for Iran and sensitive consultations over its nuclear program and Iraq, the Barack Obama administration is holding up implementation of several key Iranian projects developed by the Global Environmental Facility (GEF), according to well-informed sources.

Two experts on Iran and the environment who requested anonymity told Al-Monitor that the GEF is waiting for a green light from the US government before moving forward on the projects, which have otherwise been cleared by the organization.

The multiyear projects include safely disposing of PCBs (polychlorinated biphenyls, a synthetic chemical compound linked to endocrine disruption that has been banned in the United States since 1979), strengthening Iran’s capacity to do environmental assessments and supporting biodiversity. Together, the projects are worth more than $7.6 million.

An official at the GEF who spoke to Al-Monitor on the condition that he not be identified said, “If a project is delayed, it is for technical reasons. This is not a political issue as far as I know.” The two experts on Iran and the environment disagreed, however, asserting the holdup is indeed political and that there appears to be a difference of opinion with the Obama administration about whether to allow the GEF — to which the United States is a major donor — to go forward with the grants. A spokesperson for the US Treasury Department declined to comment on any internal differences, saying only, “The United States has made clear that it objects to any financing for Iran.” However, another administration official, also speaking on condition of anonymity, told Al-Monitor, “Both the State Department and OFAC [the Treasury Department’s Office of Foreign Assets Control] have looked at this issue, and we are of the view that a lot of these programs could proceed but they have been blocked because of congressional opposition.”

The US State Department has supported the direct use of US funds to promote exchanges between US and Iranian environmentalists. US sanctions, however, have curbed loans and grants to Iran by such international financial institutions as the World Bank, of which the GEF is a subsidiary.

Kenneth Katzman, an expert on Iran sanctions at the Congressional Research Service, told Al-Monitor that Iran’s place on the State Department’s list of sponsors of terrorism “requires the US to vote against World Bank lending to Iran. However, the United States can be outvoted by other member states, so the US does not have an absolute veto over such lending. In practice, however, if the US objects, in most instances the loans will not be approved.” Katzman added that UN Security Council Resolution 1747 “also called for international caution on World Bank lending to Iran, although not forbidding it altogether.”

The GEF, according to its website, is a “partnership for international cooperation where 183 countries work together with international institutions, civil society organizations and the private sector to address global environmental issues.” Founded in 1991, the organization has provided $12.5 billion in grants to “support activities related to biodiversity, climate change, international waters, land degradation, and chemicals and waste in the context of development projects and programs.”

The GEF has a track record of working with Iran, including on carbon sequestration and conserving wetlands. Most of the projects, however, predate the deluge of sanctions imposed on Iran by the United States and the European Union since 2010 in response to Iran’s advancing nuclear program.

One of the Iran experts noted that Tehran has a strong record of following up on GEF projects using its own resources. He said that besides carbon sequestration, ongoing GEF projects include promoting integration of natural resources management into district-level planning and conserving biodiversity in the Zagros Mountains and in the Caspian Hyrcanian forest landscape.

Iran faces severe challenges to biodiversity because of climate change and the overuse and misuse of natural resources, including water. Iran is also laboring to comply with international conventions that require phasing out once commonly used chemicals that interfere with Earth’s protective ozone layer or are otherwise toxic to human and animal health. Many of these activities would clearly benefit the world as a whole. According to one of the Iran experts, however, Tehran has only been able to use about a third of the resources set aside for it by the GEF.

According to the experts, the projects currently awaiting US approval include the following:

The Iran experts said they had hoped that these projects would move forward after a recent meeting of the GEF Council in Cancun, Mexico. That did not, however, happen. If the projects are delayed much longer, the experts said, they might be canceled, meaning the effort and money put into designing them will have been wasted.

The dispute with the GEF comes at a time when the Iranian government is showing an increased commitment to dealing with environmental issues, and there is a growing, grass-roots movement supportive of conservation, reducing pollution and stemming climate change. The experts noted that Iran’s Department of the Environment and other ministries are increasing their efforts to address the evaporation of Iran’s major lakes, inefficient agriculture and deforestation. Said one expert, “President [Hassan] Rouhani’s administration is prepared to be persuaded by evidence — especially the mounting climate change modelling evidence of an Iran where water is less available and increased temperatures are increasing evaporation.”

The expert continued, however, saying there are also “voices which threaten to undermine the bold vision required to build momentum behind a prioritization of the environment. For this reason, positive support to those in Iran who are prepared to act to reverse environmental management problems to reduce current problems and future threats from climate change is in the planet’s interest as well as Iran’s.”