Global warming and a deteriorating environment are a large if not larger threat than sanctions to the well-being of Iran’s 75 million people. 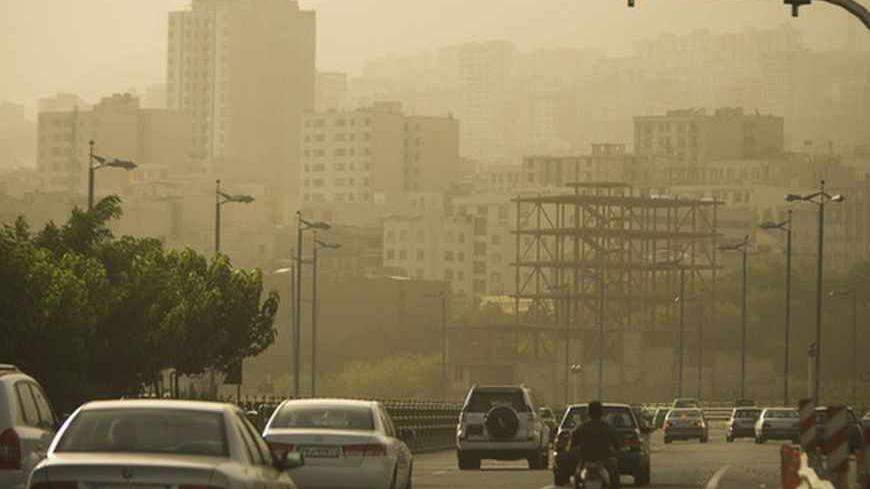 Motorists travel on a highway in Tehran as the city is covered in dust, July 6, 2009. - REUTERS/Morteza Nikoubazl

TEHRAN, Iran — As temperatures soared above 105 degrees Fahrenheit during one of the hottest summers here in recent memory, no snow was visible atop the mountains ringing Tehran and no water flowed down the narrow channels along main streets (known as jubes in Farsi) that a year ago were still full of fresh mountain runoff. A furry brown haze obscured the skyline, irritating eyes and tickling throats.

While most press attention has focused on the inauguration of a new Iranian president, the nuclear crisis and the impact of Western economic sanctions, global warming and a deteriorating environment loom as large if not larger as a threat to the well-being of Iran’s 75 million people.

“Here in Iran, we are situated in a low-precipitation belt of the planet,” Gary Lewis, the UN resident coordinator in Iran, told Al-Monitor. "One primary concern must therefore be water. We are at risk of a perfect storm: water scarcity, land degradation and climate change all feeding into each other.”

Water resources are dwindling as Iran’s three major lakes dry up, the majority of the country's other lakes are also in the process of disappearing and becoming contaminated with wastes and chemicals, neighboring countries build dams that divert shared rivers away from Iran and underground aquifers are depleted.

Lake Orumieh in northwestern Iran has been “despoiled to the point of destruction,” wrote Eskander Firouz, a legendary Iranian environmentalist, in his 2005 book The Complete Fauna of Iran. Lake Hamoun in the southeast, “once the greatest expanse of fresh water in Iran, is now totally dry,” according to Firouz, while a third once-giant lake — Bakhtegan near the southern city of Shiraz, the third-largest lake in Iran, dried up completely almost a decade ago.

Lewis told Al-Monitor that expanding agriculture to feed Iran’s growing population has led to “unsustainable harvesting of aquifers.” There are currently about 650,000 wells in Iran that provide more than half the water consumed in the country, he said.

Despite the looming shortages, Iranians do not use water efficiently.

Domestic use of water resources in Iran is about 70% more than the global average, said Lewis. In Tehran, shopkeepers can be seen hosing off the sidewalks in front of their stores instead of sweeping up the dirt; during last week’s heat wave, municipal workers also liberally watered public gardens with hoses rather than using more scientific means of irrigation.

Lewis said official statistics show that there is only 30% water-use efficiency in agriculture, a sector which accounts for over 90% of water use in Iran. Deforestation and desertification are also major problems contributing to land degradation, he said.

“We need to price the resources we are consuming fairly — including water,” Lewis said. “And we need to build climate-change resilience at the community level over and above what we do to change attitudes at the national and sectoral levels.”

While there are dozens of national parks, wildlife refuges and protected areas in Iran, biodiversity is decreasing and more needs to be done to bolster guards assigned to prevent poaching, experts say. Firouz told Al-Monitor that Iran's wildlife has declined by 85%, that rangelands are being degraded and destroyed and that the best of Iran’s forests have disappeared and have often been replaced by orange trees and unsustainable agriculture.

Air pollution is another major problem. Since the 1979 revolution, Tehran’s population nearly tripled from about 4.5 million to more than 12 million people, who sometimes all seem to be jamming the roads at the same time.

Relatively cheap gasoline — still less than $1 a gallon after subsidy reforms — the poor quality of locally made gas (which Iran must refine because of sanctions that block imports) and the preponderance of cars with substandard emissions controls are major contributors to pollution in the Iranian capital. The lack of a more extensive and reliable public-transportation system is also a major factor. The Tehran municipality has invested more in roads, tunnels and flyovers that benefit private automobile owners than in buses, subways and trams that could relieve congestion and pollution.

The pollution has serious health consequences. In the winter, when the air is at its dirtiest because of inversion which traps pollutants under a layer of cold air on windless days, the Tehran municipality often closes offices and schools and those Iranians who do venture out wear face masks.

Over the past several years, Iran has also been suffering from increasingly severe dust and sandstorms. These are especially impacting western provinces bordering Iraq, from where the storms mainly originate. According to Lewis, “The sandstorms have been caused by the abandonment of vast swathes of agricultural land during the past 10 years as well as the drying out of wetlands and rivers. Where they are hitting Iran hardest is in agriculture, infrastructure, the environment and public health.”

In the height of summer, pollution levels are also high, particularly in south Tehran, which is at a lower elevation than the wealthier north. A pharmacist in the south Tehran neighborhood of Javadieh told Al-Monitor that asthma is a growing problem, particularly among young children and that there is a shortage of inhalers — because of sanctions and government mismanagement — to treat this potentially life-threatening condition.

Iran has also been slow to embrace renewable energy, which currently provides less than 1% of energy demand.

All is not bleak, however. There is rising environmental consciousness in Iran, particularly among educated youth. A middle-aged ecologist named Mohammad Darvish writes frequently on the subject and has predicted that Iran will someday have a “green” movement that is environmental rather than ideological in nature.

Firouz, who headed Iran’s first department of the environment before the 1979 revolution, told Al-Monitor the topic is increasingly covered by the Reformist-moderate Iranian press, including Etemaad and Shargh newspapers, and that more than 1,000 young people have formed a blog on Facebook devoted to his work on biodiversity, conservation and the need for better planning that takes the environment into account.

“Countries of the region — including Iran — need to learn the hard lessons of the Chinese development model, which in recent decades has seen substantial wealth generated but at massive environmental cost,” Lewis told Al-Monitor. “But the real breakthrough will only come when discussion on the impact of climate change … goes beyond a discourse between the technocrats and policy-makers. The public as a whole needs to understand what is at stake. For this, we need much, much more public discussion and awareness raising.”