Iranians are elated that actor Leonardo DiCaprio is helping to raise awareness of the drying of Lake Urmia. 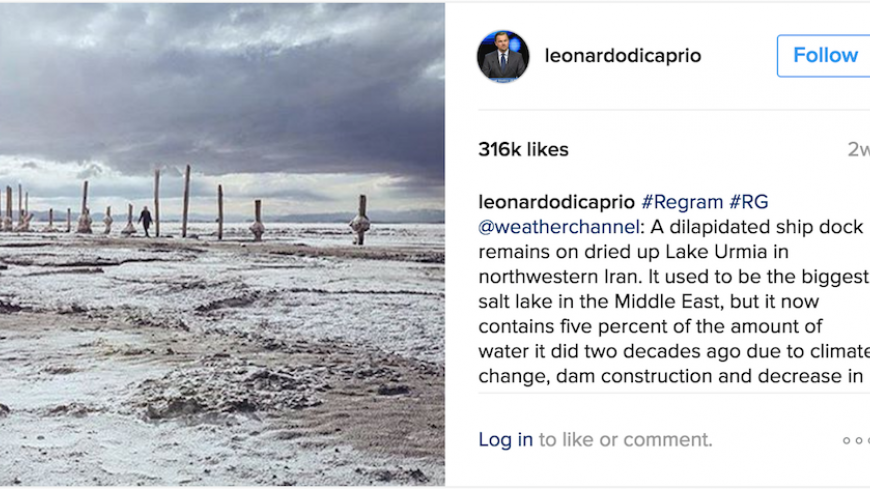 An image shared on Leonardo DiCaprio's Instagram account showing a dilapidated ship dock on dried up Lake Urmia in northwestern Iran, May 6, 2016. - INSTAGRAM/Leonardodicaprio

Iranians were elated when they discovered that actor Leonardo DiCaprio had shared on his Instagram account a photo of Iran. DiCaprio, a champion environmentalist, republished The Weather Channel’s photo of drying Lake Urmia to bring attention to climate change. What he didn’t know was that so many Iranians — at home and abroad — would show an outpouring of love and support for his small gesture of raising awareness of this issue.

The Instagram post went viral, receiving more than 313,000 likes and 117,000 comments, including, “Leo thanks for being concerned about what's happening all around the world especially my motherland Iran, it's truly humbling” and “Iranians appreciate it. Love you Leo.”

“What Mr. DiCaprio did is praiseworthy,” Gary Lewis, the United Nations resident coordinator in Iran, told Al-Monitor. “And it is important because as a result of his action to publish the picture a vastly larger number of other people on this planet now know about this problem. This will bring a sense of hope that others might get more involved to support efforts to overcome the Lake Urmia challenge and other similar challenges in Iran and beyond.”

In addition to Iranian environmentalists and journalists, Seyyed Hadi Bahadori, a member of parliament from Urmia and associated with one of the projects to revive the lake, welcomed DiCaprio’s gesture. Even Iranian actress Mahnaz Afshar tweeted on the issue: “If only DiCaprio’s post about Lake Urmia would lead to prudence so that life will return to this half-dead lake.”

Lake Urmia, a UNESCO Biosphere Reserve and the sixth-largest hypersaline lake in the world, was once the largest salt lake in the Middle East. It used to span almost 90 miles in length and was 34 miles at its widest point. Since 1970, it has lost 70-80% of its surface area, with the greatest shrinkage taking place during the 1990s. In 2008, the lake was cut in half by a 9-mile causeway meant to shorten the travel distance between Tabriz and Urmia.

The lake was also once home to migratory birds, which included ducks, egrets, flamingos and pelicans. The desiccation destroyed the habitat for a brine shrimp called artemia, which is an important staple for the birds.

For the local population, the impact is more complex, as the tourism industry is dying. The lake was once a popular destination for those seeking its therapeutic black mud. Instead, the now dry lake bed has led to desertification, thereby allowing for the creation of noxious dust that causes health problems. Salt storms have also become more frequent, damaging the local crops by poisoning the soil. Ultimately, many farmers have been forced to move.

Poor water management, a switch by local farmers to water-reliant crops, rising temperatures and drought, and the damming of rivers that supply 90% of the lake’s water have all contributed to its drying.

Lewis said, “Water shortage is one of Iran’s biggest environmental threats and to me Lake Urmia is for Iran the most emblematic example of water concerns.”

Lake Urmia is a source of pride for northwestern Iran. Ethnic Azeris see the lake — known as “the turquoise solitaire of Azerbaijan” — as a symbol of their identity. Similarly, it is home to the Kurds, who desire to be more involved in managing the lake. In 2011, widespread protests took place in Tabriz and Urmia over the poor state of the lake, leading to countless arrests.

Former President Mahmoud Ahmadinejad blamed a foreign conspiracy for the state of the lake, saying, “The Western countries devised a plan to cause our drought. According to accurate climate reports, the European countries used special equipment to create rain clouds in Europe and prevent them from reaching Iran and the Middle East.” Ahmadinejad then pledged to release 600 million cubic meters of water from the Aras Dam, but nothing was done.

Lake Urmia is high on the agenda of Ahmadinejad’s successor. President Hassan Rouhani has pledged the equivalent of $5 billion to help restore the lake over the span of a decade, which includes funds for 88 projects, most of which focus on infrastructure and the improvement of irrigation systems. In addition, the Urmia Lake Restoration Program was established to help save the lake.

In past years, multilateral sanctions prevented opportunities for international conferences, the use of necessary equipment and the manpower to address the issue. With such sanctions now lifted, it allows for more collaboration between Iranian and international scientists.

The United Nations Development Programme and the Food and Agricultural Organization of the UN are currently working with Iran’s Department of the Environment and the Japanese government to implement “integrated natural resources management.” They hope to preserve what remains of Lake Urmia by empowering rural women and optimizing water consumption patterns and agricultural methods.

"I think the will is there, but more people need to be involved: local communities, donors, and national and international organizations along with the Iranian government to overcome this challenge,” Lewis said. “As I have mentioned multiple times, environmental challenges are global challenges and they require the attention of the national as well as the international community. Iran is on the front line of the impact of climate change in the Middle East. Our environmental decisions need to be correct. And they need to be implemented with urgency.”

After DiCaprio posted the photo on Instagram, the Urmia Lake Restoration Program invited the American actor to visit the drying lake. Al-Monitor was unable to reach DiCaprio for comment. While the UN has not reached out to him directly about the matter, Lewis told Al-Monitor that the UN’s Tehran office is trying to get in contact to see if DiCaprio and fellow activists are interested in joining forces.

The American actor founded the Leonardo DiCaprio Foundation in 1998, which “works to protect the Earth’s last wild places by implementing solutions that restore balance to threatened ecosystems, and ensuring the long-term health and well-being of all its inhabitants.” With the foundation yet to commence a project in the Middle East, perhaps it will dive into Lake Urmia first.