Why Gaza's intellectuals are fleeing abroad

Lack of freedom of thought and expression is leading creative young Palestinians to flee the Gaza Strip in search of a place where they can work freely. 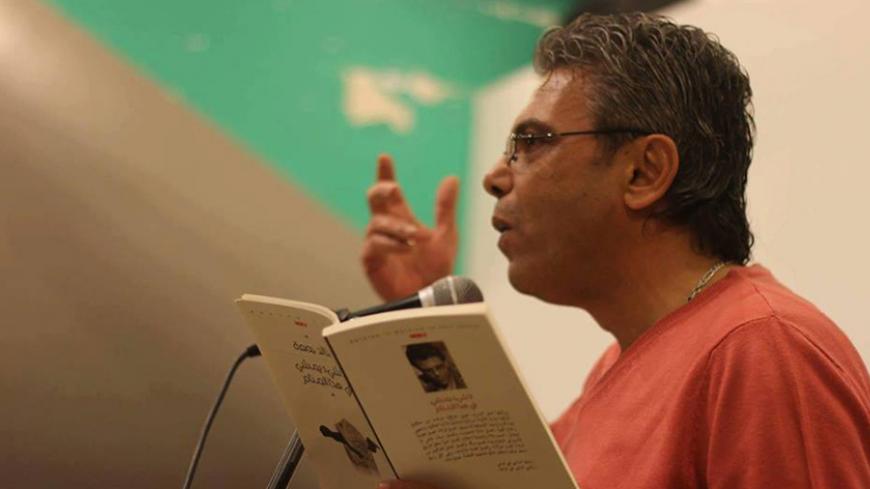 Poet Khaled Juma at a reading of his poetry in Ramallah, West Bank, April 17, 2016. - Facebook/@khaledjumaintranslation

Khaled Juma, a poet from the Gaza Strip and culture editor for WAFA, the Palestinian news agency, has written more than 30 books, including poetry, children's literature and plays. A Sept. 18 book-signing event in Ramallah celebrated “In the War, Far from the War,” Juma's latest collection of poems, the first he has produced while living in the West Bank. The collection revolves around his experience in the summer 2014 war with Israel from a distance. Juma had lived in Gaza during the previous Israeli wars on Gaza, in 2008-2009 and 2012.

Juma is only one of a notable group of writers and intellectuals who have left the Gaza Strip in recent years, heading for Europe, Turkey, Egypt and the West Bank, given the lack of horizons in Gaza to develop their talent and other obstacles.

“I moved to Ramallah in 2013 by sheer chance after I got permission to go to the West Bank,” Juma told Al-Monitor. His main reason for moving to Ramallah was to spend more time writing. “It took me two years to write album lyrics for artist Reem Talhami and composer Said Murad due to power cuts and interrupted Skype meetings,” he said.

Juma stressed, however, that not a day goes by when he doesn't think or write about Gaza. “I keep in my refrigerator a kilo and a half of Gazan coffee,” he said.

Writer Ahmed Baalousha also made the move to Ramallah. A satirist, Baalousha told Al-Monitor that he left because he began to feel he was wasting his years in Gaza. “I was losing a part of my life in an area susceptible to a lot of escalating crises,” he said.

Baalousha spoke of the other creative young people who have left Gaza in the fields of literature, community work and science. “They know very well that opportunities await them overseas and that Gaza does not have the time to appreciate any of them.” Indeed, the work of Gaza's cultural and other innovators generally fails to find a receptive local audience given that it is often critical of the economic, social and political situation in Gaza since Hamas seized control in June 2007.

Baalousha often wishes he could return to Gaza, remarking, “It's where we lived and established our identities and achieved our fame, but what Gaza is going through now is a cause for despair and departure.”

Baalousha stressed that life in Gaza gives satirists material for a panoply of stories. Although he was never arrested by Hamas or its apparatus, Baalousha said the Gaza Strip deprives people like him of any glimmer of hope. Nonetheless, he stated, “I still write about Gaza, about every detail related to it, about its daily events and its successive crises.”

In addition to stifled creativity, life for young Palestinians is difficult in other ways. Unemployment among graduates stood at 51% in the first quarter of 2016, according to data published by the Palestinian Central Bureau of Statistics on World Youth Day, Aug. 12. A statement accompanying the figures noted that an average of around 63% of Palestinians between the ages of 15 and 29 — 73% in the West Bank and 56% in the Gaza Strip — want to emigrate, although not permanently.

Ayman al-Aloul, a journalist, was arrested at his home in Gaza on Jan. 3 by Hamas-controlled security forces. Now based in Egypt, he is finding it difficult to decide whether to return to Gaza and live under threat or to remain in Egypt and be separated from his family.

Aloul told Al-Monitor, “I decided to leave after I learned that the security services in Gaza had informed all of the media offices not to deal with me and prevented me from practicing the job that I love, being a field correspondent, their argument being that I was an abstaining employee appointed by the Palestinian Authority.” Aloul said he receives threats on a regular basis on his social networking accounts.

On Feb. 11, 2010, Fathi Hammad, the interior minister for the Hamas government, had issued Decision No. 17, prohibiting abstaining employees from working with charities and nongovernmental organizations or holding paid or unpaid jobs.

Poet Fatena Al Ghorra, who has lived in Belgium since 2008, has her own take on the relationship between Gaza and its intellectuals. “It is not Gaza that repels the elite. It is quite the opposite, as Gaza is probably the place that most generates intellectuals,” she told Al-Monitor. “The city, however, is helpless, as it is under siege and under economic, psychological, social and religious constraints that prevent it from keeping its elite. The relationship is very debatable and hard to analyze. At a time when Gaza made us who we are today, we punished it for something it did not do.”

Ghorra shared her personal experience, saying, “I found myself increasingly suffocating, and I could not take it anymore. We did not leave the city. We left those who are in control of it and those who managed to censure us from within. This cannot be tolerated by innovators to whom freedom is a must.”

In Gaza, what comes from freedom is often interpreted as decay, Ghorra said, adding, “The lack of horizon, the suppression of freedom and the censorship imposed on the people are the reasons that lead innovators to leave.”

Ghorra was well-known in Gaza’s cultural circles, but she could no longer handle the prospect of living in a city ruled by “one thought and one vision.” She added, “I was exposed to multiple pressures and direct threats at times, all of which were factors that led me to leave before I lost my mind or my life.”

For now, Juma, Baalousha, Aloul and Ghorra communicate with their families and followers through social media. They plan to return to Gaza one day, but no one knows when that day will come.