Why Gazan authors are moving to Egypt

Egypt remains the No. 1 destination for Arab authors in general, and Gazan authors in particular, due to its cultural and scientific stature. 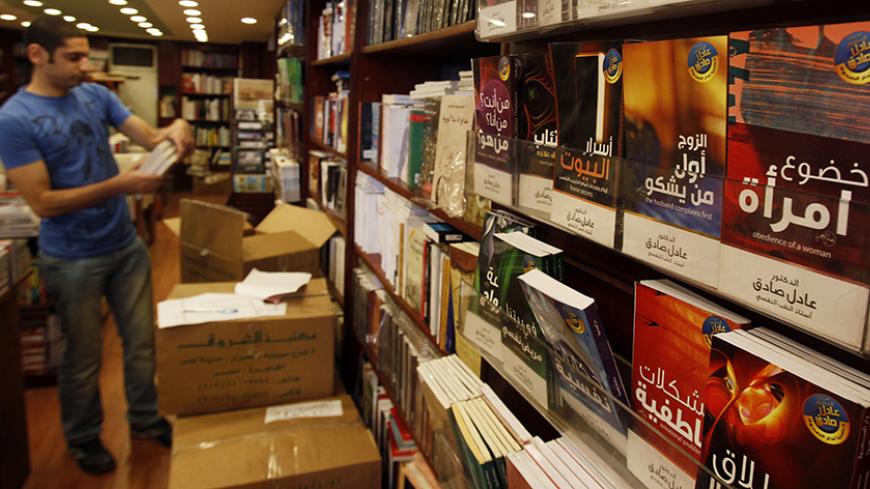 CAIRO — Mahmoud Ramadan is a young novelist who left the Shati refugee camp west of Gaza City in 2008. Looking for a place to publish his writings, he wound up in Egypt. He settled there and has so far published three novels about the situation of Palestinians in the Gaza Strip.

Al-Monitor met with Ramadan in his bookstore, which he opened in early 2016, in the Egyptian 6th of October City. He said he found it best to leave Gaza in 2008 after being imprisoned twice by Hamas because of his views and writings that go against the Hamas movement and its rule.

Ramadan said, “I was studying journalism at the University of Palestine in Gaza and I could not complete my studies to get a degree before leaving. I also worked in online marketing and design. I started writing on my own about my experience and how people lived in the Gaza Strip. I used an alias — Yami Ahmed — and I never mentioned my real name because I wrote about politics and how the ruling party [Hamas] oppressed Gazans.”

Speaking about the books he has published, Ramadan said, “I printed my first novel at my own expense in 2013. It was titled ‘The Remnants of Mary.’ It spoke about the beginning of conflicts and divisions that had emerged in the Palestinian community as a result of the parties’ [Fatah and Hamas] behavior, and how all of this reflected on the Palestinians’ personality who became labeled by their political affiliations.”

He added, “My second novel was published by an Egyptian publishing house called Oktob Publishing House in 2014 under the title ‘I Relate to Your Words.’ It spoke about a man who traveled from Gaza to Egypt and tried to integrate in his new community, but faced culture shock in the Egyptian society. The third novel was the second part of my first; it was published by a publishing house [in Gaza] called Samir Mansour Library for Publishing and Distribution in June 2016 and it spoke about the Palestinian differences and the deepening division as well as detailed incidents of the Israeli war on Gaza in 2009.”

Ramadan noted that Egyptian publishing houses do not agree to deal with Palestinian authors from Gaza so easily. This is why after publishing his latest novel and opening his bookstore in 2016, he partnered up with Egyptian author Adham Abboud and founded a small publishing house in 6th of October City, which they called Bardi Publishing House, to help Palestinian and Arab authors publish their novels and poetry.

Poet Joseph al-Qadra, from the city of Khan Yunis in the southern Gaza Strip, arrived in Egypt in 2011. Sitting in a cafe in central Cairo, he told Al-Monitor that Hamas’ actions and the restrictions it imposes on all levels, including cultural works, pushed him to leave Gaza and look for a more welcoming environment to express his opinion through poetry. This is why he came to Egypt to complete his studies and is now preparing for his doctoral thesis in literary criticism at the Research Institute of Arab Studies in Cairo.

He explained, “I could not stand living in Gaza anymore. I had to get out of there and escape the devastating situation. I decided to travel to Egypt to study and start over. Although my writings were only limited to poetry, I started to write my novel, titled ‘Beautiful Black Book,’ after my experience matured in this unfamiliar place and community.”

Qadra believes that two main reasons often push authors and poets out of Gaza and into the Arab world, particularly Egypt. The first is that the world sympathizes with the cause [represented in the text] rather than the poetry or the novel itself, and people have now lost interest in Gazan authors because their attention has shifted toward Syrian authors who have a more urgent cause. The second reason is that many Gazan authors used to write at the mercy of ruling authorities in Gaza.

He said, “A good text is always worthwhile. However, recently the mere presence in Gaza entailed humanitarian sympathy with the author’s cause and not the text itself. People became less interested in poets and authors in Gaza as their attention shifted toward Syrian poets in light of the Syrians’ urgent cause. In addition, some authors were forced to leave the Gaza Strip because they were writing at the mercy of [Hamas’] weapons, so all that was left for them to do is travel to find publishing opportunities with a wider margin of freedom.”

Author Alaa al-Nahhal came from the city of Rafah in the southern Gaza Strip to Egypt at the beginning of 2016 to achieve her childhood dream of making her novels reach the largest readership base.

She told Al-Monitor, “I did not find an opportunity to publish my work in the Gaza Strip under the siege. People prefer to buy their basic needs instead of spending money on books to read. However, this never stopped me from practicing my hobby and sharing it with people. I first used Facebook to post my work, and then I participated in poetry competitions in Gaza and in Egypt.”

Nahhal’s work was first published in 2014 in a book that combined stories written by several Arab female authors titled “Girl Talk.” Her work was also published in the second and third parts of the same book. She participated in the 2016 International Book Exhibition in Cairo.

Palestinian poet and literary critic Raed Kodeih, who has been living in Cairo since 2012 and serves as vice president of the Egypt Arab Salon Union, told Al-Monitor that Egypt is home for every intellectual Arab author, noting that he, much like many Arab authors, chose to move to Egypt because it is the beacon of science and culture in the Arab world.

Kodeih, who also works as director of public relations and media in Dar el-Nokhba for Publishing and Distribution in Egypt, stressed that through his union, he tries to adopt and take in Arab poets and authors, including Palestinian authors who travel to Egypt to publish their creations.

Egypt remains the No. 1 destination for Arab authors in general, and Gazan authors in particular, due to its cultural and scientific stature, which help artists achieve their ambitions in the world of poetry and literature.