Palestinian officials have widely denounced a Palestinian militant’s threat against US nationals in the Gaza Strip after the US government added Hamas leader Fathi Hammad to its terror list. 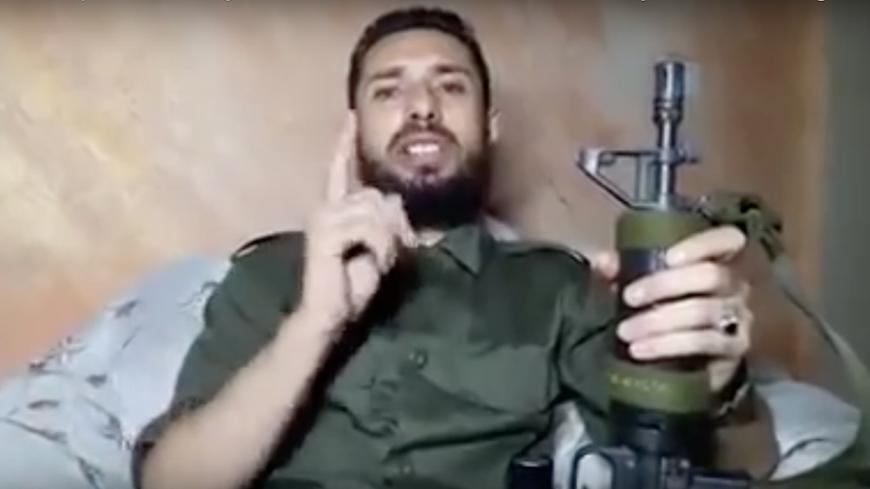 A still from a video in which a leader of al-Nasser Salah al-Deen Brigades threatens US citizens who might enter the Gaza Strip, Sept. 16 2016. - YouTube/Alaa Buhaisi

GAZA CITY, Gaza Strip — On Sept. 16, the US State Department added Hamas leader and former Interior Minister Fathi Hammad to its global terror list. The State Department said in a press release that Hammad engaged in terrorist activities including coordinating terrorist cells as interior minister in the Hamas government and establishing Al-Aqsa TV, which broadcasts children's programs urging them to become armed fighters in the future.

In response, a Palestinian gunman who identified himself as a leader in al-Nasser Salah al-Deen Brigades, the Popular Resistance Committees' military wing, posted a video online on the same day, threatening any American nationals who might enter the Gaza Strip. His statement was quickly denounced across the board.

The gunman, who did not give his name in the video, said, “We, as leaders of al-Nasser Salah al-Deen Brigades, condemn the American statements that side with the Zionist enemy against Fathi Hammad, the leader of the liberation movements in Palestine.”

He added, “We warn Americans against entering the Gaza Strip because they are no longer welcome following this decision, and we demand the American people pressure the US government to retract the decision so we do not have to expand the conflict outside of occupied Palestine.”

On Sept. 18, Eyad al-Bozom, the spokesman for the Ministry of Interior, stressed the ministry's commitment to ensuring security and providing protection to all foreign nationals visiting and residing in the Gaza Strip, adding that it would not allow anyone to threaten the security and stability of Gaza or any citizens or foreign nationals, whatever their nationality.

Bozom continued, “The ministry has taken all appropriate legal measures against the person in the video," who was summoned and questioned before being released. "The threats made by this person affiliated with a resistance faction are unacceptable and illegal.”

Speaking to Al-Monitor, a spokesman for the Popular Resistance Committees identifying himself as Abu Mujahid denied any affiliation with the person in the video. He noted that no member of the organization has made any official statements against foreign nationals in Gaza. “The way we see foreign nationals is very clear: They did not come [to Gaza] as fighters, but rather to help our people in exposing how Palestinians are suffering under the siege imposed on the Gaza Strip,” he said.

However, he condemned the US decision to add Hammad to the terror list, saying that the move is intended to distort the image of the Palestinian resistance and increase the already blatant pro-Israel bias.

In an interview with Al-Monitor, Kayed al-Ghul, a leader of the Popular Front for the Liberation of Palestine, denounced any threats made against foreign nationals in Gaza. He said that many foreigners work with international organizations such as the United Nations and the United Nations Relief and Works Agency that provide aid to the Palestinians.

Ghul explained, “The mistake by the United States to add Hammad to the terror list cannot be fixed with another mistake. We need to preserve Gaza’s image by showing that it respects and protects all foreigners, so the world will not see us as the Islamic State.”

He also denounced the US decision to add him to the terror list, describing it as flagrant interference in internal Palestinian affairs that shows just how unfair the United States is toward the Palestinians who are resisting those occupying their land. He added that the successive US administrations since 1968 continue to stand by Israel by providing money, weapons and diplomatic and political support while Israelis kill Palestinians and steal their land.

The director of the Carter Center in Jerusalem, American national Nathan Stock, visits the Gaza Strip often. He told Al-Monitor, “The general security situation in Gaza is good. We are not faced with any problems or threats.” He explained that he heard about the warning for Americans against entering Gaza through friends.

Stock believes that the threat poses no real problem because it is not serious. He said he meets with civil society organizations and Palestinians in Gaza to discuss their situation and needs in order for the center to prepare and publish reports. Stock stressed that he will continue to frequent Gaza, where he stays for several days during each monthly visit.

Palestinian journalist Badr Ibrahim told Al-Monitor, “The threat does not pose a serious risk, as the security services in Gaza and even the factions condemn any violations against foreigners in Gaza and provide them with protection.”

He added, “I have worked with a lot of Americans. Some were journalists who covered the wars on Gaza and some were reporting in quieter times, and they never felt that their lives were threatened. On the contrary, they sympathize with the people of Gaza, who are victims of the Israeli blockade and the successive wars.”

For decades, it has been exceedingly rare for American nationals to be attacked in the Gaza Strip. One American car escorting a US diplomatic convoy was bombed as it left the Erez crossing in the northern Gaza Strip on Oct. 15, 2003, killing three security officers in the convoy. No Palestinian party claimed responsibility for the attack.