Why plans for new stadium are sparking controversy in Egypt

Egyptian President Abdel Fattah al-Sisi's call for a new stadium to be built in the city of Port Said has drawn criticism, with some accusing the government of attempting to erase the memory of the deadly riot that occurred at a soccer match in the city in 2012. 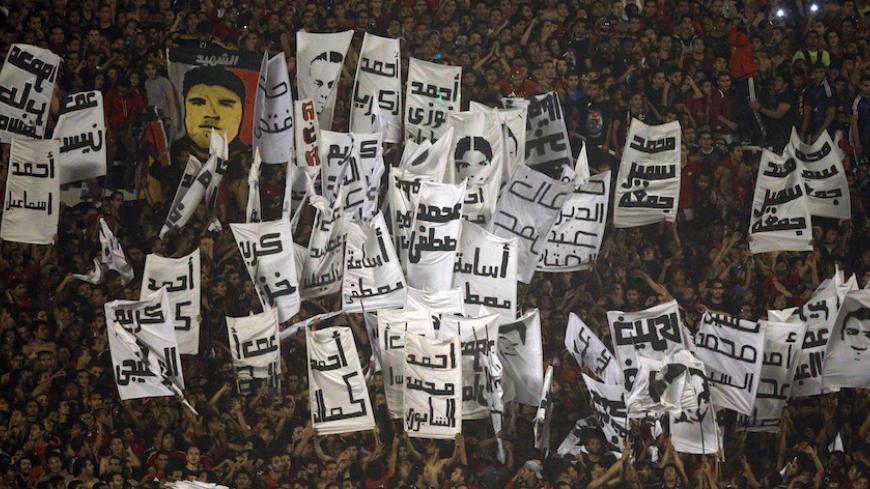 During a meeting with Minister of Youth and Sports Khaled Abdul-Aziz on Aug. 20, Egyptian President Abdel Fattah al-Sisi issued instructions for conducting a study on the construction of a new stadium in the city of Port Said to provide distinguished sports services to the people of the province.

The president’s step seemed surprising, especially since Port Said is one of Egypt’s least-populated governorates (home to about 686,000 people) and already has one large stadium. Moreover, the construction of a new stadium in the city was not within the list of projects submitted by the sports minister at the Egypt Economic Development Conference in Sharm el-Sheikh in March 2015, which discussed the construction of stadiums in the governorates of Matrouh, the Red Sea, South Sinai and Luxor, among others.

Sisi did not specify an exact date for the completion of the new stadium, according to Ali Abu Samra, the head of the Youth and Sports Directorate in Port Said. Abu Samra told Al-Monitor that the directorate has prepared a list of several sites suitable for construction, noting that construction is unlikely to be completed before at least five years.

Abu Samra does not see the new stadium in the city as an attempt to cover up the effects of the 2012 riot that erupted in the current stadium or as an additional luxury for the people of Port Said, but rather as a necessity — especially in light of the poor state of the current stadium, which is in need of urgent renovation and upgrading. He predicted that all sports activities, in particular games of Port Said-based Al-Masry soccer club, will be transferred to the new stadium upon its completion.

On Feb. 1, 2012, 72 soccer fans from Al-Ahly's biggest fan group, known as Ultras Ahlawy, were killed following a soccer match against Al-Masry. Media outlets described the riot as the Port Said Stadium massacre, since sports riots in Egypt had never before resulted in such a large number of victims.

Fifty-four months have passed since the massacre and Sayyed (a pseudonym) still blames himself for not helping out his friend Hamid Fathi, one of the victims of the riot. He wished he had not left his friend’s side on that day, when hundreds of Al-Ahly fans rushed hastily for the only exit gate to the stadium.

Sayyed, an Ultras Ahlawy group member, told Al-Monitor on condition of anonymity that he fears being prosecuted by security agents, accusing them of lurking around for any opportunity to harass Ultras Ahlawy group members. He said that the violence he and his friends faced in the Port Said stadium is still fully engraved in his mind and will remain so, even if Al-Masry games move to a new stadium.

The public prosecution’s investigations into the case led to murder charges against 64 civilians, while nine security leaders in Port Said governorate were accused of facilitating the entry of the defendants to the site and refraining from executing their duties imposed by the constitution and the law to maintain order and public security, protect lives and properties, and prevent crimes.

On March 9, 2013, the criminal court of Port Said issued a decision sentencing 21 defendants to the death penalty and five to life imprisonment. It also sentenced to 15 years in prison six other defendants, including the city’s former security chief, Essam el-Din Abdel Hamid Samak, and Col. Mohammed Saad, who was in charge of securing Al-Ahly fans' exit gate. The court acquitted seven security officials, including Maj. Gen. Abdul Aziz Fahmy, the director general of the Central Security Forces in Port Said.

Sayyed believes the acquittal of seven out of the nine security officials indicates that the investigation authorities and the state are not taking this case seriously, recalling major protests organized by the Ultras Ahlawy groups before and after the trial to object to the acquittal of security officials and the prosecution of Al-Masry fans only.

Al-Monitor spoke by phone with Samah Sayed, the mother of Karim Ahmed, one of those killed in the riot. She expressed her dissatisfaction with the outcome of the case and said she was shocked to see only two security officials being convicted and imprisoned for only five years, while the rest were acquitted. She noted that after each trial stage, she gradually lost confidence in Egyptian authorities, including the judiciary.

Speaking about the construction of a new stadium for the city and the possible transfer of sports activities to this new stadium, Sayed said she is convinced that state officials are only taking decisions related to the Port Said stadium sports riot to definitively close this case and get things back to the way they were before the January 25 Revolution.

She said state officials see sports competitions as a mere tool to distract the Egyptian people, especially youths, from public affairs, stressing that the only ones thinking about what must be done for the legacy of those who died are the victims’ families and friends and Ultras Ahlawy group members.

Mahrous Yousef, the father of Mohammed Mahrous, who was killed in the riot, also believes the Egyptian administration is trying to close the case with minimum sanctions being imposed on security officials.

He told Al-Monitor, “In the beginning, the attorney general decided to ban publication of the case, and today there is a plan to construct a new stadium. The decision to ban publication in the case gradually draws attention away from the case, despite the interaction of local attention focused on the event when it occurred.”

As years pass by, and given the change of Al-Masry’s stadium, future generations will forget all about the massacre in the old stadium, Yousef said.

The case is not closed yet, and the decision may change after the examination of the challenges lodged by the defendants. A hearing was set for Oct. 17 to examine these challenges.

Ashraf al-Ezbi, an attorney representing those accused of instigating the riot, said he expects the sentences to be attenuated and the case to be closed without any death sentences being issued against any of the defendants.

He told Al-Monitor that the Court of Cassation will reconsider the challenges more objectively, especially that of one of the defendants, Hasan al-Majdi, who was sentenced to death. According to Ezbi, Majdi is a fan of Al-Ahly club and was present among the club’s fans at the time of the riot.

Ezbi pointed out that despite the tragedy, what happened was just an accident. He explained that Al-Ahly fans dashed for the exit door, which was the leading cause of death, and there is no proof that the accident was planned or orchestrated by a third party.

He also rejected the prosecution's accusation against some of the defendants of using batons and sharp tools to kill members of the civilian audience, saying that forensic medical reports proved that the victims sustained bodily injuries but did not prove the use of weapons.