The Ultras, decisively active during the protests, are now being blamed by some in the media for contributing to chaos in the country. 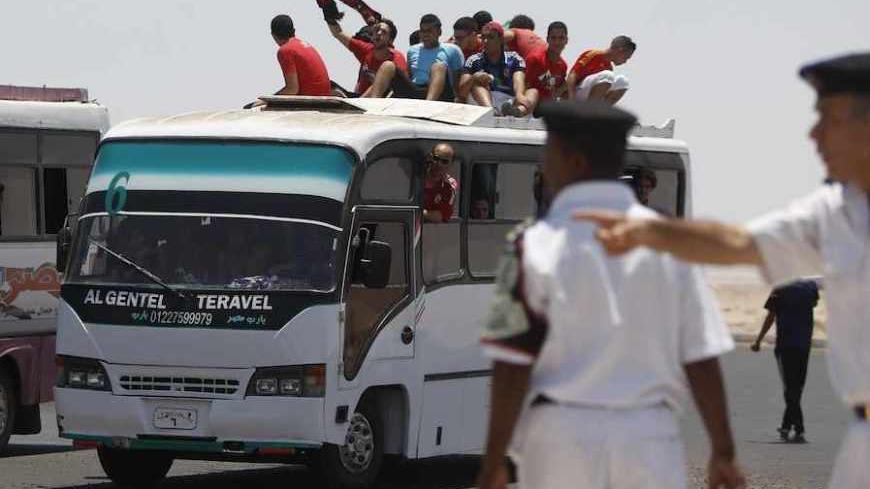 Until a few years ago, it was common to say that Egypt’s political problem was that the two organized parties with the highest popularity were Al-Ahly and Zamalek, the country’s most prominent sports clubs, which also field the biggest football teams.

In 2007, Ultras Ahlawy (UA-07) officially emerged as a fan club, raising its banner for the first time at a match in which al-Ahly played against ENPPI. According to Mohamed G. Bashir, who has authored the only Egyptian book about the group, the Ultras’ core sense of purpose lies in the unwavering support of their team, whether winning or losing. Ultras members come from various socioeconomic backgrounds and are not organized along political lines, but, by their very nature, exude a culture of anti-authoritarianism — against the media, police, club managers, the Football Federation and more. While bitter critiques of the commercialization of “modern football,” and disillusionment with official fan groups formally organized by the clubs, are key reasons for the Ultras' emergence, they may have also been looking for a homeland to which to proudly belong. Ultras Ahlawy’s slogans — “We are Egypt” and “The Greatest Club in the World” — illustrate that in each other and in their devotion to their club, they have found that missing sense of nationhood.

There are conflicting stories about whether the Ultras had become involved in the political scene before January 2011. Although they released a statement that they would not participate as an organization in the developing revolutionary movement, they left the door open for individual participation. A number of activists contacted the Ultras, calling on them to take part , and on Jan. 22, 2011, a video appeared on YouTube, posted anonymously, assuring those committed to demonstrating on Jan. 25 and those fearful of police brutality and repression that there would be a squadron capable of defending them on the streets. The video showed images of clashes between Egyptian groups, in particular al-Ahly and Zamalek fans, engaged in fights with the police. Perhaps the choice of Jan. 25, National Police Day, as the D-Day for the revolution decided it for the Ultras, who have irreconcilable grudges with the police. A universal Ultras sentiment is “All cops are … ” (ACAB), well, not very good people.

The Ultras undeniably played an important role in the revolution. The revolutionaries relied on the Ultras in decisive standoffs, such as the Camel battle and the Mohamed Mahmoud clashes. During the cabinet clashes, Karika, an Ultras member, was killed by security forces. In the following football match, the Ultras chanted against the rule of the Supreme Coucil of the Armed Forces. A couple of weeks later, the Port Said massacre took place, in which 74 members of Ultras Ahlawy were slaughtered by al-Masry fans as the police stood by doing nothing. The Ultras immediately accused the police of staging or at least allowing the massacre to take place to take revenge against the Ultras, who had played an important role in defeating the police on the Day of Rage, Jan. 28, 2011.

The Egyptian revolution has sometimes been used to settle old scores and take revenge for past abuses. Now, Egyptian conservatives and statists are taking their own revenge. From the very beginning, many activists did not realize that the peaceful style of the revolution reflected the nature of the Egyptian people. Egyptians called upon the army in January and February 2011 to take charge of the transition process because they wanted it to be orderly. People wanted change, but they wanted change for the better, not a chaotic unknown. Some radical revolutionaries and overzealous activists, however, wanted to attain their own glory and thought the way to do that was through bloody confrontations as often as possible. They overdid it, with little strategic awareness. They used the revolution the way action-crazed kids use bumper cars — to get an adrenaline rush.

Many Egyptians watched and disapproved of the clashes staged near strategic army and police facilities. Some condemned police brutality, but most people blamed the activists and accused them of irresponsible behavior. In fact, this is one of the reasons the Muslim Brotherhood earned so many votes in 2011 and 2012. Theirs seemed to be the party that would vocally oppose such clashes and call for calm, accusing activists of staging politically fruitless confrontations that hurt the economy and undermined a return to normalcy.

After the Port Said massacre, the Ultras emerged as an overtly powerful political force. They waited for a year for justice in the courts, and when they felt that they did not get it, they decided to take matters into their own hands. The courts sentenced 21 people to death, mainly civilians from among Port Said al-Masry fans. As most of the police “accomplices” got away with light punishments or none at all, the Ultras began to put pressure on the authorities. They stormed into the Football Federation and torched the Police Officers Club in demanding justice for their comrades.

There are accusations that the Muslim Brotherhood managed to infiltrate Ultras Ahlawy while Hazemoon (Hazem Abu Ismail’s fans) worked on the Zamalek fans (the White Knights). It was unlikely that such attempts would be successful for the simple reason that the Ultras have always made it clear that they wanted to stay out of politics. For instance, while the biggest Ultras-related page supporting deposed president Mohammed Morsi has only 37,000 likes, the Facebook page for Ultras Ahlawy has more than 918,000 fans, 25 times as many. Apart from the common cause of hating the police and demanding justice for their murdered comrades, the Ultras initially did not want to be a part of the political game. Their focus remained on supporting their team with the most creative cheering at games.

Several more incidents have recently taken place. At Cairo International Airport, several Ultras were arrested in October on charges of illegal use of fireworks, disturbing the peace and resisting arrest. They were released only last week, after paying aviation authorities for damage to airport facilities. Clashes erupted again between the police and the Ultras before al-Ahly’s game in the Africa Cup of Nations final. Police accused the Ultras of breaking into the stadium and destroying the gates. The Ultras deny the charges.

On Nov. 13, 12 Muslim Brotherhood–affiliated students accused of storming al-Azhar’s headquarters received harsh jail sentences of 17 years in prison. It seems that the Egyptian state is intent on prosecuting those seen by authorities as subversive and seeking to destabilize the country, to the maximum extent of the law.

During the early days of the revolution, it was okay, even cool, to stand up to authority, even to go on the offensive against the police. Often, the Ultras were cheered on and treated like heroes for their bravery. Now, however, an Egyptian population fatigued by endless clashes no longer has the patience for this, and the authorities know it. The Ultras are now coming under attack and discovering that things have changed. They are being blamed by the media and the public for dragging the country into chaos. Is it just the Ultras who face this situation or are they part of a broader campaign against all Jan. 25 activists, who are now blamed for every problem Egypt faces?