Prime Minister Benjamin Netanyahu has stated that he is willing to meet Palestinian President Mahmoud Abbas, but then quickly released a video clip accusing those who call for the evacuation of the settlements of supporting ethnic cleansing. 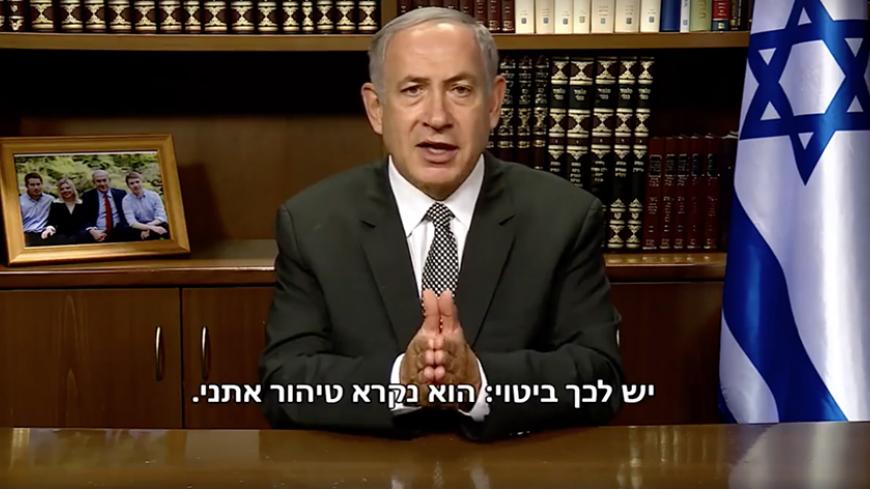 A still from a video released on Israeli Prime Minister Benjamin Netanyahu's Facebook page in which he equated evacuating Jews from the West Bank with “ethnic cleansing,” Israel, Sept. 5, 2016. - Facebook/@Netanyahu

On many occasions, Israeli Prime Minister Benjamin Netanyahu has shown an impressive ability to navigate conflicting messages and play both sides. He set new records last week when he announced that he wanted to renew negotiations with the Palestinians, and then just a few days later on Sept. 9 posted a video to Facebook equating evacuating Jews from the West Bank with “ethnic cleansing” by the Palestinians.

On Sept. 5, Netanyahu met in his office with Russian Deputy Foreign Minister for Middle East Affairs Mikhail Bogdanov, who was visiting the region to promote a peace summit in Moscow. At the meeting, the prime minister made it very clear that he was willing to meet with Palestinian President Mahmoud Abbas and to renew negotiations with him without any preconditions.

The next day, Netanyahu flew to the Netherlands on a diplomatic visit. At a press conference with Dutch Prime Minister Mark Rutte, Netanyahu repeated what he told the Russian envoy: “I have said this hundreds of times and I am reiterating it now. I do not care about the place, be it in Holland, Moscow or anywhere else — this is not a problem, and it certainly could be in Moscow. I have said this to President [Vladimir] Putin. I said this on Sunday to his envoy Bogdanov.” He also claimed that Abbas is refusing to relaunch negotiations without preconditions.

Set against the background of Bogdanov’s visit to Jerusalem and Ramallah, the opposition chair, Zionist Camp leader Isaac Herzog, was encouraged by these statements. Ever since the 2015 election, Herzog has been engaged in lengthy negotiations of his own with Netanyahu about joining the government. These negotiations have had their ups and downs. Herzog considered Netanyahu's statements as a positive signal, indicating that the diplomatic process could be rising from its slumber with the possible summit meeting in Russia. This also coincides with what Herzog has allegedly heard privately from Netanyahu in secret talks that Herzog fervently denies took place.

Within the Zionist Camp, other Knesset members also want to believe, like Herzog, that Netanyahu really is interested in engaging the Palestinians in a serious round of negotiations. Netanyahu is displaying his talents at their finest. He knows how to make his dialogue partner believe that his dreams are about to come true. In Herzog’s case, Netanyahu talks about taking advantage of a rare opportunity to work together with the moderate Arab states to advance the Palestinian diplomatic track. When Herzog hears such words, he thinks about his own political revival. He envisions himself serving as foreign minister of a government that promotes a historical diplomatic process. Even if this scenario comes to fruition, the Zionist Camp chair is still on the clock. The clock is ticking down to the Labor Party primaries, and he could find himself out of a job in just a year.

Despite his weak image, Herzog is a clever and experienced politician who has shown acute survival skills and the ability to withstand political travails from within his own party over the past few months. Some people tend to forget lately that Herzog is also an appreciated Israeli statesman worldwide, much more than Yesh Atid chair Yair Lapid or Defense Minister Avigdor Liberman. Last January, Herzog went on a diplomatic visit to Paris, where he met with President Francois Hollande and presented to him his separation plan. In July he met with some of President Barack Obama's top advisers. The Arab world considers him a moderate figure. Egyptian President Abdel Fattah al-Sisi even expressed hope in a speech last May that adding Herzog to the coalition would jumpstart the Israeli-Palestinian peace process.

Herzog has given Netanyahu chance after chance, hoping that he will deliver, and time after time he has walked away disappointed. The climax came with Liberman's appointment, bolstering its right-wing nationalist element with the Yisrael Beitenu chair.

Nevertheless, Netanyahu has apparently managed to continue to maintain a line of communication with Herzog, giving him hope that he will soon bring the Zionist Camp into his government to replace HaBayit HaYehudi and then move forward toward a diplomatic breakthrough.

It would be interesting to learn what Herzog felt when he saw the video clip in which Netanyahu equated that the demand that settlers be evacuated from the West Bank with ethnic cleansing, or when he heard the wave of international condemnation that followed Netanyahu’s statement.

In that video clip, Netanyahu positioned himself yet again as the person who knows how best to defend the interests of Israel. “I’m sure many of you have heard the claim that the Jewish communities in Judea and Samaria, the West Bank, are an obstacle to peace. I've always been perplexed by this notion. Because no one would seriously claim that the nearly 2 million Arabs living inside Israel — that they're an obstacle to peace. That’s because they aren’t. … Yet the Palestinian leadership actually demands a Palestinian state with one precondition: No Jews. There's a phrase for that: It's called ethnic cleansing. And this demand is outrageous."

Netanyahu released this media bombshell just two hours before the start of the Sabbath. The clip was filmed that morning in a special room off the prime minister’s office, and its internal political objectives were clear. The prime minister was bothered by a poll that showed Lapid’s Yesh Atid currently attracting more votes than Netanyahu’s Likud and by reports of the ongoing police investigation into his affairs, so he did what he does best: He looked straight into the camera and showed Lapid, who is waging his personal battle against the boycott movement, that he is better at protecting Israeli interests in English. In this particular case, it was important for Netanyahu to overshadow Liberman and Education Minister Naftali Bennett as the defender of the settlements, so he pushed the issue to the limits with a controversial statement.

The rapid and forceful response by the US State Department that Netanyahu’s comments were “inappropriate” and “unhelpful” only helped Netanyahu in his efforts to put the brakes on the Likud Party’s loss of seats in the polls.

Herzog responded to the video clip the next day at a Sabbath event in Tel Aviv. His response was restrained, likely because of other things that he has been hearing from the prime minister in their private conversations. “Netanyahu’s remarks eliminate the approach of keeping the settlement blocs, which is the only approach capable of promoting the vision of a two-state solution.”

Herzog will be forced to make important decisions, at least until the Knesset begins its winter session at the end of October. Should he continue to believe Netanyahu, or is it time to look reality squarely in the face and fight to win back those voters who have abandoned the Zionist Camp for Yesh Atid? That is the only way he will be able to keep his position as Labor chair.