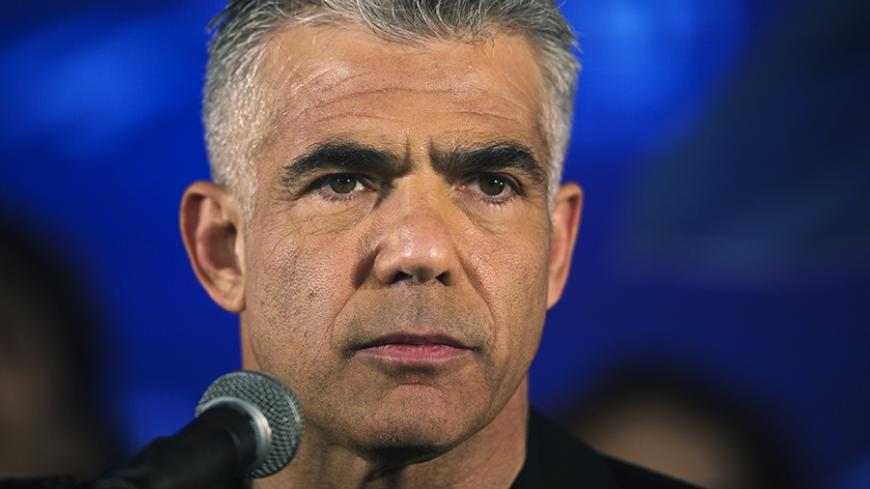 Yair Lapid, head of Yesh Atid, speaks to supporters during a conference in Holon near Tel Aviv, March 12, 2015. - REUTERS/Amir Cohen

On July 13, the day that preceded the signing of the nuclear agreement between Iran and the superpowers, Prime Minister Benjamin Netanyahu wasn’t the only Israeli leader to brace himself for the blow. So did the heads of the two largest opposition factions, Zionist Camp leader Isaac Herzog and Yesh Atid head Yair Lapid.

Ever since the current government was formed, Herzog and Lapid have been fighting for recognition as influential players who can contend with Netanyahu in the diplomatic and security spheres. Now they have finally been given a chance to lash out at the prime minister in the area that he practically dominates. Because they are locked in an open struggle over who is the senior opposition leader — who ultimately sets the tone — they have been particularly aggressive in their campaign against Netanyahu.

It soon became clear that Herzog and Lapid adopted the same media strategy in response to the signing of the historic agreement: They both blamed Netanyahu, claiming that his terrible relationship with US President Barack Obama was the main reason that the United States had succumbed to a bad agreement, which would put Israel at risk. They both identified Netanyahu's weak spot and competed among themselves over who would attack Netanyahu more forcefully.

The opening salvo in Herzog's and Lapid’s Iranian campaign could be heard in their party meetings as early as the afternoon of July 13, a day before the agreement was actually signed. Herzog went on the attack saying, “It is inconceivable that we reach this fateful moment with zero influence on the agreement that is taking shape. This is solely the result of Netanyahu’s personal failure, having favored his own political victory over our relationship with the United States and Israel’s security interests.” He added, “Netanyahu will pay for all the mistakes he made in managing this crisis.”

Lapid launched his own vehement attack almost simultaneously. He said, “Netanyahu is to blame because of his miserable relationship with the Obama administration. Benjamin Netanyahu shouldn’t be the one to lead these efforts against the agreement. … He takes all the credit for this failure.”

While these opposition attacks inevitably made headlines, they turned out to be a tactical mistake. Lapid and Herzog both looked like they were engaging in petty politics, while the prime minister was left on his own to take on the rest of the world, and, in particular, the Iranian nuclear threat, even as the Iranians were celebrating victory in the streets of Tehran. The Israeli public prefers statesmanship when facing diplomatic and security crises. They always have. Though Herzog and Lapid usually recognize that, on this particular occasion, they played right into Netanyahu’s hands; they went overboard in the intensity and timing of their attacks.

Hence, within a day, the leaders of the Zionist Camp and Yesh Atid changed their approach. They both dropped their internecine spats and appeared before the international media to explain why Israel opposes the agreement. Whether intentionally or not, Herzog and Lapid were both practically quoting the Netanyahu government’s talking points.

“I am enlisting to do everything for the security of the State of Israel in the new situation that has been created. I will be leaving for the United States in the coming days to demand a dramatic package of security measures for Israel,” Herzog said July 14, after the agreement was signed. He added, “Despite our debates, despite the scores that have yet to be settled over how the prime minister managed the situation and the decisions that he made, I informed him an hour ago that since we are a responsible opposition, we are enlisting ourselves to the cause at this very moment in order to promote Israel’s security.”

At the same time, Lapid's media consultants reported that he had launched a campaign of his own to explain Israel’s position to the foreign press. “We thought it was a bad deal, but it is in fact a terrible deal. This agreement allows Iran to continue developing nuclear weapons, only this time with the help of the international community,” he said.

Unlike Herzog, Lapid continued to attack Netanyahu, describing the agreement as “the largest failure of foreign policy of any Israeli prime minister since the establishment of the State of Israel.” Nevertheless, he also made a point of saying later, “When I speak in English, I will support the government.”

Former Prime Minister Ehud Barak, who seems to be inching his way back into politics as a potential leader of the center-left, chose from the outset the right tactic, unlike the two opposition leaders. Sitting in the TV Channel 2 studio, he adopted a calm tone as he explained to the public that even the worst possible scenario of a nuclear Iran would not be the end of the world, because Israel is a military power. Even Avigdor Liberman, the chairman of Yisrael Beitenu who doesn’t normally forgo an opportunity to rip Netanyahu to shreds, recognized that when it comes to the nuclear issue, restraint really does pay.

Netanyahu proved yet again that he knows how to play the hand that he was dealt, even when it seems to be to his disadvantage. When he delivered his official response to the agreement in somber tones on the night of July 14, Netanyahu sounded as if he already was well aware of exactly what cards he held, including all their strengths and weaknesses in this situation. After detailing his personal contributions to hindering the Iranian nuclear program over the past few years, he accused his political rivals of pettiness. “Right now we have one task: to ensure that [Iran] does not obtain nuclear weapons at some later date. At this time, I call on all of Israel's leaders to set aside petty politics and to unite around the most fateful issue for the security of the State of Israel.”

Later that night, Netanyahu met with Herzog to update him on the same summaries of the agreement’s implications that the diplomatic-security Cabinet received just hours earlier. The mood at the meeting was good. The bottom line was that on this particular issue, the national interest as both men see it should outweigh their political rivalry. It is possible that Netanyahu considers Israel’s anxiety over the nuclear agreement with Iran as an opportunity to advance a common agenda shared by him and Herzog, and thereby bring the Zionist Camp into the government. This scenario received further backing on the morning of July 15, when the chair of the Meretz Party, Knesset member Zehava Gal-On, told Israeli Army Radio unequivocally, “To the best of my knowledge and understanding … the Zionist Camp is on its way into the government, if not next week, then two weeks from now.” Herzog’s party denied this.

One other option available to Netanyahu is to bring Liberman and Yisrael Beitenu into his coalition. People within Netanyahu’s circle say that despite Liberman’s firm position against Netanyahu, especially over the past few months, he could always surprise everyone by joining the coalition. Those same insiders cited several recent instances in which Liberman actually did cooperate with the government. In fact, it is possible that the Iranian crisis is what will ultimately save Netanyahu from his narrow coalition — 61 Knesset members, out of 120 — which has placed severe limitations on his ability to maneuver in the Knesset.