Despite predictions that the coalition will break up in the coming months, Israeli Prime Minister Benjamin Netanyahu feels confident that he can get the budget approved at the Knesset, at which time perhaps opposition parties might join the coalition. 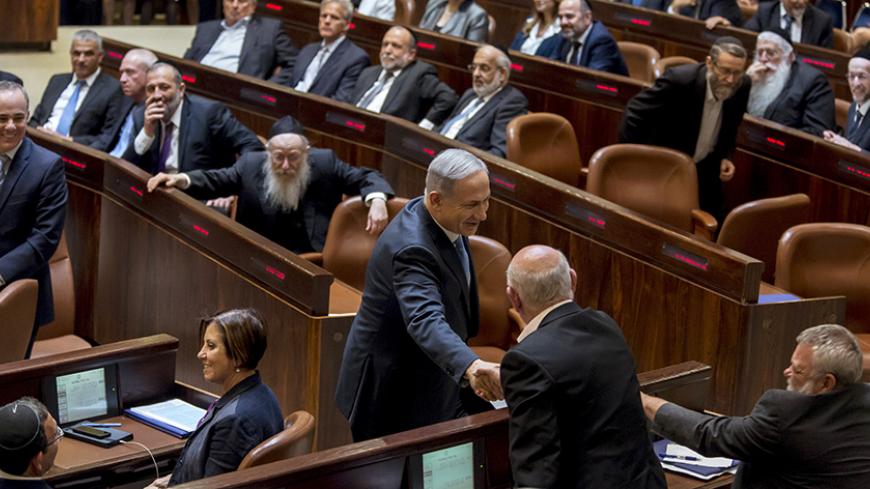 Israeli Prime Minister Benjamin Netanyahu (C) shakes hands with members of the opposition after he was sworn in as prime minister for the fourth time, at the Knesset in Jerusalem, May 14, 2015. - REUTERS/Jim Hollander

Prime Minister Benjamin Netanyahu will be flying to Italy for diplomatic talks at the end of August. While there, he will also be paying a visit to the Israel pavilion at Expo 2015, a foremost international event. The Israeli exhibition, called “Fields of Tomorrow,” features advanced technology to provide the world with healthy food. Against this impressive backdrop, in a chilly pavilion that offers a sharp contrast to the Middle East’s August heat, Netanyahu plans to talk about the enormous opportunities that the Israeli economy offers foreign investors.

Almost immediately upon his return home, the state budget for 2015-16 will be submitted to the Knesset. (The 2015 budget is being submitted only in August due to political infighting and the March 17 elections.) Netanyahu will then go oversees again, this time to London, for talks with British Prime Minister David Cameron. Once in London, he will likely hop over to Berlin for a meeting with German Chancellor Angela Merkel. These talks will focus on the Iran nuclear deal, shortly before it is brought before Congress for approval on Sept. 17.

After spending the Jewish New Year (Sept. 13-14) in Israel, Netanyahu is expected to fly to New York to attend the annual meeting of the UN General Assembly. Once again, he will warn the world of the dangers posed by a nuclear Iran in what is bound to be another attention-grabbing speech. During his visit to the United States, Netanyahu might also meet with President Barack Obama, with whom he has been on a collision course for a long time.

Netanyahu hasn’t left Israel since his fourth government was sworn in, apart from a quick jaunt to Cyprus at the end of July. As each and every member of his 61-seat coalition, which has a majority of only one Knesset member, the prime minister is also under “curfew” and unable to leave the country, to avoid losing any votes in the Knesset. But now that the government approved his budget and he enjoys a degree of political stability, Netanyahu can leave the country to get some fresh air overseas. The Knesset is on its summer recess for three months, so Netanyahu is safe for now. The big question is what will happen after the summer break. Will the furious predictions of top opposition leaders Zionist Camp head Isaac Herzog, Yisrael Beitenu party head Avigdor Liberman and Yesh Atid head Yair Lapid that the current government will fall apart by early 2016 turn out to be accurate, or were those predictions just wishful thinking?

A source close to Netanyahu told Al-Monitor, on condition of anonymity, that the prime minister is in high spirits now that the government approved the state budget. In all likelihood, that budget will be approved by the Knesset as well, ensuring the coalition’s survival for another year. The same source said that Netanyahu believes his coalition partners — Ministers Naftali Bennett, Moshe Kahlon and Aryeh Deri — have no desire or reason to pull apart the coalition less than one year after the last elections. And so, the prime minister thinks that the most reasonable scenario is that the major political players will reassess the situation over the next few months and engage in some kind of soul-searching. For his part, Netanyahu will have to use that time to consider ways to expand his coalition once the budget is approved by the Knesset.

The most intriguing potential coalition candidate is former Foreign Minister Liberman. Though Liberman has made the current government his punching bag on a daily basis, he is, nonetheless, the most natural partner to join the right-wing government. Had he not knocked over the playing board in a surprise move at the very last minute of the coalition negotiations — announcing that he won't join it — he would certainly be the current foreign minister. It also seems as if Liberman’s diatribes against Netanyahu, delivered from every available platform — interviews, speeches and social networks — have been escalating, making the rift between him and Netanyahu much harder to heal.

All of the above is compounded by Yisrael Beitenu’s entanglement in a corruption scandal under police investigation. Nevertheless, the possibility of Liberman joining the government once the budget is approved is hardly some fantasy. Liberman is not Herzog, who would have to convince his party’s ruling bodies and fight internal opposition if he attempted to join the coalition. In contrast, Liberman is the sole decision-maker. In other words, it would take him just a day to bring his party back into the coalition, and then he would go directly back to the Foreign Ministry. This scenario is based on the assumption that once the budget hurdle is passed, Liberman will realize that he is about to spend at least another year in the opposition and change course. He would have no problem coming up with a public excuse for joining the government. He could say that he was saving the right-wing government, claim that the country was facing an emergency — diplomatically and/or military — and point to various civil achievements on behalf of his electorate.

One political source who worked closely with Liberman in the past told Al-Monitor that it is hard to predict what he will do. He always holds his cards close to his chest and enjoys adding a dose of the unexpected into politics. Another example of this was his decision not to join Ehud Olmert’s government in 2006. Liberman walked away from those elections with an impressive 11 seats. He then engaged Olmert in intense coalition negotiations, which ended with him getting what he wanted, but he still decided to stay out of the coalition. Then, less than one year later, he found reason to join (the Iranian threat), was appointed minister of strategic affairs and told a press conference, “We will leave the jabs aside and get to work.”

Liberman could gain from joining forces with Netanyahu again, since he will be returning to a position of influence in the government. More importantly, however, he will avoid serious electoral damage on the right, based on future accusations that he let a left-wing opposition including the Zionist Camp, Yesh Atid, Meretz and the Arab List bring down a right-wing government.

As far as Herzog is concerned, senior members of the Zionist Camp still claim that despite all of his comments about how bad Netanyahu’s government is, he is still interested in joining the coalition and being appointed foreign minister. Herzog knows that joining the coalition will reduce the chances of him having to compete against former party chair Shelly Yachimovich or even former chair Amir Peretz in party primaries any time soon. Furthermore, while Herzog denied that he held private meetings with Netanyahu at the beginning of August at the home of film producer Arnon Milchan in Herzliya, anyone familiar with the dynamics of these intimate meetings, and with Milchan’s behind-the-scene efforts to promote a unity government, would be safe to assume that the topic of a unity government was in the air in some way or another.

The big question concerns the kind of political maneuvering that Herzog would need to do in order to bring his party into the coalition. Here, too, approval of the budget could make things easier. On the other hand, as long as the right-wing HaBayit HaYehudi remains a part of the government, the task ahead will be very difficult.